Magnetic resonance imaging, developing gradually, has taken a leadership position in the diagnosis of diseases of the brain. Using the properties of the electromagnetic field to change the return pulses of the hydrogen atoms in the cells, MRI provides detailed three-dimensional image of all structures of the brain. Effect on the body is non-invasive, without violating the integrity of tissues and are not bringing harm to the body. 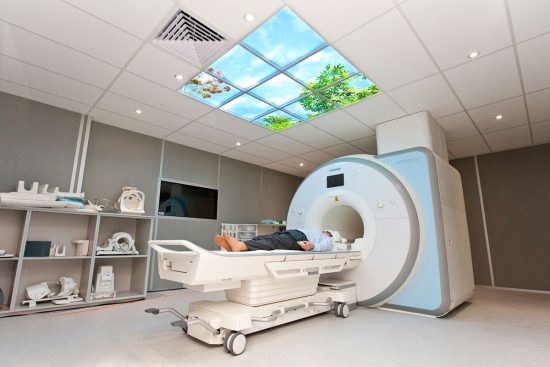 Diagnostic ability of magnetic scanners is increasing every year. The first scanners could create electromagnetic voltage about three tenths of a Tesla. Currently widely used MRI scanners with a field of two Tesla, and sometimes eight, which significantly increases the diagnostic indicators.

The radiologist, making the description and the conclusion to pictures, has no right to perform the analysis of significance of identified pathology, it can only specify the kinds of variances and their location. Conclusion about the significance of the identified deviations, and the method of their treatment makes the attending physician (usually the one that was sent for examination), so the results of the study must be attributed to him. The radiologist may advise the patient to what doctor should contact with identified pathology, if the person came for an MRI without a referral, on their own.

Who treats diseases of the brain?

The attending physician of the patient with disorders of the brain may be a neurologist or neurosurgeon. Typically, doctors in this specialty can decipher tomography. A neurologist or neurosurgeon perform an independent analysis of the tomograms, may not agree with the description and opinion of the radiologist, because in addition to MRI it also performs analysis of the results of examination and other examinations of the patient.

If the doctor doubts and disagreements with the radiologist, usually conducted medical consultation and re-examination.

What is seen on the tomograms?

Different parts of the brain are different in the picture color: from white to black. The contrast depends on the degree of fluctuations of hydrogen protons in the tissue, the impulse which picks up the MRI machine.

In the picture you can see the condition of gray and white matter of the brain, the ventricles (cavernous formations, inside of which circulates cerebral spinal fluid). See all subcortical centers and education, responsible for different functions of the body. Also available for the analysis of meninges and spaces between the bones of the skull, orbit, ear canal and sinuses.

How does a healthy brain?

All the brain structures have to be developed properly, the intensity of the magnetic resonance signal is normal. The ventricular system is developed correctly, a normal size, not enlarged, not reduced. Perivascular, subarachnoid space is normal. Sulcus and gyrus in normal. The structure of the brain is normal size, not offset. Turkish saddle, pituitary gland without pathology. Orbit, nasal sinuses, auditory passages of normal size and shape without signs of pathology. Brain tissue does not have focal and diffuse changes. If used contrast — vessels of the brain are developed properly, uniformly filled with contrast agent.

How to look at images of pathological changes?

In the picture looks like a lighter asymmetric spot with irregular edges (as the – is negative, doctors call it a blackout). Education can deform and displace other structures (ventricles, subcortical centers). Tumor growth, usually accompanied by the rapid development of extra blood vessels in the affected area, so for analysis of volumetric processes used staining.

When ischemic stroke occurs, the area of hypoxia of the brain, on MRI it will stand out with a lighter color, but unlike tumors of the stain will correspond to the pool of innervation of one of the cerebral arteries. When contrast-enhanced blood flow in the area of stroke will be reduced. May be determined by the smoothness of the furrows and convolutions on the affected area. 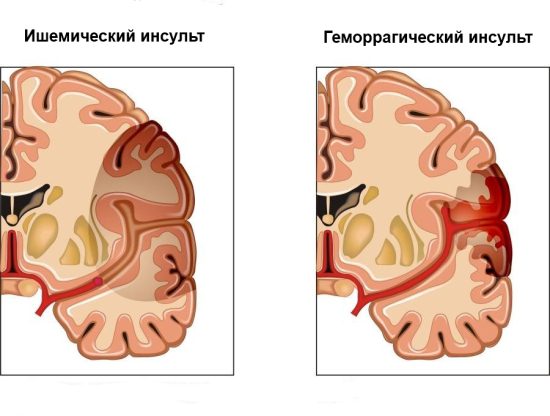 Hemorrhagic stroke is accompanied by rupture of the vessel and the formation of intracerebral hematoma. On MRI scans, is determined by a dark cavity with a ring-shaped strip on the periphery, the thickness of the rings decreases with time.

This group of pathologies include:

It is characterized by the formation of areas of white matter – nerve fibers that lose their myelin (outer) layer. The MRI visible focal education, which accumulate contrast depending on the stage of the disease.

The lesions appear as light areas can be in all departments of the white matter. Their number can vary greatly: from one to tens. In the initial stage of the disease, if detected only one source, it can make for a small lesion. Unlike cancer, lesions in multiple sclerosis will not deform surrounding structures.

READ  Types of MRI machines: differences, which one is better? 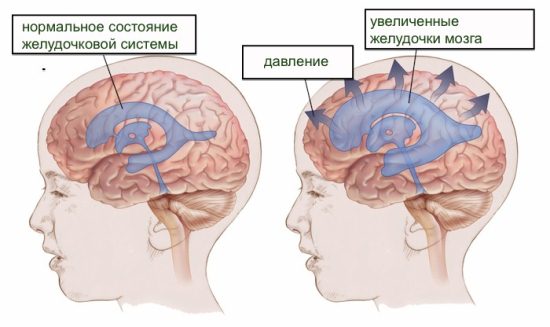 The expansion of the cavities of the ventricles, subarachnoid, perivascular space. Severe forms can be accompanied by compression and atrophy of the cortex and subcortical structures of the brain.

Serious malformations of the brain, usually detected in utero or in the first months of a child’s life. If the anomaly is not exposed to significant loss of any function of the body, to identify it only by accident, during the MRI, which is scheduled for a different purpose.

As no two people are alike, and two identical images of different people can not be. Therefore, to assess the result of the MRI can only be a specialist with sufficient experience and qualifications. It is not necessary to look for abnormalities in the images themselves, since not even all doctors know how to do it right.

Also, do not independently analyze the description of the study, because many different abnormalities may be detected in a healthy person, but such findings are not clinically significant.