CT and MRI: what is the difference, what’s different, what’s better?

Many patients wonder which is better – an MRI or CT scan? This issue was initially incorrect. Perhaps confused by the fact that in both cases, includes the word «imaging», but nevertheless between these two methods there is a fundamental difference. The word «tomography» means scan and MRI, and CT scans allow us to consider the bodies in layers, in three dimensions, which is different from «flat» x-rays, which allow us to consider the bodies is somewhat limited. 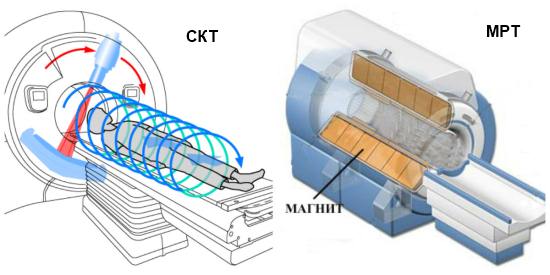 What they have in common and it really is the fundamental difference?

Explaining in simple words, computer tomography is a three – dimensional x-rays. CT scan and x-ray relates to methods of radiation diagnosis, and by itself has on the patient’s radiation exposure. Magnetic resonance imaging (abbreviated as MRI) based on fluctuations of the electromagnetic field. Exposure to the patient during MRI will not occur, but there are compelling contraindications to its implementation: the presence of a pacemaker, surgical clips on the blood vessels of the brain and heart. In addition, the MRI results can be distorted, if in the examined region of the patient’s body is a metallic object: this creates the artifacts that the doctor can be misinterpreted.

The question of the superiority of one method over another is incorrect because MRI and CT have different goals.

Magnetic resonance imaging is preferable in the diagnosis of pathology of the soft tissues, namely:

As for CT, it is better to cope with the visualization of bone structures:

However, a CT scan is effective in diagnosis of diseases of the lungs and bronchi. It can be used for examination of organs of small pelvis and abdominal cavity, but only in three-phase contrast study. CT with contrast shows better localization of the pathological formation, its borders, the state of the lymphatic system in the study area, the nature of the tissues, the condition of pulmonary arteries and veins. Today CT without contrast, as a rule, is not carried out, and it makes it difficult the execution of some categories of patients. CT with contrast is not available to people with allergies to iodine-containing medications and products for patients with diabetes mellitus, people with serious kidney, liver and cardiovascular failure.

One of the most frequent pathologies examined for CT and MRI is a brain stem stroke. The stroke takes the second place in mortality in Russia after myocardial infarction.

In ischemic type of stroke brain the use of MRI up to 90% of cases reveals the lesion within four hours from the time of its development. When magnetic resonance angiography in the coming hours, there are signs of bleeding near the ischemic zone, which confirms the fact of a stroke. In the case of the formation of hemorrhage in the ischemic zone after a day in 35% of cases as determined by the local signal enhancement.

CT differs in that the signs of heart attack are detected in half of the cases, only 12 hours after ischemic stroke. Moreover, the lesions in the trunk and lacunar infarctions are determined only by CT with the introduction of contrasting drugs, that is unsafe due to the toxicity for the brain of contrast agents. Thus, MRI is a more effective method of early diagnosis of lacunar stroke than CT. 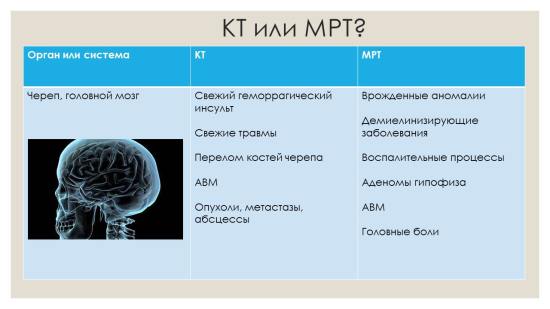 The reverse situation in hemorrhagic type of stroke. Here the computer tomography is indispensable. After 6 hours since stroke, cerebral CT scan reveals a zone of hemorrhage. In this case, the MRI is powerless: it does not detect hemorrhagic strokes in the first hours of the disease, as bad picks up signals from the blood.

In General, and this applies not only to the study of the brain: CT is more effective in the earlier stages, and MRI later. But the combined implementation of these two methods gives the most accurate picture of the disease.

Briefly about all of the above

The diagnosis methods of computer and magnetic resonance tomography frequently overlap, and sometimes require the intervention of CT and MRI. Nevertheless, there are gold standards for each method: the lungs, the organs of the chest and skeleton were examined for computed tomography, and brain and spinal cord, soft tissue, cartilage and ligaments – on-MRI. 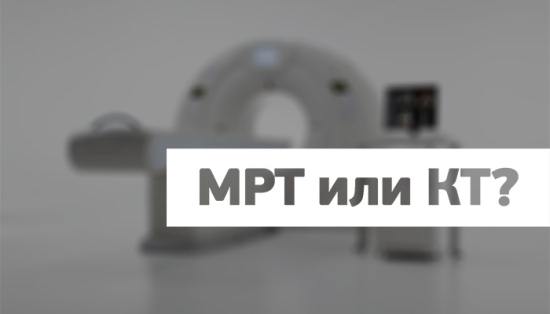 MRI has a number of contraindications and it is impossible to hold certain categories of patients, and CT has the drawback of radiation exposure, which limits the frequency of its use. And the two methods should not be used to diagnose pregnant women. MRI is not prescribed in the first trimester of pregnancy, CT scan is better not to hold in its entirety.

READ  Bronchoscopy lung: what is it and why do it?

Any medical intervention, including diagnostic, has consequences for the patient. Each case has its own characteristics, and the choice of a examination the doctor takes into account their (the patient’s condition, comorbidities, presence of an artificial pacemaker, pregnancy). Suspicion on one or other pathology or forced to make a choice between the computer and magnetic resonance tomography.