CT scan of the bladder

Diseases of the bladder are a common pathology in both men and women. For the diagnosis of pathological processes using different methods: ultrasound, x-ray, is often performed computed tomography and MRI.

In diagnosis using computed tomography, as with x-rays, the use of gamma radiation, but thanks to the layered study of particular organs examination has a high diagnostic ability in contrast to standard x-ray method.

How to perform a scan?

CT is performed using a special device (scanner), which is equipped with a ring mounting, rotating around a patient located on the table in the supine position. On the inner surface of the ring are x-ray emitters, which with its rays permeate the body in a spiral, so a method called spiral CT. Built-in ring sensors detect information and transmit it to a computer for analysis.

Features the study of the bladder

Computed tomography – a method that does not require intervention in the human body, therefore it is considered noninvasive. But a survey of hollow organs, including bladder, difficult if the cavity is empty. Therefore, the bladder is examined in a filled condition.

Currently, CT scan is almost always performed with intravenous contrast. It allows you to render organs more contrast, which improves the detection rates of pathological processes.

READ  X-rays of the lumbosacral spine: preparation, how to do?

For CT use x-ray contrast agents containing iodine, they are administered intravenously before the examination or during the procedure. Contrast injected into a peripheral vein, usually on the elbow. If you need an injection of contrast during the procedure, the device is shut down and the nurse injects the drug intravenously. There are also special injectors providing automatic application of contrast agents in the research process. 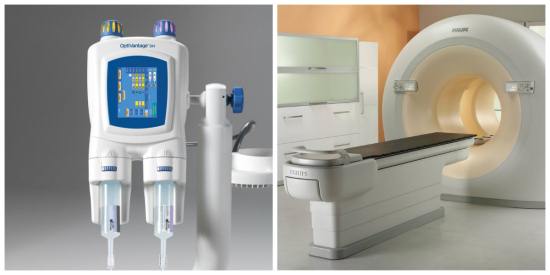 What pathological processes allows to identify the CT scanner?

As the CT scanner performs successive thin slices of the body, it allows identifying virtually any abnormality of the bladder, even at small sizes. But rather complex technology implementation, as well as radiation exposure can be attributed to the CT routine screening methods.

CT is used for detection of bladder tumors. The method allows to detect the tumor of any stage or form growing inside the hollow body, the inside of the bladder wall, as well as the extent of the process in the surrounding tissue and organs, to detect metastasis to lymph nodes.

Except for malignant tumors, CT may detect benign tumors and polyps of the body.

Also clearly visible during the study, the stones inside the bladder and ureters. CT scan shows the size, location and degree of overlap of the lumen of the ureter, which can be a cause of a violation of the outflow of urine. However, performing a CT, the radiologist always remember what the x ray shows that not all the stones, some stones are not visible during the study, these include urate, uric acid stones, xanthine, concretions formed in the background of medication. Alternatively, to detect on an x-ray negative stones can be used MRI.

Inflammatory disease of the body is also visible on the tomograms. On these shows uniform thickening of the walls of the bladder and ureters.

Performing computed tomography after trauma is limited, since if the lesion ruptured on the air or liquid that must be introduced into the cavity for the study, may get into the pelvic cavity, causing pathological processes.

To prepare for the study you must abstain from food, which enhances the formation of gas in the intestines: bread, vegetables, dairy products, carbonated beverages, and chips. The day of the test it is advisable to come with an emptied intestine, if there is a tendency to constipation, the day before the study it is better to do a cleansing enema.

Preparing for the introduction of contrast agents includes complete abstinence from eating for five hours before the study. 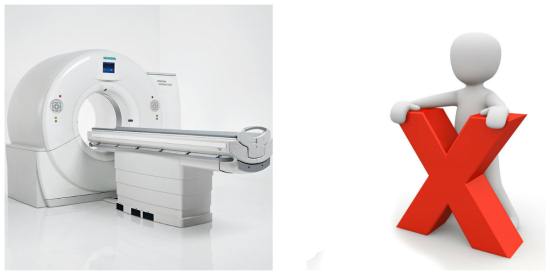 The study is contraindicated during pregnancy and lactation. Because of radiation exposure restricted the use of CT in children. For this category of patients, also alternative will be MRI.

Contrast is unacceptable if you are allergic to contrast agents and iodine, severe thyroid disease and diabetes, and also at infringement of function of kidneys (renal failure).