Emphysema on x-ray: signs and symptoms

Chronic lung diseases are long-term and in the final lead to the development of a condition like emphysema. Emphysema successfully defined a simple but reliable diagnostic method such as x-rays. What are the features of the x-ray this condition exist today? The article describes the main symptoms of emphysema in the pictures.

Briefly about the essence of the disease 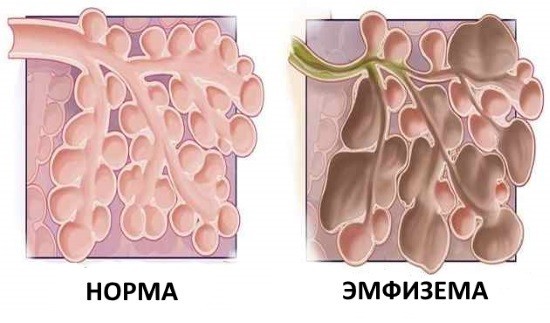 Emphysema is considered the final stage of many chronic diseases associated with inflammation. In addition, increased airiness of lung tissue is characteristic of bronchial asthma and diseases of the parenchyma of the organ. Thus, there are factors in the development of emphysematous disorganization of the lungs:

Emphysema – pathology, encompassing not only the symptoms of structural lesion of the lung tissue, but the functional failure of this organ. The intact parts of the lung do not participate in breathing and gas exchange. Therefore there is a symptom of progressive respiratory failure.

There are two groups of signs of disease when conducting x-ray examination:

In order to evaluate them and to see one picture is not enough. It is necessary to conduct a study in two projections, because the lateral projection (literarly) will be informative in terms of visualization rentgenoradiologicheskijj signs.

A lot of information gives radiography according to the method of Sokolov.

This x-ray method to evaluate the functionality of the lungs. That is, the patient is forced to inhale maximally, hold the breath, and then boosted as much as possible to exhale. At all these stages, record the pictures. With the tunnel cassettes it is possible to consider the lung tissue, lung pattern and other characteristics in terms of functional status.

READ  Is it possible to do EGD during pregnancy, on what terms? 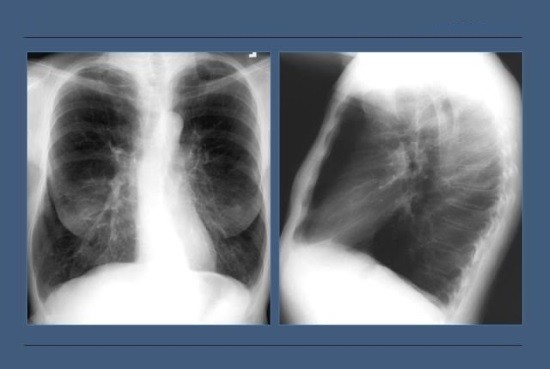 Should first mention that this group of signs refers to secondary changes characteristic of the long drawn-out course of emphysema. They affect the size of the chest, its spatial warping, change syntopia prisoners in her organs and tissues, expressed quantitatively (degrees or inches).

Even representatives of the old therapeutic and propaedeutic schools talked about the fact that in the long lung disease with the formation of respiratory failure develops the deformation of the chest, which can be seen even during the inspection. X-ray examination only confirms the conjecture of outstanding clinicians. Emphysematous deformity is called the barrel. That is, greatly increased anteroposterior size of the thorax. Moreover, this increase can be traced all along the chest cavity.

The change in the mediastinal structures is an important symptom in the diagnosis of lung pathology. Anterior mediastinum from the sternum anteriorly wystawa expanding. Such a change in radiologists is called the dehiscence of anterior mediastinum. Shadows of the heart, aorta and its branches, large venous trunks are pushed posteriorly because of the increase in lung volume due to altered pathological airiness. In itself, the heart can accept atypical. It reminds in some cases, an hourglass or a drop (droplet deformation), which requires differential diagnosis with diseases such as acquired or congenital defect of the heart valves. 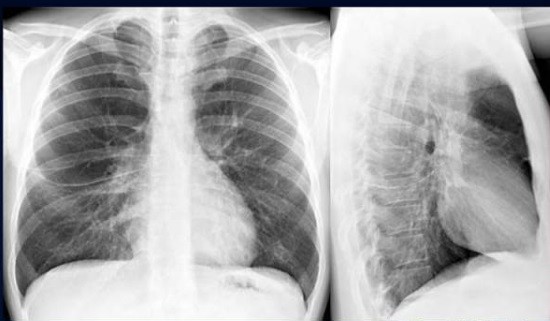 The following is a classic symptom of emphysema – change the transparency of the lung tissue, which is diffusely increased. This phenomenon is formed due to the excess air in the terminal divisions of the bronchial and acinar tree. If there is a deformation of bullous lung tissue, the radiologist will see enlightenment.

READ  How to check the colon without colonoscopy: an alternative methodology

The dome of the diaphragm need to pay close attention. Emphysema it is lower than in a healthy person. Sometimes it may be just a slight bend downwards.

Due to the fact that emphysema cannot occur in isolation from other pathological processes in the lungs, often show signs of sclerotic changes.

Pulmonary fibrosis with emphysema is suspected when pulmonary drawing becomes «excess» and deformed. Sometimes the root of the lung even fit. 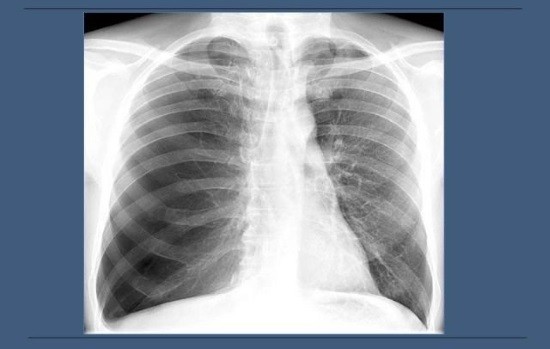 Respiratory failure is also reflected when x-ray diagnosis of the disease. Usually, fluoroscopy of the lungs expert on this imaging technique very clearly sees the decrease in mobility of the diaphragm. In a healthy person the amplitude by the muscle movements sufficient. Emphysema, this value progressively decreases.

According to previously described methodology Yu. N. Sokolov is possible to estimate the functional state of the lung tissue. Normally, the intensity and contrast of the structures when carrying out snapshot varies depending on the phase of respiration. At the same time for emphysema are characterized by reverse painting. These figures did not significantly change. It’s quite a specific symptom of the disorganization of the emphysematous lung tissue.