MRI during menses: is it possible to do?

Magnetic resonance imaging is one of the most effective ways to diagnose diseases of different organs and systems of the human body. Women usually are concerned about the possibility of MRI at monthly. The concern is due to two reasons: first – doesn’t the study in the period of menstruation the female body, and the second will not have any menstrual cycle effects on the MRI results.

Magnetic resonance imaging – a method based on the properties of the electromagnetic field, which modifies the response signal of hydrogen protons in body tissues, allowing you to create detailed, high-contrast images. Doing the MRI with the help of a special device – scanner, equipped with a cylindrical cavity inside which the electromagnetic field is created. Inside the capsule the man is placed in the supine position.

MRI is used to diagnose various pathologies for almost thirty years. During this time, the influence of electromagnetic waves has been completely studied and proven their safety for the body. Therefore, to make the imaging possible for pregnant women and young children and even replicate the study if necessary multiple times in a short period of time.

Sometimes women experience a excitement, if after investigation, your period is not started on time and there was a delay. This phenomenon can be explained only by emotional overstrain before the test, which requires a stationary position in a confined space for at least thirty minutes. The influence of electromagnetic waves, the delay can not be caused.

But, if the delay of menstruation occurred prior to MRI, it is better to find out her reasons before the study. Doctors do not recommend MRI in the early period of pregnancy, which may be related to delayed menstruation.

The influence of menstruation on the result of the study

The physiological state of women during menstruation can not affect the result of MRI of the organs of the head and neck, musculoskeletal system, systems of the abdominal and thoracic cavity. But to perform the procedure in the pelvic area the first six days of the cycle are contraindicated.

This is due to the physiological changes in a woman’s body during the menstrual cycle. The average is twenty-eight days and is calculated from the first day of menstruation. During each cycle female reproductive system prepares for pregnancy, so for twenty-eight days her body is undergoing significant hormonal changes that affect the condition of the reproductive system.

During the cycle in the uterus is thickening of the inner layer is the endometrium, the ovaries Matures an egg and a mid-cycle (ovulation), it emerges from the follicle into the cavity of the fallopian tube, ready to meet with the sperm. Hormones prepare the reproductive organs for pregnancy. If fertilization does not happen, the egg dies, and then the lining of the uterus begins to be updated, rejecting the extra layers. So begins menstruation.

If an MRI test is scheduled for pathology in pelvis, during menstruation, the result may be incorrect for various reasons: 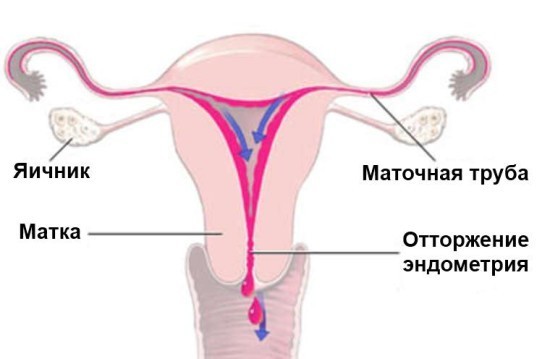 To avoid ambiguous results, MRI of the pelvis in women is recommended to do after the menstrual period (from the sixth to the twelfth day of the cycle), or after the eighteenth day.