MRI of the spine: preparing for examination

Magnetic resonance imaging of the spine is considered the leading method in the diagnosis of diseases of the spine and is widely used in neurology, neurosurgery, Oncology and traumatology. When getting directions to this survey patients to ask questions about the dangers, about how to prepare for the procedure, how long it lasts in time, does not hurt to do and what to bring with you.

Preparation for magnetic resonance imaging of the spine is considered simple and does not require patient action. It is important to clarify the question about the use of a contrast agent depends on the plan of preparatory activities. When writing for tests you can specify the list of necessary documents, often in some clinics require an extract from the history of the disease, while others need only a passport.

Not all clinics give out disposable diapers, some requires its own sheet in order to put it on the scanner couch. For your own comfort, you should take care of it. Do not interfere, and a bottle of water immediately after a lengthy process, often thirsty. Before scanning, you should go to the toilet.

Do I need to diet before the examination of the spine?

For crisp shots before the procedure MRI of the spine do not need a special diet because the digestive organs are not involved in the scanning, you can eat any products.

In the case of use of a contrast agent, doctors recommend to do an MRI on an empty stomach – not eating for 5 hours before the study. This is because the contrast dye may cause nausea, reaching to vomit.

READ  On what day of cycle do laparoscopy in gynaecology?

In that case, when the patient is first time in my life, it takes study with the use of contrast and history is allergic to drugs, experts advise before diagnosis to prepare is to do a skin allergodil. On the skin of the forearm with a special scarifier make a shallow scratch, which dropped the contrast agent based on gadolinium. The appearance of the blister, redness, itching, and redness indicate a positive reaction, and the use of contrast in this case is not recommended – in severe cases, when administered intravenously, may develop anaphylactic shock — a life threatening condition requiring emergency care.

The patient comes into the office, having removed the ornaments, pulling out his keys, phone and Bank cards. You can leave them in the safe outside the office in the event if the patient is unescorted. The assistant helps him to lie down on the couch into position on his back, captures the special straps and clamps, then dispenses earplugs in and out. The couch with the patient goes into the scanner, where the scanning is done.

Throughout the time of examination the patient should lie still, the procedure takes about half an hour. The study did not cause any feelings, it doesn’t hurt, the man feels nothing, except the noise of the MRI scanner. If necessary, you can contact a specialist in internal communication, as a rule, it is always enabled it the doctor monitors the patient’s condition.

Frequently asked question – is it possible to make a scan of the entire spine at once? It is possible, but will have to spend in the scanner for a long time, so it is better to break the study for a few days.

Sometimes there are situations when a pregnant woman needs to do an MRI of the spine. Does it harm the fetus? Magnetic resonance imaging is considered a safe method, so pregnancy is not an absolute contraindication to the examination. This study does not use harmful ionizing radiation has teratogenic properties, the basis of MRI is the phenomenon of electromagnetic resonance – the ability of hydrogen atoms to be excited under the influence of electromagnetic waves. 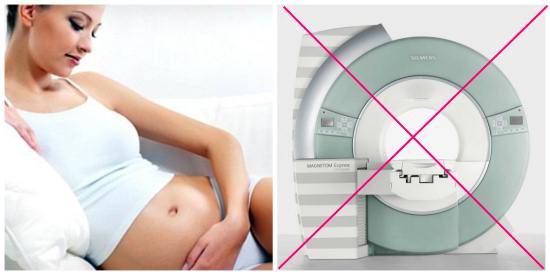 It is not recommended to do an MRI on the first three months of pregnancy – at this time there is a bookmark all organs and systems of the fetus. This limitation is due to the fact that running the scanner emits large amounts of heat and loud noise, and it was during this period the fetus is most sensitive to the negative environmental impact. However, if necessary, research can be done in the first trimester of pregnancy in the case when the benefits of the procedure outweighs the potential harm. When performing MRI of the spine pregnant, you cannot enter the contrast it is able to penetrate the placental barrier and cause adverse effects on the fetus.

How harmful is the procedure and how often is it done?

Research on magnetic resonance imaging is not harmful to pregnant even when all the conditions. It is important not to forget that for MRI spine is an absolute contraindication. Patients with pacemakers, vascular stents, application of Ilizarov frame and other metal objects in the body, scanning not to do. In the case when the patient has removable dentures, the doctors recommended before the test to remove them – despite the fact that they are made of special alloys, their presence can make the image fuzzy. MRI with contrast is contraindicated in pregnant women, patients with allergies or renal insufficiency.

How many times without any harm you can do an MRI? Due to the fact that MRI is a safe technique that allowed him to repeat frequently if there are indications. However, this does not mean that it should do what you want, and in any unclear situation, sometimes you can get other, cheaper ways of diagnosis.