The most common cause of enlightenment lung fields on the radiograph is pneumothorax. This is a dangerous condition that occurs as a result of hit of air in a sealed before the pleural cavity. It occurs in people without pathology of the lungs, as a complication of other diseases or injuries. Due to this condition drastically reduces the mobility of the lung, it collapses. The body lacks oxygen, accumulating carbon dioxide, hypoxia, and electrolyte composition of blood. Later, you may develop hypotension and cardiac arrest.

To diagnose pneumothorax only physicalnum data and complaints can be difficult, therefore, for setting the correct diagnosis using x-ray methods of diagnosis.

It can be seen the edge of the visceral pleura, in the form of very thin white line, which is separated from the parietal leaf of the gas space. The mediastinum shifts to the affected side (unless we are not talking about tension pneumothorax). Also on the x-ray may be subcutaneous emphysema. When the hard form is also observed displacement of the diaphragm down.

In doubtful cases can be taken in the lateral projection. Then will occur the «falling away» of the lung from the chest wall. When holding pictures on the inhalation and exhalation in the expiratory phase of the light becomes smaller and denser, the size of the pneumothorax is not increasing.

In cases where the patient is in a serious condition, not allowing to carry out x-rays in a straight vertical projection can be done in the horizontal position of the person. Then radiographic signs are bad. Deep costal-phrenic angles and changes in size of the lungs is all that you can see in the picture in this case. 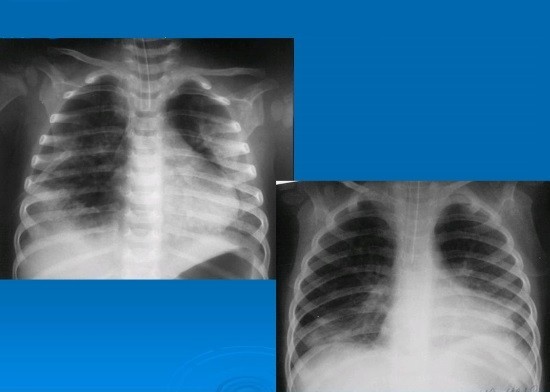 Depending on when the pleural space with the environment, a pneumothorax can be:

In the first case, the pleural cavity, or has an injury, they closed or something (pieces of tissue, a blood clot, pus, pus), and the tightness of the pleural cavity is restored. This is the most favorable type of pneumothorax. On the radiograph it shows the classic enlightenment pulmonary fields.

Also, the cause of enlightenment lung fields may be multiple emphysema and reducing the amount of soft tissue, reduced blood flow to the lung, for example, on the background of cardiac diseases. However, to distinguish them from pneumothorax is not difficult, because when it against the background of enlightenment is no pulmonary pattern and see the edge of the collapsed lung. Anemia it will only be depleted and weakened, but still visible. Emphysema is increasing due to the expansion of pulmonary artery and its branches.

At the same time, during a series of images with a certain interval, the picture remains stable, the amount of air or the size of light do not change. With a small amount of gas it can go away on its own, and the light will unfold itself. 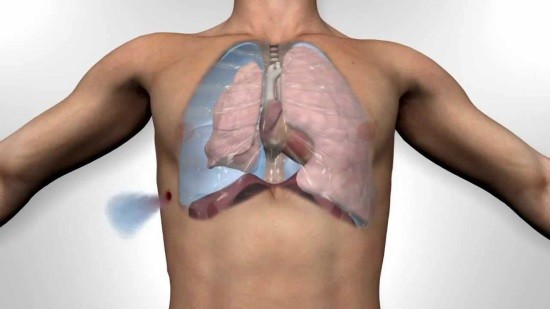 About the open pneumothorax they say in those cases, if there is a channel connecting the pleural cavity with the environment. The pressure in the cavity of the chest becomes equal to atmospheric, which negatively affects the lungs collapse enough will not participate in breathing that is accompanied by rapid increase of the symptoms. Quite often associated with hemothorax, which can complicate diagnosis. You need to remember that pneumothorax causes the liquid level becomes horizontal, while with isolated hemothorax it will be curved.

Most dangerous is a tension pneumothorax.

The name suggests that when it formed a structure resembling a valve. It lets air flow in one direction only, from the external environment into the chest cavity. This leads, first, to a very rapid buildup of intrathoracic pressure, and, secondly, to the fact that this pressure may exceed atmospheric. This contributes to irritation of nerve endings located in the pleura, and development, resulting in a state of shock.

In addition, the gas pressure greatly displaces the mediastinum, which impairs their functioning. Possible compression of the heart, trachea, large blood vessels. This breaks the rhythm of the heart develop life-threatening arrhythmias, is the compression of blood vessels and a sharp circulatory disorders, developing a state of shock. On the x-ray valvular pneumothorax is characterized by a pronounced shift of the mediastinum to the healthy side, while in other types of pathology they shift to the affected side.

There is also a separate type of disease called plumeveil pneumothorax. He has a small amount of air, which is located on the periphery of the lung, merging with the line of the pleura. It’s hard to notice, as on the radiograph, it is presented only in the form of thin dark stripes between the pleura and the lungs, and may mistakenly be perceived as the norm.

Further the use of x-rays

The peculiarity of the x-ray if pneumothorax is that control can be performed therapeutic manipulation.

Under x-ray observation physicians may perform a needle aspiration, thoracentesis and setting drains. For the evacuation of air in the pneumothorax can be used syringes or unilateral drainage in Bühlau. 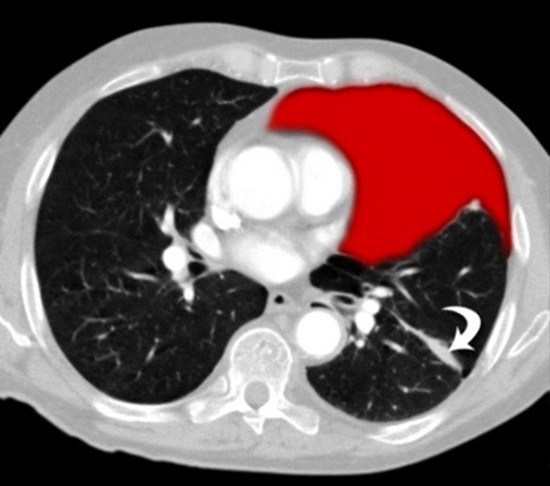 Alternatively, can be used computed tomography, which, however, does not give any particular advantages. It can show a picture of the collapsed lung, allowing to evaluate the quantity of air and its localization in the thoracic cavity, but its implementation takes more time and is not always possible. Although, sometimes CT scan can reveal signs of pathology that are not visible on x-ray.