Types of MRI brain with and without contrast

The human brain is a complex organ that plays a huge role in the functioning of the whole organism, however, it is the human brain still remains poorly understood. Any faults in the work are recognised painful condition of the body, so it is very important to diagnose possible pathology. The most informative method of examination is currently considered MRI — safe study, which allows for a short time to scan all the brain structures. 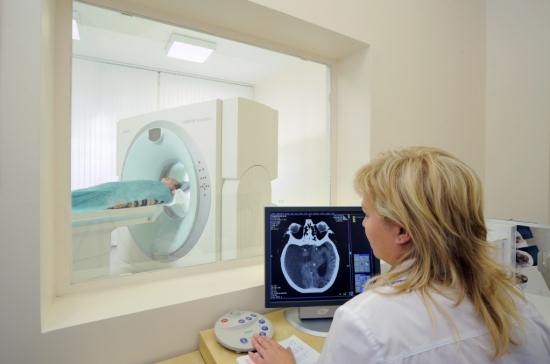 There are several types of brain MRI: magnetic resonance imaging with contrast and without, and MRI in angiooedema. To conduct each species there are clear indications, it is best to consult with your doctor.

The use of contrast agent during the scanning of the brain significantly increases the efficiency of the survey. Often contrast-enhanced MRI is used for diagnosis of tumors and identification of metastases. A contrast agent is injected into a vein immediately before the procedure and is a non-toxic compound on the basis of gadolinium. After entering the vein, the contrast passes through the blood vessels to the brain and accumulates in its tissues, improving the visualization — due to the increased content of blood tumors and metastases are visualized better.

In addition to diagnosis of tumors to conduct a contrast study, there are other indications:

It MRI with contrast allows you to see the tumor is small, located in remote places. It is also possible to see pockets of activity in the brain in the diagnosis of multiple sclerosis. Clearly visible lesions that are small in size, it is possible to determine the boundaries of the tumor, the nature of its growth and to clarify the structure of education.

Magnetic resonance imaging with contrast shows in the disputed and uncertain clinical situations.

In MRI mode angiography is a promising method of diagnosis, allowing to assess the condition of the circulatory system of the brain. This study is a breakthrough in the diagnosis of vascular diseases of the brain due to its safety – the method is non-invasive and doesn’t require the recovery period, unpleasant for the patient. Through this study it has been possible to identify the presence of aneurysms and vascular malformations, diagnosis of stroke, to establish the localization of the stenosis of arteries and veins, which are often the cause of headaches.

Contraindications to the research

Distinguish common to all methods contra-indications. These include:

What type of imaging is best?

It is impossible to answer the question, what research is better and what should be done. Each method has its advantages and clear indications, selection of type of examination depends on the specific clinical situation. Magnetic resonance imaging with contrast is considered a more accurate method than MRI without contrast, covers a greater number of diseases and gives more accurate results in cancer research, however, some cases, the use of contrast agents is impractical because it is enough to make a normal MRI, and the cost of services with higher contrast. Mr-angiography is more expedient for spending in case of suspected disease, because the object of study are the blood vessels of the brain.