What is CT in medicine: how it works

Computed tomography is the method of layer-by-layer imaging of individual organs or parts of the human body using x-rays and computer processing of the obtained data.

The method of computer tomography and planar medical radiography is based on the ability of different tissues to a different degree, to absorb and to pass the ionizing radiation, but the principle of operation of CT scanner and film x-ray machine is fundamentally different.

How is the image result of CT?

When receiving a planar x-ray radiography of the patient’s body and receiving the image on the film occurs at the same time. The picture reflects the total absorption of the x-ray beam when passing through all layers of the investigated area. The ability to absorb radiation is called x-ray density. The higher it is, the less rays hit the film and, as a consequence, the image will be lighter.

When conducting computed tomography uses a completely different principle: the research field of virtual divided into microscopic cubes – voxels (from the English. volume element – volume elements). For each of them in the course of computer processing the data will be calculated their own value of x-ray density. The higher it is, the brighter the pixel (from the English. picture element) corresponding to this voxel plane on the picture of the slice. The image acquisition takes place in two stages: 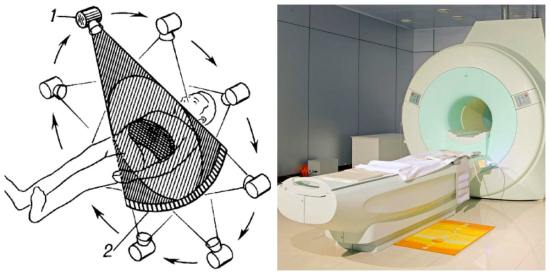 This is interesting: the computing unit of the scanner forms the image, counting x-ray density for each pixel. To do this, the processor has to solve a system of equations compiled on the basis of the scan data.

What structures can be seen with CT?

CT in comparison with radiography has greater sensitivity. If the summation of planar image contrast perceived tissue with the difference of the x-ray density of 10-20%, on computer scan can distinguish areas that differ by only 1%. To refer to tissue density using relative densitometric scale of Hounsfield: 0 accepted density of water, positive values have muscles and bones, negative adipose tissue and air. Only the scale has more than 4 thousand steps, which is sufficient to obtain contrast images of both bone and soft tissue if the scan settings defined correctly. 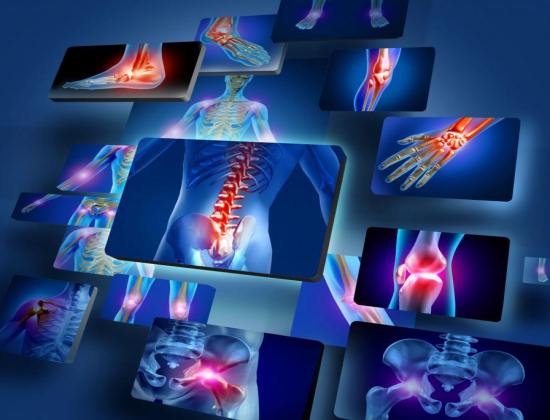 The CT distinguishes more than 4 thousand gradations of x-ray density of the tissues, while the monitor can transmit only 256 shades of gray. To preserve accuracy, use the recalculation of grades in the range of interest: bone, magadane or pulmonary window.

In medicine, computed tomography is used to study such bodies as:

Multislice computed tomography and its possibilities 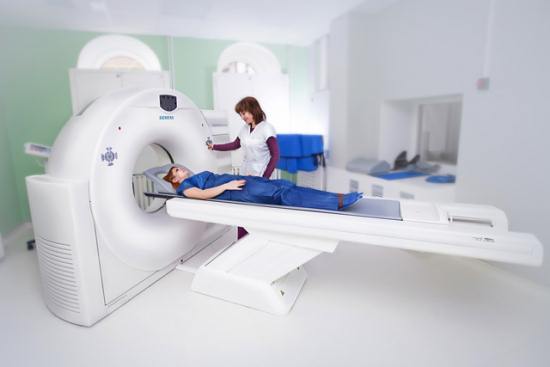 The principle of operation of multislice computed tomography differs from conventional sequential because the scan is rotating and multiple fixed in place and located around the body of the patient sensors. This allows to increase the scanning speed. This gives the opportunity to image organs that are in constant motion, for example, of the heart. With the use of intravenous contrast with CT it is possible to image the coronary arteries is completely noninvasive technique, so this study is considered to be a brilliant alternative to interventional coronary angiography.

MSCT of the chest with contrast – non-invasive procedure, not yielding to the informativeness of interventional coronary angiography.

The rationale for assignments, risks and limitations of the method

Health risk to the patient during CT may be associated with the action of ionizing radiation or reaction to the substance used for intravenous contrast. In the first case, the physician must justify the purpose, after weighing the anticipated radiation dose, the value of diagnostic information, its availability at carrying out of alternative examination methods and the risk of potential diagnostic errors in the rejection of the CT. 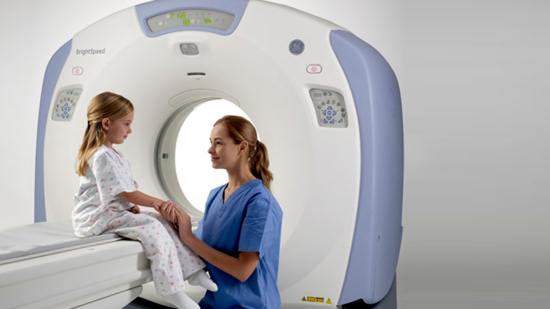 The study is contraindicated in pregnant women and young children is appointed with caution. Contrast not used in renal pathology, diabetes, pregnancy, thyrotoxicosis, and General condition of the patient. If the indications for the study is clearly defined, and the necessary information cannot be obtained by other means, imaging can be performed as many times as necessary.

The amount of radiation exposure, as well as the diagnostic capabilities of the method depend on the class of the device and the professionalism of the radiologist, which sets individual parameters depending on the presumptive diagnosis and the Clinician information. The description that is handed to the patient after imaging, may not contain the final diagnosis. No matter how clear were the signs of the disease on CT, this study remains in the auxiliary medicine, and the diagnosis must be confirmed by clinical and laboratory data.