Despite the advent of modern methods of research and their introduction in clinical practice, the diagnosis of tuberculosis of the lung is carried out using x-ray examination. At the stage of screening is often a digital chest x-rays, less x-rays. This is due to the fact that radiation exposure the last few above. X-ray for tuberculosis is significant, if the affected lungs and bronchial structures, lymph nodes (bronhoadenit). Pulmonary diagnosed otherwise. 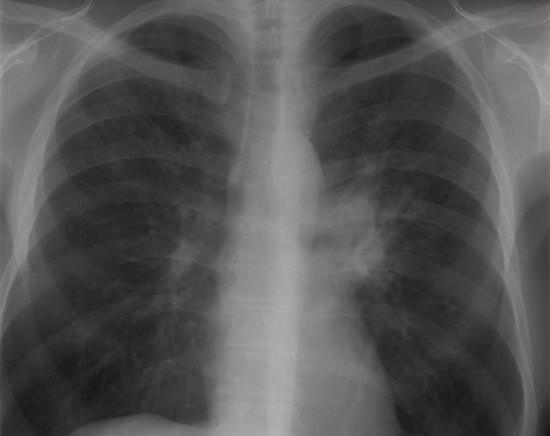 Tuberculosis in children is not always accompanied by damage to the lung tissue, which was visualized would be in the picture. There are such forms as:

The process is in stages. As a rule, with timely and adequate treatment from infiltration later remains a focus of Gon.

Differential diagnosis should be conducted with a specific or non-specific pneumonia.

In this case it is necessary to focus on such radiological signs as limfangoit connecting the diseased root of the lung (a characteristic component of the disease) with the infiltration of various degree of development. Complement the study of clinical and microbiological diagnostic methods.

Dissemination – the process of distribution of drop-out from initially emerged foci of mycobacterial disease. First we need to list all the signs of metastatic lung lesions:

Disseminated tuberculosis it is quite clearly seen on a normal x-ray. This lesions, whose diameter does not exceed 2 cm. Their number can be quite different, but they affect at least 2 segments of both lungs.

READ  Laparoscopy of the kidney: cyst resection, removal of stones 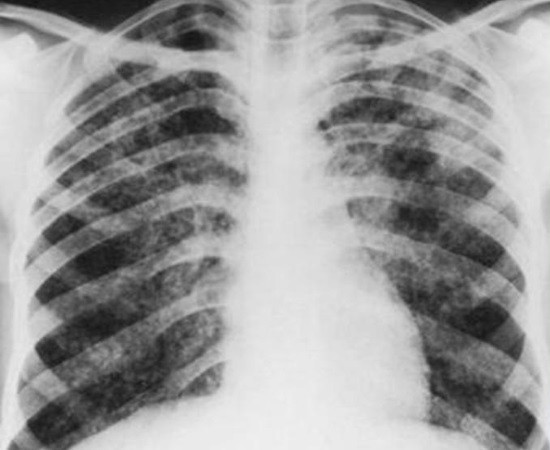 For miliary tuberculosis is characterized by clarity of contours (pockets «defined»). But it is important to remember the dynamics of the process. First clear signs of tuberculosis, the picture may not be visualized – there is only oiled pulmonary figure, somewhat reduced transparency fields. However, after a week there are numerous foci, the size of a millet grain, zapolnaya almost the entire x-ray projection of lungs.

Subacute disseminated form on the x-ray looks like a conglomeration of «pressed», the same type of blackouts is approximately the same size as when miliary tuberculosis. An important feature is symmetry. It is distinguished by the subacute development process from other types of dissemination. Typical localization of changes of the upper lung. For this variation of the disease typical symptoms of change of x-ray: infiltration is replaced by the formation of cavities.

Radiography in chronic dissemination showcases along with an abundance of cavities in all lung fields signs of long-standing pathological process in pulmonary tissue. Obvious fibrosis. If you pay attention to the roots of the lungs, we can see that they are tightened. It is possible that the reduced size of the lung. But that says more about such an outcome, as a cirrhotic deformation.

Pulmonary tuberculosis may progress with the development of focal blackouts. In the absence of adequate or timely treatment of foci transformirovalsya in infiltrative changes. For them is typically the development of limfangoit and response from the pleural cavity in pleurisy.

Radiologists distinguish the following varieties of focal tuberculous lesions of the lungs:

READ  Colonoscopy bowel: if it hurts or not without anesthesia?

Pleural effusion is a frequent finding radiologists. Pleurisy often becomes a reason for seeking medical help, because clinically, it manifests quite clearly. When in the pleural cavity accumulates a sufficient amount of effusion, the following symptoms in the picture:

Round and ring-shaped shadow 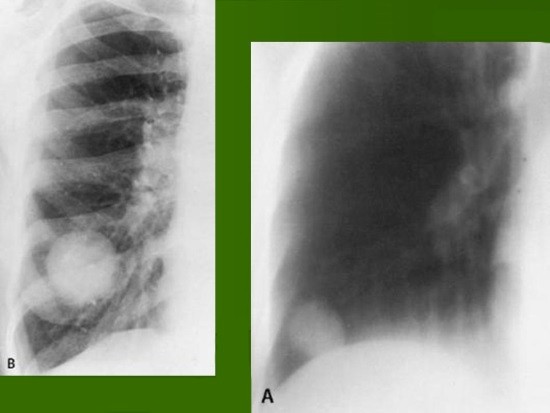 The formation of tuberculoma is often preceded by focal forms of tuberculosis or the development of its pneumonic form. This kind of on the radiograph appears curved shadow. In her column enlightenment is possible, which is usually Crescent-shaped (like a Crescent) due to the collapse of the lung tissue. In fact, it is the development of capsule around the foci of tuberculous lung lesions.

An important feature of this clinico-radiographic form of the disease – the clarity of the boundaries. Their appearance is connected with the development of the perifocal inflammation.

Clinicians and specialists in imaging techniques there are three forms;

Dangerous in epidemiological terms is cavernous form. This development of a thin-walled cavity, which sooner or later communicates with the bronchus is drained. This cavity contains the destroyed lung tissue and the pathogen – Mycobacterium tuberculosis (tubercle Bacillus). The patient often feels the need to cough, thereby releasing the pathogen from the sputum in the environment.

In the picture, the cavern looks like a ring-shaped shadow. Usually its walls are thin. There is a triad of signs of tuberculous cavity on the radiograph:

READ  When an ultrasound is carried out after caesarean section

Syndrome ring-shaped shade is very carefully differentiated from tumors, parasitic diseases, benign tumors in the lung tissues. It is better to perform a CT study.

Diagnosis of fibrosis and cirrhosis 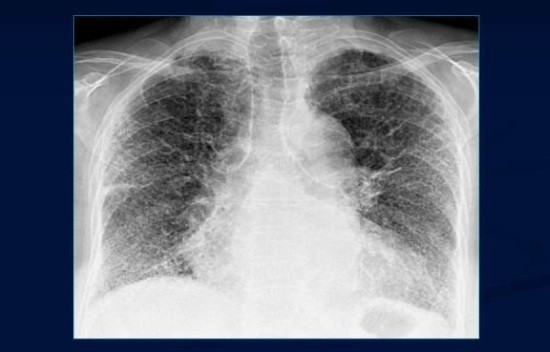 The outcome of any pulmonary disease which runs a chronic, – the development of respiratory failure. Its morphological substrate in the case of development of tuberculosis – fibrosis turns into cirrhosis of the lung tissue.

Fibrosis is a replacement of the normal cells (alveolitis) in connective tissue fibroblasts. Thus, the dimensions of light are significantly reduced. Resizing leads to disruption of the architectonics and syntopia of the chest.

Typically the pulling up of the roots of the lungs. He is deformed. The mediastinum is also displaced to the affected side. Changed the course of the large vessels. They are thin, elongated in the longitudinal direction. Radiologists call this syndrome «stretched strings».

Radiological diagnosis of tuberculosis only in conjunction with clinical signs, not always allows to make a correct diagnosis. For this you need to conduct some additional research: Diaskintest, microbiological analysis, determination of drug resistance. But all this does not detract from the importance of x-rays in order to clearly identify the primary hypothesis for the Clinician to solve diagnostic problems.