X-rays (x-rays) of the esophagus with barium: preparation, conduct

To examine the upper gastrointestinal tract (GIT) in several ways: on the radiograph, when performing a CT scan, and endoscopy. Radiography of the esophagus, although not without its flaws, is among the highly informative, and safe research. Patients tolerate the procedure well. It is painless and rarely leads to complications. 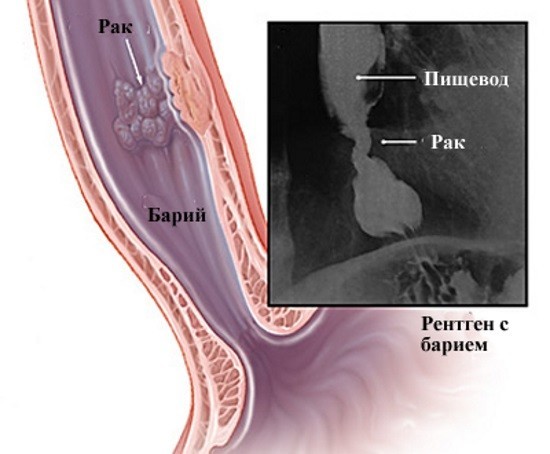 X-ray examination of the esophagus combines the techniques of x-ray (image) and fluoroscopy (observation in real time). This method of diagnosis allows not only to obtain an image of the pathological process, but also to assess the functionality of the body, its mobility, speed of evacuation of contrast agent. 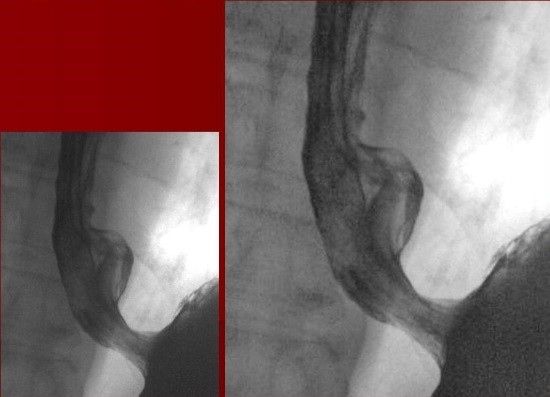 X-ray with barium allows us to detect many pathologies: constrictions, tumors, congenital anomalies, ulcers, diverticula, and motility disorders. Image of the esophagus in the picture you can indirectly judge the state of adjacent organs. Indications for x-ray study with barium are:

When x-ray examination of the esophagus contraindicated:

X-rays, while relatively harmless procedure, not shown for all patients. Special attention should be paid to contraindications, the disregard of which can lead to life-threatening consequences: the probability of getting barium to the respiratory tract and development of asphyxia, intolerance to the drug. 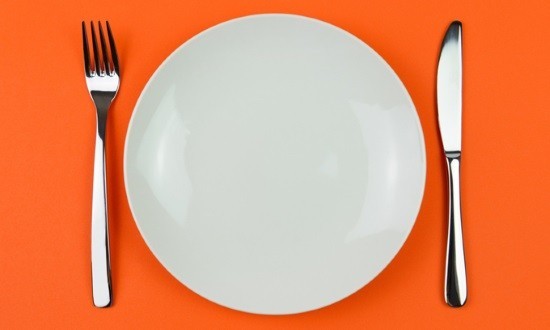 Preparation for the procedure is similar to that before x-rays of the stomach. This is because often, after examination of the esophagus transferred to the examination of the lower gastrointestinal tract. Sometimes the decision to expand the diagnostic search is received directly during the procedure. For example, detection of tumors, especially with signs of malignant growth, is the indication for the examination and of the stomach. Indeed, in the case of surgical treatment of the latter will be subjected to resection, and the information about his condition is extremely important for the attending physician.

Preparing for x-rays of the esophagus includes:

READ  CT liver with contrast and without

If the patient has disorders of the digestive tract, the preparation can be expanded to perform additional procedures:

Preparing for the examination does not differ from that of adults. Reduces only the time of forced fasting before the test. For patients younger than years, this period is 4 hours, over the year – 6 hours.

As the picture is taken? 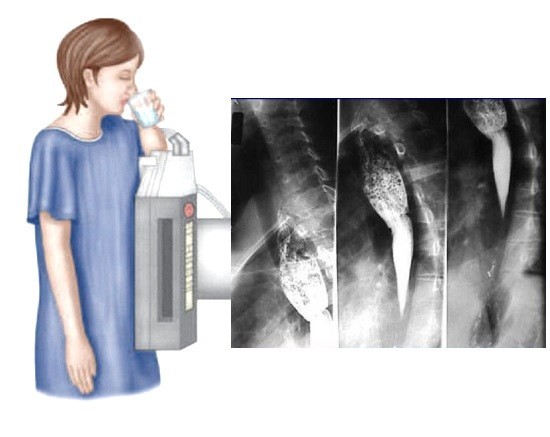 The first SIP should be small in volume. It is necessary to assess the functional state of the esophagus and detection of the expressed narrowing, can become an obstacle for the promotion of the contrast. If the permeability of the body is considerably broken, the introduction of a large amount of the drug will only lead to unpleasant feelings in a patient and vomiting, but does not increase the informativeness of the study. If we pass the esophagus, the patient drinks the whole Cup of barium.

The study is conducted in the vertical and horizontal position of the patient. The first position helps to evaluate the shape, the location of the body, as well as the speed of advancement of it of the contrast agent. The second is used for detailed examination of pathological formations, because in this position the evacuation of barium into the stomach is slowed down.

During x-ray examination of the esophagus following laying of the patient:

In the front direct projection may be done in the Trendelenburg position. In this case the foot end of the table rises at an angle of 45°. The pelvis of the patient is above his head. This position helps to diagnose the hernia hiatal. 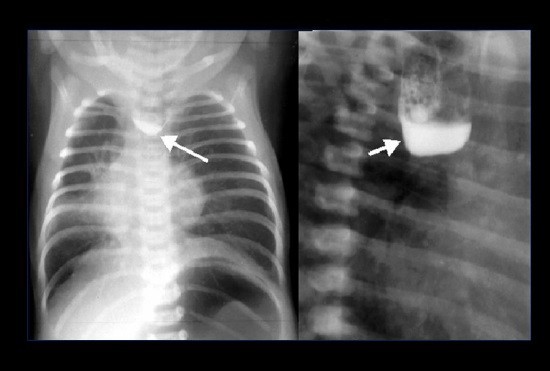 Normally, the esophagus in the picture is a strip of uneven width, with anatomic narrowing in the entrance area, adjoining thereto in the aortic arch and left main bronchus, passing through the diaphragm. The contrast fills the study on fully. The contour of the esophagus is smooth. The barium passes through the stomach within 3-5 seconds in a vertical position, and 8-10 seconds in the horizontal.

How does the pathology of the esophagus in the picture: 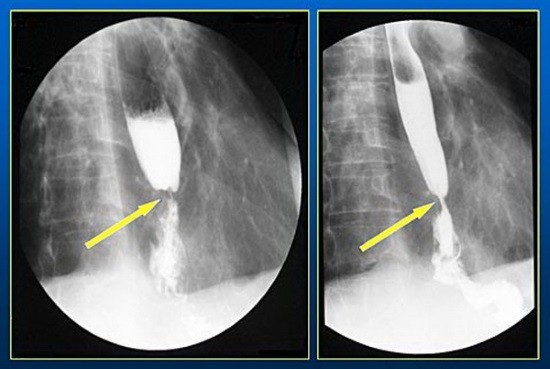 READ  Breast ultrasound: when to do? 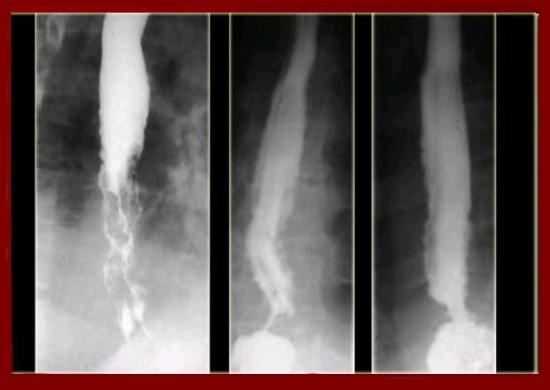 The offset of the esophagus is an indirect manifestation of the pathology of adjacent organs. So, enlarged lymph nodes of the posterior mediastinum with chlamydia or metastatic lesions leads to the formation of impressions on the wall of the esophagus or marginalization.

The dose of radiation when performing radiography of the esophagus is 0.1-0,8 mSv for digital and film apparatus, respectively, when fluoroscopy is 3.5 mSv.

Other methods of examining the esophagus

Computed tomography (CT), and x-rays, associated with the irradiation of the patient. However, compared with CT fluoroscopy has the advantage. The image depicts not only the esophagus but also the nearby structures. Tomography allows to estimate the wall of the esophagus, which is impossible for x-rays. It is important to diagnose the tumor and determine the extent of their distribution. However, to investigate the condition of the mucous CT and fluoroscopy difficult.

Endoscopy (EGD) allows you to inspect the esophagus from the inside. At the same time is investigated and the stomach. Method allows you to experience firsthand all of the pathological changes in the oral mucosa, if necessary, to take material for biopsy. During the execution of the endoscopic examination can be performed and therapeutic measures, e.g. removal of a foreign body. However, to assess the location and form of the organ, the status of neighbouring entities this procedure is not suitable.