Biochemical analysis of blood is determination of the level of substances that characterizes the quality of the metabolism in the body. The advantage of the analysis is its fast results (only 1 – 2 days). The indicators reflected in the biochemistry, help the doctor to identify the quality of metabolic processes, which by instrumental methods of research are not defined. The analysis is used as the diagnostic purpose and for monitoring the dynamics of the disease.

Biochemistry of blood. What is it?

The study of blood on the content of certain enzymes, trace elements, biologically active substances, sometimes hormones. The analysis allows to determine the functional condition and operation of such structures as liver cells, kidney tissue and pancreas. Very often this analysis reveals hidden pathology when outwardly the signs and symptoms of the disease yet, but in the biochemical condition of the blood already there are changes.

What defines the biochemical analysis of blood?

Of proteins biochemistry can determine the albumin, globulin (blood proteins), myoglobin (muscle protein), transferrin (protein that transports iron), C-reactive protein or inflammatory factor (CRP) – shows the level of inflammation in the body. Of enzymes this analysis will help to know the number alaninaminotransferase (ALT), aspartataminotransferase (AST) – liver enzymes, amylase, lipase, protease enzymes of the pancreas, as well as phosphatase, cholinesterase and others.

Of the lipids determine the different density cholesterol (HDL and LDL) and total cholesterol. From carbohydrates the most common is glucose (sugar) in the blood, of the pigment – bilirubin (direct and indirect fractions). Creatinine, urea nitrogenous bases that characterize the excretory system of man, that is kidneys. Often the biochemistry of appeal for the determination of trace elements (sodium, potassium, chlorine, iron, calcium, magnesium, phosphorus) and vitamins (B12, or cyanocobalamin), and folic acid. 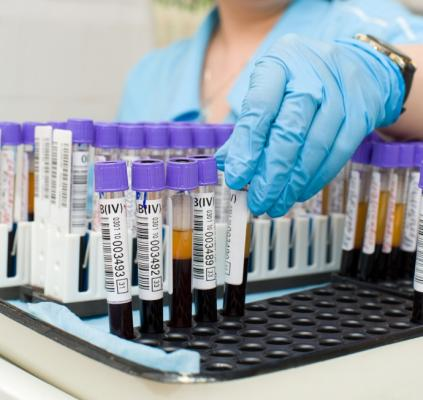 READ  Diet after heart attack for men and women

Interpreting the results of blood biochemistry

1. The amount of total protein and its fractions. The functions of proteins include building of new cells, transport of substances, participation in the immune response and blood clotting. The definition of this parameter is very important in identifying pathology of metabolism. In summary there are three fractions of blood proteins – albumins, globulins and fibrinogen. Decrease of protein (called hypoproteinemia) is observed in infectious processes, starvation, burns, malignant tumors, bleeding, reduced liver function (albumin and globulins are synthesized by liver cells). Also the physiological decrease of protein can be in women during pregnancy and in newborns because of the immaturity of hepatic cells. The increase in protein levels (hyperproteinemia) may occur in the course of dehydration, when the protein becomes more a relatively small amount of the liquid portion of blood, and inflammatory process in the human body.

2. A nitrogenous base. Characterize the process of disintegration of cells and proteins in the body, resulting in and formed the basis for the grounds (creatinine, urea). Normal levels of creatinine depend on the gender. Women 45 – 95 mmol/l, men – 60 – 125 µmol/L. the Quantity of urea is in the range of 2.5 – 8.2 mmol/L. the Above indicators of biochemical blood analysis changes when violation of the liver and kidneys, as they are formed in liver cells and is excreted by the kidneys. Thus, the increase of nitrogenous bases is observed in various diseases of the kidneys (glomerulonephritis, renal sarcoidosis, renal tuberculosis), poisoning, severe infections and kidney failure. The reason for the decline of these substances can serve as liver failure, starvation, polyuria (excess urine daily value), hypothyroidism (reduction in thyroid hormones).

3. Blood glucose determines the quality of the work of the pancreas and the body’s energy reserves. The norm is defined as 3,3 – 5,5 mmol/l. the result of the analysis depends on carbohydrate metabolism in General. The reducing sugar may occur during prolonged fasting, the violation of the suction capacity of the intestine (enteritis, colitis), with an overdose of insulin and insufficiency of the adrenal cortex. Hyperglycemia (increased blood sugar) may occur in tumors of the pituitary, hypothalamus or adrenal glands, diabetes of any type, long-term treatment with corticosteroids. Physiological hyperglycemia (not related to disease) may be under heavy physical or mental work, stress.

4. Cholesterol – an indicator of lipid metabolism in the body. Normally it ranges between 3.5 to 6.5 mmol/L. cholesterol Increase can occur with diabetes, diseases of the pancreas (pancreatitis), ischemic heart disease (myocardial ischemia), and myocardial infarction. Sometimes cholesterol can increase in pregnant women. Decrease numbers of cholesterol can occur in diabetes mellitus, cirrhosis or liver tumors, and rheumatoid arthritis.

5. Bilirubin – a measure of the amount of pigment produced during the breakdown of hemoglobin in the liver. The amount may be increased in hemolytic anemia, tumors or cirrhosis of the liver with cholestasis (poor bile flow).