Cardiopulmonary insufficiency: what is it?

There is such a thing as «multiple organ failure». This condition is the cause of death of many patients in elderly and senile age. This condition consists of cardiovascular, renal and respiratory failure. Sometimes it happens that acute conditions occur immediately, but in many cases they accumulate over the years. Most often patients suffer from cardio-pulmonary failure.

Do not casually use the term mixed, because the heart, before carrying blood to the organs and tissues, saturates it with oxygen in the lungs. Therefore, the heart and the lungs are considered as a single functional relationship, and under cardiopulmonary failure involve a complex decline in the strength of the myocardium, decrease of respiratory function and increased pressure in the blood vessels of the pulmonary circulation with the manifestation of clinical symptoms.

Pulmonary heart failure can develop suddenly, amid apparent health. The symptoms are growing so fast that pre-hospital mortality is very high. The cause of acute insufficiency are often extensive myocardial infarction and thromboembolism major branches of pulmonary artery.

Manifestations of sudden weakness of the heart or sudden blockage of the pulmonary vessels include the following features: 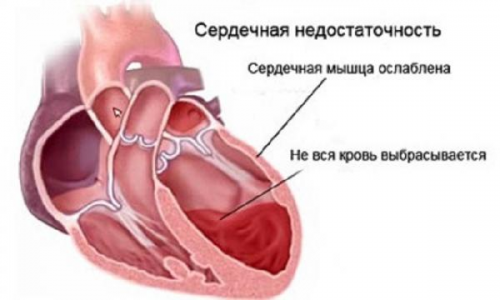 Unlike acute failure, the contractility of the heart during the chronic falls very slowly. Therefore, all of the above symptoms are expressed not sharply, often manifests one sign, for example, shortness of breath on exertion.

An important feature of chronic pulmonary heart disease is increased pressure in the pulmonary circulation, and then in large. The resulting pronounced swelling, primarily on the feet. Symmetrical swelling, doughy consistency, located on the ankles and the back part of the feet. In the early stages of failure they completely disappear at night, as the heart easier to pump blood when the body is in a horizontal position. Then the swelling becomes permanent, swells the liver. In the pulmonary circulation also hypertension occurs, because the incoming blood lingers there. This is due to the weak contractile abilities of the main muscle of the left ventricular myocardium as well as the weaknesses of the left atrium. The result is a cough, which can reach the pulmonary edema or cardiac asthma attack.

Cardiac asthma appears shortness of breath, appear abundant in the lungs moist rales, breath makes it difficult to breath, it becomes bubbling. With the development of pulmonary edema appears pink foam, there is progressive suffocation. One of the oldest methods of treatment of pulmonary edema and cardiac asthma – adoption of a sitting position, putting my legs in a basin of hot water, as well as harnesses laying on hands and feet for a short time. All these activities aim to reduce the influx of venous blood to the heart and to reduce symptoms of cardiac asthma.

In conclusion, we should say about the reasons for the development of chronic cardiopulmonary diseases. Their list is extensive: from the heart is congenital and acquired heart diseases, valvular defects, bacterial endocarditis. From the lungs is a chronic obstructive pulmonary disease, severe pulmonary fibrosis, exudative pleurisy and other conditions. The appearance of such symptoms as shortness of breath with exertion, pain in the heart region, cough and swelling in the legs should immediately contact their physician or cardiologist to clarify the reasons. Because delayed treatment leads to chronic tissue hypoxia, which significantly worsens the prognosis.