To combat the weakness of the heart muscle in medicine often use drugs from the group of cardiac glycosides. However, in addition to the positive effect of these drugs when misused can cause harm to the patient. To avoid this, you need to know the mechanism of action of these remedies, the exact indications and contraindications, as well as the first signs of an overdose.

Cardiac glycosides. What is it?

Are the plants containing drugs, which has long been used as a means to combat the swelling. It was later established that they have an impact on your heart like a whip on a horse that is pushing it. By increasing heart rate and accelerating blood circulation throughout the body decreases swelling. Cardiac glycosides do not belong to innocuous products and are assigned only in extreme cases.

The mechanism of action of cardiac glycosides

This group of drugs has an effect in the form of strengthening of the contractions of the myocardial cells (miocardiotita), as well as slowing heart rate (bradycardia). The latter effect is due to the decrease in the conductivity of the cardiac muscle. With the use of high doses of the drugs in this group is the opposite effect in the form of increased conductivity in the myocardium and tachycardia.

It should be noted that the increase in contraction force does not increase power consumption. That is, to implement a stronger reduction under the action of cardiac glycosides requires the same amount of energy as to reduce the without their influence. This is because the drugs increase the level of calcium in tissues, which directly affect the activity of the contractions of the myofibrils.

The basis for dividing drugs into groups is based on the duration of the action: 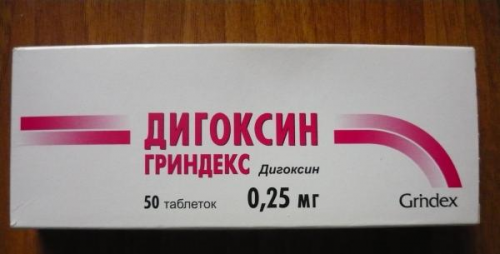 List of drugs (names) from group of cardiac glycosides:

Contraindications to the use of cardiac glycosides:

The first signs of an overdose of drugs cardiac glycosides

Manifestations of intoxication with these drugs on the part of the heart muscle rhythm disorders and conduction (ventricular fibrillation, the appearance of extrasystoles, blockade). These manifestations are clearly visible on the ECG, therefore it is recommended to control the intake of cardiac glycosides by means of electrocardiography. In addition, the patient may be nausea, vomiting, rejection of food (anorexia), abdominal pain and violations of the chair in the form of diarrhea. Sometimes there is headache, insomnia, decreased visual acuity. With prolonged use you may experience allergies and reduce the number of platelets (thrombocytopenia).

READ  Rosacea: what it is, causes, symptoms, treatment at home, photos