Pregnancy is considered a «special» period in a woman’s life. The dangers that await unborn baby enough. These include colds and infectious diseases of the mother, the manifestations of food allergies and poor nutrition, stressful lifestyle. In addition, in these 9 months, you need to stop taking all medications except for essential. Some medical research, for example, x-rays in any form is also prohibited. What can you say about such a study as electrocardiography, or ECG? Is it safe its execution and does not affect whether it is on the development of the baby?

Recall that the heart of man is not only a powerful muscle pump, but the «electric station». It is necessary for coordinated work of the various chambers of the heart and propulsion of large amounts of blood. Therefore, all muscle contraction should be held for «team». If commands are chaotic, then the circulation stops.

This command gives the main pacemaker – predserdno-the sinus node. It is capable of producing weak currents in a certain rhythm and send them to the underlying region of the heart by a special conduction system. Those who are well-versed in computer hardware will know that if the processor can be compared to the brain, the sinus node with the clock generator located on the motherboard.
So our heart is the power generator, the characteristics of which can be very much to learn about his work.

What you can learn on the ECG?

With the help of an EKG can accurately determine heart rate and its deviations from the norm. You can determine where it is blocked and interrupted impulses of the sinoatrial node, before reaching the desired area. Also determine the level of strain on the heart, the degree of development of muscle mass of the myocardium (hypertrophy) and many others. One of the most important and valuable properties of the ECG is a fast and accurate determination of whether the myocardium of the deceased, incapable of reduction in area, and what is its volume. We are talking about the diagnosis of myocardial infarction, which carries the team «ambulance». Moreover, confirmation of infarction with ECG is the basis of the diagnosis of this disease.

Why is ECG safe for all without exception?

Because the ECG is such a rare type of research which does not send the human body no effect, and only registers using the existing electrodes of the electrical signal generated by heart. For example, x-rays, CT and MRI are not possible without radiation, which «is going» after passing through the organs and tissues. Even this safe method research as the blood requires puncture of the skin or even the vascular wall. 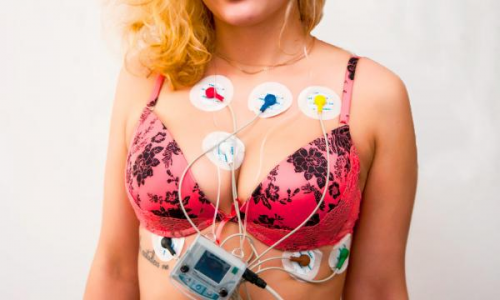 But electrocardiography for your safety comparable to that intake urine test or a portrait artist paints from life. Therefore, an ECG during pregnancy is completely safe. Moreover, it is done even to people who are unconscious in the intensive care unit. And the baby’s heart is already quite took shape in order to be able to research it, spend a «fetal ECG», or cardiotocography. This procedure is also completely safe for the baby.
In order to completely reassure doubters, we can add that electrocardiography is one of the few kinds of study that has no contraindications. Except that the violent insanity of the patient, when you can’t make it lie down quietly for a couple minutes.

Why this procedure is desirable during pregnancy?

In addition to the safety of the electrocardiography and there are some very big benefits from this study in pregnancy. It is clear that the heart of the expectant mother working «for two», ensuring the blood is not only your body, but the body of the baby and the placenta, which also requires power. This increased blood volume gives an additional burden on the heart of pregnant, significant changes in hormone levels that affect the volume of circulating fluid in the body.

To give an example of how the vascular wall may change during pregnancy, it is possible to remember such a breach as trigeminal neuralgia in pregnant women. In this condition high blood pressure «thickens» superior cerebellar artery, which, passing into the cranial cavity, causing compression of the structures of the trigeminal nerve, causing attacks of facial pain. After birth, this condition passes.

This speaks to the increased load on the cardiovascular system in pregnant women. In addition, indications for the test of the heart is the appearance of edema, various pains in the heart area, as well as changes in blood pressure in a pregnant woman. So the answer to the question «is it possible to do» an EKG during pregnancy will not only be in the affirmative, and accepted for binding and repeatedly: at statement on the account in female consultation about pregnancy, and at least once during each trimester.