Every person at least once in my life had a nosebleed. It can be caused by different reasons: trauma to the nasal septum, problems with coagulation (clotting) of blood, hypertension or a jump in blood pressure due to enhanced physical activity, etc.

It is important to note that the nosebleed is not considered an independent disease, has its own etiology, accompanying symptoms, methods of diagnosis and plan of therapy. Most often epistaxis acts as a symptom of a disease, not only the nasal cavity and respiratory system, but also the entire body.

The most common cause of bleeding from the nose acts as a trauma, even minor. For example, a bad childish habit of picking his nose constantly exposes the mucous membrane of the cavity of the small damages. As a result, the shell becomes thinner, and the person faced with the problem of nasal bleeding. In addition, the factor of the development of symptoms can be acute or chronic form of atrophic rhinitis (the so-called common cold, which is not always evidence of an acute respiratory illness). Cause bleeding can tumors inside the nose, both benign and malignant. Among other possible causes are:

Although this symptom is quite common, few people know how to give first aid to the victim. In fact, properly conducted emergency is extremely important, because the wrong actions can only worsen the patient’s condition.

For starters you must correctly put the victim: the person must sit straight, leaning on the back of a chair or sofa, but slightly tilt the torso forward. Put your head back or lean back, to lie down horizontally should not – it can lead to the ingress of liquid into the throat and vomited. In addition, you should not try to vismarkt blood, such actions only reinforce the bleeding. 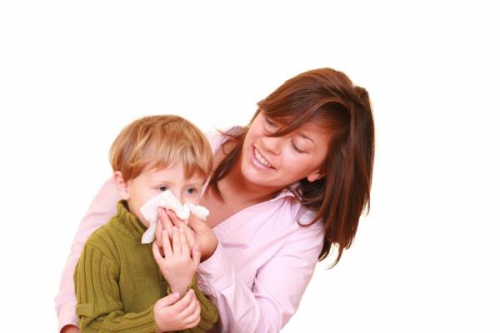 Then you need to quickly identify the possible cause of epistaxis. If you are sure that it is not a particular injury, a fracture of bones or the nasal septum, you can begin to stop the bleeding yourself. Otherwise, if inadvertently grab the sore spot, you can touch a broken bone, which will adversely affect further treatment and recovery of the patient. The wings of the nose are pinching, pressing them to the nasal septum with thumb and forefinger. This patient slightly tilts his head forward and breathing through the mouth. To hold the wings of the nose requires only 3 to 5 minutes.

If you have some simple skills and equipment should resort to the method of plugging the nasal passages. It is held tight with a cotton or gauze tampon, which is pre-moistened with 3% hydrogen peroxide or cool running water. Moistened swab is introduced into the nostrils and again lightly pressed against the wings of the nose to the bulkhead. If possible, you should attach to the nasal septum, the piece of ice or a small cloth (e.g. a handkerchief) moistened with cold water. This method requires more time, it takes 10 – 20 minutes.

An important activity is monitoring the patient’s condition. Most nasal bleeding should be wary of liquids in the nose and vomiting. To prevent this, look in the mouth of the patient or ask him to spit the saliva a couple of times. If the saliva is not stained with blood, and you don’t notice the blood in his mouth on the back wall, so everything is in order. Then carefully remove the swab from the nose, pre-soaking it in water (use a pipette).

If the bleeding caused by serious injuries or a number of pathologies, first aid can not stop the symptom. You need to call an ambulance and not to tempt fate self-medicate.

When exactly should go to the doctor?

Remember that even with a single nosebleed there is a possibility of complications and other problems. So the consultation will not hurt in any way. However, there are several situations in which treatment the doctor is really necessary. These include:

In such cases, the decision on whether outpatient or inpatient treatment takes an ENT (the doctor-otolaryngologist). Most often nosebleeds do not require major interventions, however, it is better to consult with a specialist. Remember that self medication harms your health!

READ  Treatment during exacerbation of hemorrhoids