Hematocrit: what is it?

To determine the proportional composition of the blood composed of cells and liquid, used hematocrit. It is used for the detection and monitoring of diseases that have a negative effect on the erythrocytes.

The hematocrit (Ht) is the percentage of erythrocytes to total blood volume in the blood stream. In the blood this figure is considered to be an integral part of it, along with the hemoglobin, leukocytes and platelets. Because the purpose of erythrocytes is to transport oxygen from the lungs to the tissues of the body, Ht is a measure of the ability of blood to perform its main function.

What is the hematocrit?

The definition of the Ht is often used to detect anemia, especially in combination with the analysis of hemoglobin. Also, this analysis can be used for screening, diagnosis and monitoring of various diseases that violate the proportional composition of the blood. The hematocrit can be used to:

When administered analyzed for hematocrit?

Hematocrit routine is defined in the composition of the blood. The level of hemoglobin and hematocrit levels are often determined by the presence of symptoms and signs of the disease, which affects the number of red blood cells in the blood (e.g., anemia and polycythemia). Symptoms of anemia include:

Some symptoms of polycythemia include:

Determination of hematocrit can be assigned to people with signs of severe dehydration, which include thirst, dry mouth, and a small amount of urine. This analysis can be performed multiple times if the patient has bleeding, anemia or polycythemia, to determine the effectiveness of therapy. Also, it can routine be prescribed to people who carried out the treatment of malignant tumors, since tools can often damage the bone marrow. 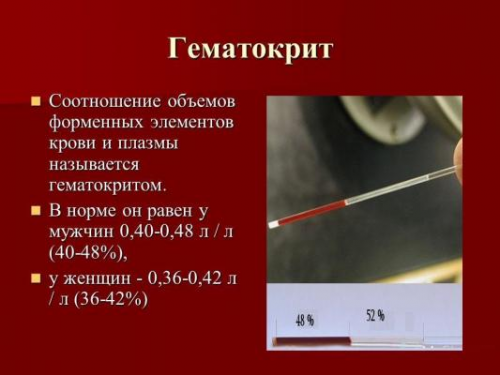 What are the normal hematocrit?

As the hematocrit is part of the General blood analysis, the assessment of its magnitude are taken into account, the number of erythrocytes and reticulocytes and hemoglobin. Also, its magnitude is influenced by age and gender. The normal levels of the Ht:

In some cases the hematocrit lowered?

READ  The vertical position of the EOS: what it means and what is dangerous?

Under what conditions and diseases increased hematocrit?

High hematocrit in combination with increased erythrocyte and hemoglobin is a symptom of polycythemia. Some reasons for the increase in Ht: