Protein – the basis of life on planet Earth. Proteins consist of amino acids, their composition must include nitrogen. Carbon, oxygen, hydrogen, and nitrogen – these elements make up most of the weight of the person. Nitrogen metabolism in the body is constantly. The end products of nitrogen metabolism, excreted in the urine, are low-molecular nitrogenous substances: urea, creatinine and uric acid. As it is formed and why it raised uric acid in the blood?

It is known that uric acid is not formed from proteins and other nitrogen-containing compounds. Nucleic acids (DNA and RNA), which carry genetic information about the cell are the cell nucleus. MRNA are found in the cytoplasm of the cell «Assembly plants» – ribosomes. Each nucleic acid consists of alternating pairs of pyrimidine (cytosine, thymine, uracil) and purine (adenine, guanine) nitrogenous bases. The result of the collapse of the latter and is uric acid.

Elevated levels of uric acid in the plasma of the blood is called hyperuricemia and its salts that can be deposited with this state, referred to as urate. Represent urate crystals similar to fine salt or sugar. Uric acid is further from the blood is excreted into the urine and excreted from the body. Therefore, there are two biochemical analysis: determination of this compound in plasma and urine.

According to modern concepts, the level of this metabolite of nitrogen metabolism depends on age and gender. So, in children is considered to be the normal 120 – 320 micromol/liter, women – from 150 to 350, and men – from 210 to 430 µmol/L. the fact that the purines that turn into uric acid, are found mainly in muscle and in men it is much more pronounced than in women and especially in children. After reaching 60 years of age the amount of muscle mass in men and women is equalized, and the difference in values disappears.

READ  Hydrocephalus of the brain in children photos

About the causes of hyperuricemia

It is widely believed that the high content of this compound in the blood necessarily says about gout. Yes, it is, and gout ranks first among the possible causes of pathology. But apart from this disease there are other causes of hyperuricemia. Physiological cause: you blame high protein diet. Not only animal proteins (meat, sausage), but plant proteins can be culprits: beans, liver, brains, liver, offal and caviar. In addition, the increased muscle breakdown, in severe infections and severe work can cause an increase in the content of this compound. A pathological increase in the level of this acid in addition to gout, evidence of the following diseases: 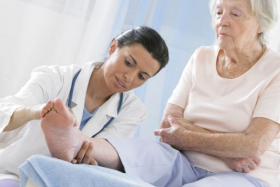 The symptoms of hyperuricemia appear only with long-term and the long-term course of the disease. It is the nephritis, nephropathy and the formation of kidney stones composed of uric acid – urate. Occurring joint damage, which is most noticeable when gout occurs when microcrystalline arthritis. Most commonly affects the base of the big toe. That is where there is a classic gouty attack.

Treatment of hyperuricemia, which is not corrected by diet, conduct special preparations. The most famous and widely used is Allopurinol. He is not able to stop an acute attack of gout, as indicated for prolonged use. But if you combine intake of Allopurinol with diet, the gout attacks will soon recede.