Ischemia of the heart: what is it?

The heart muscle (myocardium) to perform its primary function requires large amounts of energy. Ischemia is insufficient blood flow to the myocardium, leading to oxygen and energy starvation of the cells. Ischemia of the heart is a frequent pathological condition that requires therapeutic correction, as its further development greatly increases the risk of myocardial infarction.

Myocardial ischemia – what is it, mechanism of development

The term «ischemia» is of Latin origin. It refers to a pathological condition characterized by insufficient blood supply to the area of an organ or tissue due to reduced clearance or obstruction of the feeding artery. Accordingly, the ischemia of the heart is insufficient blood circulation in the tissues of the heart (especially in the myocardium) associated with reduction of the lumen of one or more coronary (heart) arteries.

As the heart is in a constant state of functional activity, the cells to execute its operation requires the nutrients and oxygen needed for energy. Therefore, even a small reduction in the power area of the myocardium affects its functional state, leading to disruption of metabolic and energy processes in the cardiac myocytes (myocardial cells). Abrupt cessation of blood supply leads to death of area of heart tissue to heart attack.

The main etiological (causal) factor for cardiac ischemia is the reduction of the lumen of coronary arteries due to atherosclerosis. Atherosclerosis is a systemic metabolic pathology with increasing levels of cholesterol in the blood, leading to his deposition in arterial walls. This leads to the formation of an atherosclerotic plaque with reduction of the lumen of blood vessels and deterioration of blood flow in it.

Such a process often develops in people aged 45 years and leads to a gradual decrease in the intensity of blood flow in the heart. In parallel, typically affects the renal arteries (the main factor in the development of hypertensive disease with the constant increase in blood pressure) and brain (cerebral atherosclerosis). The development of atherosclerosis and subsequent ischemia of the heart are provoked by several factors, which include: 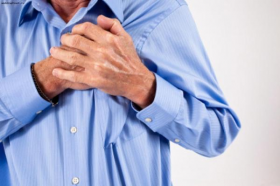 Predisposing factors of atherosclerosis and cardiac ischemia are modifiable. This means that with timely elimination of their effects is possible to reduce the risk of ischemia.

READ  The "bonnet" of the pressure: manual application

Insufficient circulation and nutrition of the heart has the characteristic symptoms which include:

These manifestations ischemia of the heart may gradually increase as the deterioration of blood flow in the tissues of the heart. The basis of diagnostics of this pathological state is performing ECG (electrocardiogram).

How to treat heart disease?

Adequate treatment of circulatory disorders in the tissues of the heart involves complex therapeutic interventions:

An effective fight against heart disease is a healthy lifestyle, this will significantly reduce the likelihood of increasing the level of cholesterol in the blood and its deposition in the blood vessels of the heart.