Stroke – stroke, one of the most difficult and dangerous diseases. If it is necrosis (necrosis) of the brain may be affected as the bodies of neurons (gray matter) and bundles of conductive white matter. While there are well-defined symptoms. The most common is a violation of voluntary movements (Central paralysis), disorders of sensation and autonomic innervation of the organs. But the same disaster can come in several ways: with bleeding and with thrombosis.

No disease that would compare with the stroke amount of money spent for one patient from the onset of illness and until his recovery. Often healing does not occur, and the patient becomes disabled. As a result, public spending continues, only not on treatment, and the maintenance of the patient.

In addition, there is no other disease in which would have been involved as many doctors and other professionals in the treatment of stroke participate Intensivists, emergency physicians, neurologists, neurosurgeons, diagnostic and laboratory services, massage therapists, rehabilitation experts, prosthetists, and many others. Is there a connection between the outcome of the disease, its severity and mechanism of stroke? Yes, there is. What are the strokes on the mechanism of formation? This ischemic and hemorrhagic stroke.

This type of stroke as ischemic stroke occurs due to blockage of a vessel by a blood clot. As a result of stopping of blood circulation creates a zone of necrosis, and around it – a zone of penumbra (ischemic penumbra), considerably exceeding the area of necrosis in size. Depending on the circumstances and immediately begin treatment (effective thrombolysis) with ischemic penumbra may recover their functions, but may finally die, joining the area of necrosis. Ischemic stroke is characterized by the following features:

READ  Cardiomyopathy in children: what is it?

Typically, stroke develops on the background of high blood pressure, which contributes to the separation of thrombus. The clot passes from the large arteries into vessels of smaller caliber. Finally, he gets in one of the arteries, most commonly the middle cerebral artery, forming the clinical symptoms. 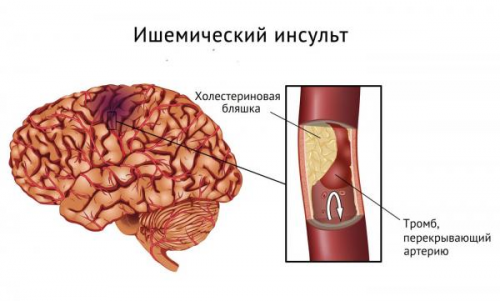 The most common sources of clots are plaques at the bifurcation (division) of the common carotid artery into internal and external, large cholesterol deposits in the aorta and in the ears of the Atria. The last place most insidious because it quietly during the ultrasound examination of the heart, and it can only be seen with transesophageal echocardiography.

The term refers to «bleeding». It is the extravasation of blood into the substance of the brain is a second mechanism leading to necrosis of the nervous tissue and the development of General cerebral and focal neurological symptoms. The mechanism of stroke is the opposite – not a blockage, and breakthrough of blood. The main features, lets talk about hemorrhagic stroke are:

Differences of ischemic stroke from hemorrhagic traced also in the contingent cases: in the case of hemorrhage is the more young and working age. An equal volume of neurological deficit hemorrhagic stroke is more severe ischemic. Hemorrhage is an additional volume of brain tissue and additional pressure. In addition, fresh blood can irritate the substance of the brain, and in the case of a breakthrough in the ventricular system, the possible emergence malignant hyperthermia and gorodnichanka seizures with a high mortality rate within the first day.

In hemorrhagic strokes may need surgery as streamed blood can result in compression (offset) of the median structures of the brain with development of edema and the possibility of death. In severe hemorrhages are sometimes limited to the imposition of rasevych holes, with the removal of a bone flap in order to conduct decompressive trepanation.

What distinguishes hemorrhagic from ischemic stroke by clinical course? Usually ischemic stroke is less of a threat of death, not so quickly develops severe muscle spasticity. In ischemic nature of the stroke the recovery is faster than with hemorrhage, recover better coordination of movements and speech functions. In addition, in ischemic stroke can be performed thrombolytic therapy with excellent result which is the complete regression of any neurological deficit, which is impossible in the treatment of bleeding in the brain.