Lymphadenitis: what is it?

You saw how resolve edema? The human body in addition to circulatory system that penetrates almost all organs and tissues (except the vitreous body, lens and cartilage) requires a special drainage system. Blood consists of formed elements and liquid portion – plasma. Plasma safely pass through the wall of blood capillaries, becoming interstitial fluid. To relieve in the bloodstream of edematous fluid, we need a system of capillaries and ducts, which is called lymph. And lymph nodes – «node protection station» of the system.

In medicine there is such term: «hematogenous and lymphogenous dissemination». This means the spread of something harmful (cancer cells or infectious agents) through the blood stream and lymphatic system. And if the way of pathogens in the blood are white blood cells and the immune system antibodies, in the way of microbes in the lymphatic system up the lymph nodes. If lymph nodes inside the «hard fight», he inflamed. Inflammation of this organ is lymphadenitis. But as is often the lymph nodes are located in groups (in the groin, armpits), then inflamed several. It was this picture, and becomes visible to man.

Conditions in order to show signs of inflammation of a lymph node, most often created due to the influence of the following factors:

From non-infectious causes of lymphadenitis, the most famous are the following:

We must distinguish lymphadenitis and lymphadenopathy. What is it? It is a process of enhancing lymph nodes in which no signs of inflammation in the surrounding tissues. What are those signs?

Like any inflammation, inflammation of the lymph nodes manifested by the following features, which can reach different degrees of severity: 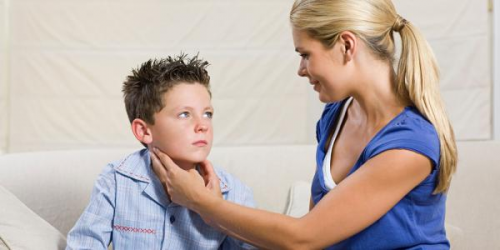 Palpation is an important method of investigation of the lymph node. So, under normal lymphadenitis, the lymph nodes are movable, painless, not soldered to the subcutaneous tissue. If lymphadenopathy of these signs of inflammation, but there are others. For example, the lymphogenous dissemination of metastases in cancer in the lymph nodes, they are enlarged, painless, but the density is not elastic, and rocky. In contrast, lymphadenitis, lymphadenopathy can cause some medications, for example, cytostatics, anticancer drugs and other drugs that affect the immune system.

Confirmation of the diagnosis

When pronounced inflammation when the diagnosis of lymphadenitis is not in doubt, it is necessary to establish its cause. For this purpose the following methods:

It is important that some localizations lymphadenitis need to use special tactics. For example, when you see the «sores» on the penis and the subsequent emergence of the inguinal lymphadenitis, it is almost a 100% probability may be the primary period of syphilis. If inguinal adenopathy is expressed on the one hand, it is necessary to exclude the infringement of inguinal hernia, located unusually low. In childhood lymphadenitis in the neck can be mistaken for allergic angioedema in connection with the similarity of symptoms, and Vice-versa. Therefore, for the diagnosis of lymphadenitis and lymphadenopathy is very important properly collected history, including medicinal.

Threat not as a defeat lymphadenitis lymph node or group of lymph nodes, it is dangerous breakthrough infection further, getting into the blood system. Sometimes a «break» occurs in the literal sense, and the lymph node revealed through a skin fistula. He alone is drained. In some cases, this «spontaneous surgical treatment» leads to a significant improvement and even recovery from scarring. In other cases, the lymphadenitis complicated by the following lesions:

Therefore, when the slightest suspicion of an increase in or discomfort in the lymph nodes need to self-medicate and consult doctor.