Pulmonary heart: what is it?

In medical science, often there are names that are common, but obscure for ordinary people. More often it refers to the syndromic diagnoses. For example, there is the concept of «diabetic foot». But here at least is clear: it looks like the foot in patient with diabetes, which is covered with trophic ulcers. Her nervous sensitivity is reduced due to the toxic action of glucose, which is too much in the blood plasma. And what could mean the term «pulmonary heart»?

Heart and lungs have each person. The term «pulmonary asthma» or «cardiac arrhythmia» all clear: in the first case we are talking about asphyxiation, and the second is the rhythm. Both the first and the second term is the names of diseases. A «pulmonary heart» – what is it? Whether the right to existence of such a strange term? It turns out that has. The fact that the heart and lungs are linked much closer than it may seem at first glance.

Remember that the heart is the pump that provides movement of blood through the circulation. A large circle is used to return arterial blood to organs and tissues and making it in the vein because the blood attaches carbon dioxide by red blood cells highly specialized transport cells. Small circle of blood circulation, so named not because it is less important. He just has a shorter closed length than the vessels of the great circle.

No lesser circulation human life is absolutely impossible, as without a great. In the small circle, the opposite occurs: the blood gives up carbon dioxide and is filled with oxygen, becomes arterial. After that, she re-enters the organs and tissues. The pulmonary circulation within the lungs. Its compact size is the result of a huge total area of the alveoli (vesicles). This circulation consists of the following departments:

By the way, don’t be surprised that in the pulmonary arteries flowing venous blood, and veins – red, saturated with oxygen. The names of the vessels given by the fact that they flows, but by the direction of the flow of blood. Therefore, all the vessels departing from the heart – arteries, and all that carry blood to the heart are the veins. 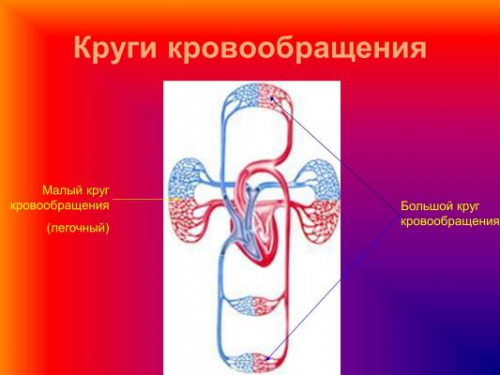 If in the small circle of blood circulation can sometimes be stagnation, edema, or obstruction of blood flow, the heart is forced to «react». The most common causes of obstructed blood flow in the small circle are chronic obstructive pulmonary disease: chronic bronchitis, bronchial asthma, emphysema, polycystic, congenital hypoplasia of the vessels.

To ensure blood flow, the heart begins to pump blood in a small circle with increasing pressure. The result of developing pulmonary hypertension and right ventricular hypertrophy. This will be signs of «pulmonary heart disease», or «cor pulmonale». Its symptoms can occur acutely.

READ  The lipid spectrum of blood: deciphering the

This usually occurs with massive thromboembolism of the pulmonary artery that carries blood to the lungs. Blockage of a major vessel leads to a sharp dyspnea, cyanosis, severe pain in the chest and suffocation. In the case that struck the main trunk of the artery, then a few minutes later, edema of the lungs, and a man dies with symptoms of acute respiratory failure, asphyxiation and virtually complete stop of blood circulation. If acute pulmonary heart was developed as a result of occlusion of smaller branches of the pulmonary artery, there is pulmonary infarction with cardiac arrest and respiration in this area. Often the temperature rises, there is a compensatory shortness of breath, the increased heart rhythm.

Pulmonary heart is the modern problem of cardiology and therapy № 2 after acute myocardial infarction and hypertensive disease, and cerebrovascular diseases which are the leading cause of death in the modern human society. Therefore, early detection and treatment of lung diseases can significantly simplify this problem, reducing the risk of developing this syndrome as «pulmonary heart», or «cor pulmonale».