Vascular encephalopathy of the brain: what it is, treatment

The term «encephalopathy» means a brain disease noninflammatory nature. This pathology klassificeret into different types depending on the etiology of the development. This article describes about vascular (dyscirculatory) encephalopathy, specify what it is and why it develops, and also describes its main clinical manifestations and principles of treatment.

The etiology of vascular encephalopathy

The basis for the development of the specified disease is cerebral ischemia, which occurs as a result of various vascular pathologies. Almost 60% of cases it is caused by atherosclerosis of cerebral vessels. On the 2nd place among the etiological factors is arterial hypertension. It most commonly occurs in hypertension and chronic kidney conditions (for example, polycystic disease or glomerulonephritis).

Because 30% of blood circulation in the brain respond to vertebral artery, the presence of certain congenital malformations of the vessels, their defeat on the background of osteochondrosis or trauma leads to the development of the so-called vertebral artery syndrome, which is manifested by signs of encephalopathy. In addition, the etiology should be noted diabetes. On the background of diabetic angiopathy develops with chronic ischemia of brain tissue, systemic vasculitis, and hereditary vascular lesion, head trauma, hypotension.

Encephalopathy of vascular origin leads to a deterioration of blood circulation in the brain. This is accompanied by hypoxia and impaired trophic, which ultimately causes the death of nerve cells. The most sensitive to chronic ischemia are the subcortical structures and white matter. First, vascular encephalopathy manifested only functional disorders, which, if correct therapy are reversible. In the absence of treatment there are persistent neurological defects.

Onset of the disease almost imperceptible. The initial stage of vascular dystonia, typically characterized by disturbances in the emotional sphere. In 65% of cases is depression. In addition, there are complaints of somatic character. So, patients report headaches, pain in the back, joints, around organs, making it difficult to diagnose. The hallmark of depression is that they arise under the influence of minor traumatic factor or its effect. Psychotherapy or a course of antidepressants it does not give positive results.

With the course of the disease patients become emotionally labile. They have mood changes dramatically, there is excessive anxiety or even aggression towards others. Also, there are complaints that resemble neurasthenia. This sleep disturbance, fatigue and confusion, headaches.

Such complaints are often combined with cognitive impairment. These include memory loss, inability to concentrate or to remember the received information, a low speed of thought and quick fatigue of mental activity. In addition, the recorded movement disorders, which include dizziness and unstable gait. Sometimes walking provokes nausea and even vomiting. 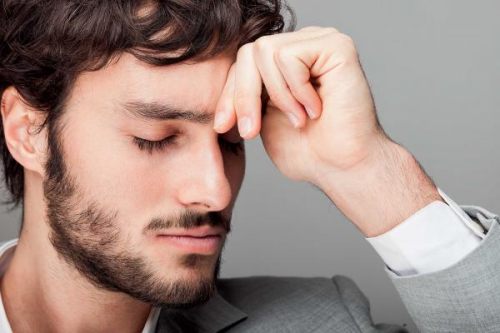 When subcompensated stage of the disease, cognitive and motor impairment worsens, reduced intelligence. Patients can not adequately assess their condition, are not oriented in space. From changes in the emotional sphere, it should be noted pervasive apathy and lack of motivation for any activity.

Patients gradually formed a specific gait (a so-called «gait of the skier»). They move slowly, small steps, during the movement of the foot is completely lifted from the floor, so the walk is accompanied by the peculiar shuffling. It is important to note that patients is quite difficult to move forward or to stop. Such displays resemble Parkinson’s disease, so sometimes such symptoms are called «vascular Parkinson’s».

READ  Hydrocephalus: what it is, causes, photos

Vascular encephalopathy of the brain in the stage of decompensation manifested by speech, decreased swallowing reflex, there is tremor of the limbs and discoordination. Also reduced vision and going deaf, which complicates the adaptation of patients to the environment. Brain tissue actively destroyed. While there are seizures. Formed dementia (acquired dementia).

Therapy is carried out taking into account the etiology of brain lesions, as well as prescribe medicines that improve microcirculation and cerebral blood flow, protect the nerve cells from ischemia and lack of oxygen. Necessarily treat the underlying disease, which led to vascular encephalopathy. So, if there is atherosclerotic disease of cerebral vessels, appoint a special lipid-lowering medications and medications that reduce cholesterol (for example, Lipemic, Essenziale, Klofibrat). In the presence of diabetes definitely control blood glucose and if necessary, prescribe hypoglycemic drugs. If the cause of the lesions is hypertension, prescribed antihypertensive drugs.

If encephalopathy is accompanied by insufficient venous outflow, apply Troxevasin or Naphazoline. Angioprotectors are often used to strengthen the blood vessels. To improve the microcirculation is recommended to take Aspirin or Chimes. Also to improve blood flow and prevent spasm of blood vessels prescribed Nospanum or Cinnarizine.

In the complex treatment include vitamins and medications with neuroprotective properties, which improve the functioning of neurons in conditions of constant lack of oxygen. As a rule, are appointed by the pyrrolidone derivatives (Piracetam), GABA derivatives (for example, Aminalon), stabilizing means (Cereton) and medicines of animal origin (e.g., Actovegin or Cerebrolysin).

With proper treatment you can slow down the progression of even compensated vascular encephalopathy.