Vascular stenting: what is it?

Vascular stenting is a minimally invasive surgery, which doctors restore patency of the vessel and improve the blood circulation suffering from ischemic tissues. Most often, stenting is performed on the coronary and carotid arteries, rarely this method is used to treat circulatory disorders in the lower extremities and kidneys.

Stenting: what is it?

Stenting is a procedure in which a narrowed blood vessel inserted a stent (a hollow tube, made of high quality metal or polymeric material), allowing blood to circulate normally. Stents according to their form and structure are of several types:

In addition, there are stents with a special drug coating or without it.
To install the stent is not required to open his chest or carry out other major surgery. The stent is introduced into the diseased artery with the help of special conductors through the large vessels under the control of the radiological equipment. For example, stenting of the heart vessels is performed through the femoral artery. Pain relief do apply local (anaesthetic obkalyvanie tissues at the site of incision of the skin over the femoral artery).

The use of minimally invasive techniques stenting can significantly reduce the time patients stay in hospital (one day before surgery and several days after) and significantly reduce the likelihood of developing postoperative complications (bleeding, wound infections, etc.). However, stenting also has its disadvantages. At the place of production of a stent can cause clots, so all patients after surgery prescribe special drugs that reduce the risk of thrombosis.

READ  Diet in atherosclerosis: rules and sample menu for the day

The main indication for stenting of the coronary arteries – coronary heart disease (CHD). Its main cause is atherosclerosis, a leading clinical manifestations repeated attacks of angina and myocardial infarction. Pain that occurs during an attack of angina, is caused by oxygen starvation of the heart muscle caused by a blockage of one or more coronary arteries. When the patency of these vessels is reduced to a critical value, any stress or physical exertion can result in the development of acute myocardial infarction. 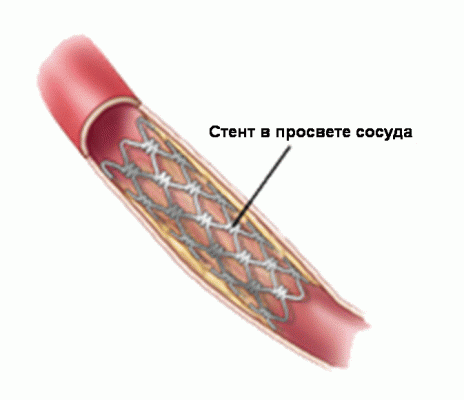 Effectively restore coronary circulation with only the help of medicines is impossible. Nitroglycerin and other similar drugs act purely symptomatically temporarily expand the vessel and reduce the pain. Also atherosclerotic plaques, which themselves act in the lumen of the vessel, and even contribute to the formation of blood clots, medications can’t be resolved. Therefore, when CHD coronary stenting is the best treatment option, allowing minimal trauma to the patient is fully back in all plans of life.

In addition to heart operations, the technique of stenting of vessels is widely used on other vessels:

The main contraindication for stenting are purely technical in nature:

In addition, a contraindication can be critically serious condition of the patient.

An integral part of the treatment of vascular diseases by a method of stenting is rehabilitation. It includes several areas: preventative medication, diet therapy and exercise therapy.
Objectives of drug therapy: reduce blood viscosity, prevent blood clots, reduce «bad» cholesterol and thus halt the progression of atherosclerosis – the main enemy of vessels. When heart disease, in addition, appoint a special cardiological tools that normalize blood pressure and strengthen the heart muscle.

Objectives of diet therapy: to normalize lipid metabolism, reduce the weight of the patient (if necessary) and regulate blood pressure. Diet plays a big role in the fight against atherosclerosis, so patients undergoing stenting, to adhere to certain rules in the diet doctors recommend after a period of rehabilitation.

Tasks physical therapy: gradually to prepare the body and heart to new loads, improve the physical condition of the patient and again to normalize its weight.
Disability after undergoing surgery stenting is not necessary, because the ability to work as a result of this surgical intervention is not reduced, but rather improved.