What is right ventricular hypertrophy?

In the study of the heart doctors of the functional and ultrasound diagnostics, as well as internists and cardiologists often have to deal with this physiological state called «right ventricular hypertrophy». Is it good or bad?

The concept of «hypertrophy» – what is it? That word is «teams» a Greek term that means «excessive eating». For example, all greatly hypertrophied muscles of weight lifters and bodybuilders, while they deliberately do it. Is hypertrophy of the cardiac muscle is a symptom of the disease? Because the heart becomes stronger, it is able to deliver more oxygen to tissues and muscles, you become more hardy, perhaps he is able to stay longer under water without air? Actually it is not so. In order to understand this, remember the school curriculum.

A bit of physiology

It is known that the human heart four-chamber: it consists of two Atria and two ventricles. A cavity isolated from each other. The heart is a muscular pump, which operates in a certain sequence, due to the cardiac conducting system and myocardium contraction. Work cycle looks like this:

Many of them wonder: why is the pulmonary artery called an artery, while it’s flowing venous blood, and conversely, the pulmonary veins are called veins, but contain bright red arterial blood? The answer is very simple: the item is not the color and composition of blood, and the nature of the location of vessels: all the vessels flowing to the Atria are veins, all arising from the ventricles are arteries.

We were told to have a clear understanding that the heart muscle is not working as one unit: the left ventricle delivers oxygen supply to the entire body, while the right sends blood to the lungs. 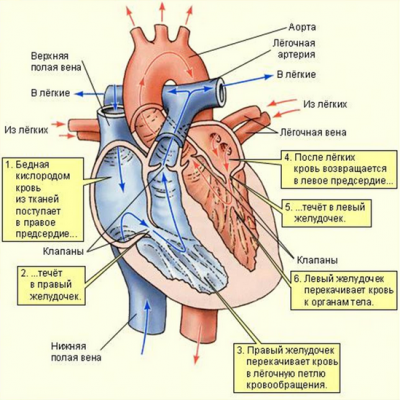 Hypertrophy of the right ventricle of the heart, like any muscle, occurs under increased load. It turns out that the load occurs when the ventricle is hard to pump blood into the lungs, in other words, in the system of the pulmonary artery there is increased pressure. Each of us knows: the more pumped up a Bicycle wheel, the harder it is given the next move. The mechanism is the same. Therefore, the problem of the right ventricle is associated with hypertension of the pulmonary circulation (pulmonary hypertension). Its main causes:

READ  Tingling in the region of the heart: causes

Best known for more than a hundred different causes hypertrophy of the right ventricle.

It is known that almost always this state evolves for a long time – sometimes for several years without causing any problems. But in the case when compensatory mechanisms are exhausted, the following picture develops:

It is important to remember that this is not a «symptom of hypertrophy of the ventricle». Hypertrophy is a compensatory mechanism, and the symptoms relate to pulmonary hypertension or to a developed condition, which is referred to as «cor pulmonale» («pulmonary heart»).

Modern medicine has many methods that allow you to «raise the alarm» at the very early stage of identifying hypertrophy. To do this, use ECG and then an ultrasound of the heart. It is important that ultrasound cannot assess the hypertrophy is not only the right but also the left ventricle (it is an important sign of hypertension), the condition of the large vessels of the valve apparatus.

An invaluable aid in the diagnosis during the ultrasound examination of the heart provides the possibility of observation of blood flow through the vessels in «real time», the degree of regurgitation (turbulence) of the flow of blood and other important data. If the ECG and ultrasound is not enough, you can perform cardiac MRI with contrast, angiography, which shows all the coronary vessels that feed blood right and left ventricles, and blood flow.