Retinoic ointment is the drug, which previously was widely used in the treatment of pimples, blackheads, and wrinkles, but with the development of modern cosmetology on it undeservedly forgotten. Assortment of pharmacies is so great that many experts long have not used this tool, despite the fact that its main component has long been used in the composition of the expensive and popular cosmetic products against wrinkles. The main component of the drug exerts anti-inflammatory properties, detrimental effect on acne and seborrhea, which is why the applied ointment retinoic acne.

According to scientific data, vitamin a is essential for the health and beauty of skin. Retinoic ointment belongs to the group of retinoids, which includes different forms of vitamin A. the lack of retinol directly affects the condition of the skin in the form of hyperkeratosis, which leads to acne and pimples on the face. Retinoids are part of many creams, ointments and other products for the beauty industry. These substances may be formed naturally in the body in the recycling of retinol, but in small quantities, so often they are synthetic means.

Isotretinoin is included in the ointment composition affect the structure of the epithelium, promotes more rapid excretion of sebum. Decreasing the activity of sebaceous glands, and acne becomes less due to the fact that bacteria have nowhere to breed. Plugs in the pores that cause blackheads on the face, dissolve under the action of the drugs in this group.

Retinoids improve skin regeneration, because used in the fight against wrinkles. Seborrhea and anti-inflammatory property allows you to apply the remedy based on retinoic acid are not only in cosmetics but also libido skin diseases. For a positive result in most cases will require long-term treatment because isotretinoin cumulative effect.

Dermatologists around the world have noted that after treatment with preparations of retinoids not only disappear black spots and pimples, but the small wrinkles, the skin becomes more elastic, fresh, fade pigmentation spots.

For full recovery will need a rate from one more months. Usually the drug is applied two times a day. Ointment with a greater concentration of the active substance is applied carefully, avoiding contact with mucous membranes, lips, eyes, better at night, not smearing a thick layer. Since retinoic acid increases sensitivity to solar radiation, it is impossible to use in the daytime to avoid the burn.

READ  Stage vitiligo: what are and how to recognize them?

Preparations of retinoids used for internal and external use. Retinoic ointment for external application of release of 0.1% and 0.05%, but for quick effect use a tool with greater concentration. Competent treatment and the right dosage will be prescribed only the doctor, because for sensitive skin, a 0.1% ointment is not suitable and could overdry it. The choice of tools is affected by the stage of the disease and the number of pimples on the face. Funds with isotretinoin for outdoor use most commonly used for mild and moderate stage of acne.

Preparations for internal use also only appoint a specialist after a thorough diagnosis, because there are frequent cases of overdose of vitamin A with self-treatment. For severe stages of acne, when acne vulgaris and cystic acne, it is advisable to take a group of retinoids inside. In this way, treat oral lichen planus, red erythematosus, mycosis and ichthyosis due to a wide spectrum of action of retinoic acid.

That you treat this tool?

Ointment isotretinoin is most often used to eliminate black spots and pimples on the face. Various processes infectious nature is also treatable. In addition to skin disease retinoic ointment has been used successfully in women anti wrinkle. The skin is smoothed under the influence of drugs group of retinoids, turgor increases, therefore, different forms of vitamin A are widely used in modern cosmetology.

The composition of retinoic ointment

Part medications include retinoic acid or isotretinoin, which is similar in structure to vitamin a (retinol). Among other components, the vaseline is to soften the skin, glycerin that has a moisturizing effect, dibunol wax to retard moisture and alcohol for antiseptic effect. This composition helps not only to remove skin rashes, but also enhance the cell regeneration and regulate sebum production. 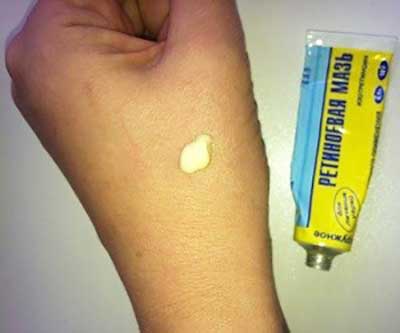 Ointment supplied in an aluminum tube with different concentrations and ground. There is a package of 10 and 35 grams per tube.

READ  Cryotherapy of warts: a review of the popular method of treatment

The use of acne

The ointment is best to use after consultation with a doctor, who will determine the cause of the disease and prescribe a treatment plan. Usually the drug is applied on clean skin several times a day. Isotretinoin change for the better the structure of epithelial cells and sebum out of the pores much faster. Because of these properties changes the fat content and the decrease in the amount of sebum it becomes less opportunity for bacteria.

Isotretinoin a potent substance, so you need to strictly adhere to the instructions.

In addition, the skin should be clean before the daily procedures, it should dry within 20 minutes after cleansing or use a hair dryer to it lacked moisture. With the simultaneous adoption of tools with antibiotics need to be careful and consult a doctor.

It is often the wrong treatment and the violation of the required conditions for maximum action of this drug does not work.

After the first week of applying the ointment may occur during exacerbations, when the skin appear new inflammation, swelling or peeling. A full recovery will take months, so you need to explain to the patient that such a period is inevitable and cannot be completely stop taking the drug. It is possible for a few days to stop taking the drug, and even better to consult a dermatologist who will make an inspection and advise on the correct method of application according to skin type and stage of the disease. Severe itching during use of the drug is likely to mean individual sensitivity to the active substance of the ointment.

READ  How is herpes: the most common ways

The beneficial properties of the ointments allow you to use the product for the following purposes: 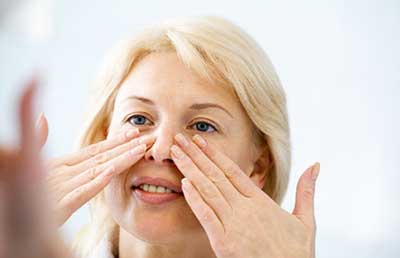 Contraindications of the drug

Buying retinoic ointment for acne, do not forget that it is quite a powerful tool and it has its strict contraindications:

If a person has an allergic reaction to preparations of retinoids, it is manifested by itching, swelling of mucous membranes, redness of the skin and small rashes. Dangerous uncontrolled and prolonged use of retinoic ointment, which can result in inflammation of the conjunctiva, painful sensations in the joints and muscles, severe cramps. An excess of retinol will lead to disease of the stomach or intestines, so the drug is used in courses with mandatory breaks.

The cost retinoic ointment compared with other modern remedies against acne and wrinkles is available for most buyers. The price is for one package ranges from 250 to 400 rubles.

Retinoic ointment can restore skin health and cleanliness, with proper use and compliance with instructions. Preparations of retinoids successfully