Classification of degrees of Barrett’s esophagus

The stage and extent of disease development depends not only on the frequency of observation during the year in a medical facility, but the treatment of the disease. Even virtually incurable and little-known science disease processes, scientists are trying to break into the options to make it easier to work with them.

Is there any classification of Barrett’s esophagus or disease is only one of the initial stages of development? Yes, there are several classifications that have been developed taking into account the location, distribution and structure of the process.

Code of Barret’s esophagus in ICD-10

Since the mid-twenties of XX century in the study of esophagus with esophagoscopy some suffer from heartburn patients were found changes of the mucous membrane of the body. Instead of layered neorogovevayuschy epithelium were areas of gastric or intestinal epithelial layer. This condition became known as Barrett esophagus. This process in 0,2—0,8% of the cases goes into a malignant neoplasm. That is why doctors him paying close attention.

When the painful process was discovered was the issue of his identity. But still there is debate to what class of diseases it should be attributed. The main source used in the practice of physicians all over the world — ICD-10. This is a book of medical diagnoses developed by the world health organization, to facilitate the work of physicians. The last revision was in 2007.

According to the ICD-10 Barrett’s esophagus refers to the XI class under the title «Diseases of the digestive organs.» Diagnosis code To 22.7. It was a few years ago, as Barrett’s esophagus always considered a complication of gastroesophageal reflux disease. In some reference sources and works to meet the line of the disease — 13.0 D. This unit includes benign processes, because the doctors consider the disease as a precancerous disease. The debate so far, but maybe the ICD 11th revision will solve this issue.

READ  Treatment of GERD the basic principles, events and methods

Stages and options for Barrett’s Esophagus

To determine these parameters apply only one method of research — fibrogastroduodenoscopy with biopsy (this is when you take to study a piece of tissue). So it is possible to detect the type of the process. 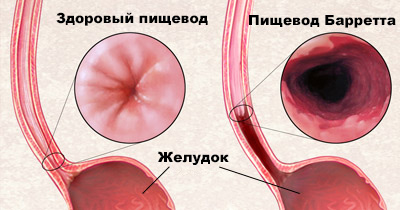 When replacing the epithelial layer of the esophagus, can meet several of the following options.

As already mentioned, in the process of development of the disease is the substitution of one kind of epithelium to another, intestinal. This phenomenon is called metaplasia (complete change of fabric). If the process is running, but the cells are still not fully changed — this dysplasia. In accordance with these changes Barrett’s esophagus is divided into stages or degrees of the disease:

The Prague classification of Barrett’s esophagus 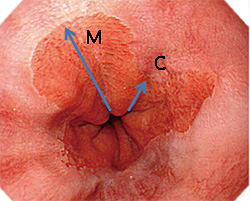 Under the previous options considered the extent of replacement of normal epithelial cells to atypical, the type of cells that were discovered in the investigation and the identity of the disease to a certain type of processes. But in 2004 scientists suggested several criteria were developed by the Prague classification of Barrett’s esophagus or s&M classification. It is based on the prevalence of the substituted tissue, expressed in inches. In diagnosis, enter C and M parameters.

C is the distance or length of the circular segment of metaplasia.

M is the distance of the longest «asymptopia» segment of the substituted tissue.

The Prague criteria for Barrett’s esophagus do not include pockets or areas of metaplasia, but only the length of the large segments.

Unfortunately, today there is no fully comprehensive classification of the disease, it has not yet been developed. This is due to the fact that the disease was discovered relatively recently and no one was able to make all the necessary important criteria. But since Barrett’s esophagus is a common complication of GERD and is detected at least in 10% of cases the classification will eventually be revised and supplemented.