Like many other diseases of the digestive system — GERD, a chronic process in which there are periods of exacerbation and remission. Complying with all recommendations of doctors and worrying about their health can go for long without medical treatment.

But in the opposite situation, without adequate attention to existing disease, there is a chance of getting complications of GERD. Each of which, with an unpredictable and frightening consequences.

When there are complications of GERD

In some cases, develop complications?

Complications are not specific in this disease, they occur in other problems of the gastrointestinal tract (as with gastric ulcer and duodenal ulcer, gastritis, heartburn isolated).

The most common adverse complications of GERD:

Each of these processes leads to a sharp deterioration in health, reduced quality of life and often surgical treatment. Therefore it is necessary to examine in more detail these diseases.

Ulcers of the esophagus

According to statistics such GERD complications develop in 2-7% of cases. The sores causes constant exposure to gastric contents on the delicate mucosa of the esophagus. This produces a defect not only mucosal, but also the muscle membrane. Approximately 15% of cases possible perforation of the wall (the gap) with the release of the contents of the digestive system in the middle part of the chest (mediastinum). 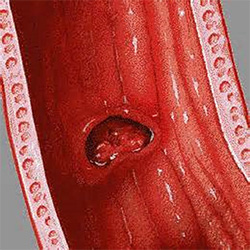 ulcers of the esophagus

What symptoms appear with this complication?

For the diagnosis should undergo a series of examinations, the principal of which is EGD (fibrogastroduodenoscopy) and radiography.

Ulcers tissue can be of different sizes, single and multiple. Most often they are in the lower third of the esophagus (just on the border bodies).

When single elements of treatment can confine conservative therapy, but under the supervision of doctors, so these patients are often sent to the hospital.

Stricture of the esophagus

Every complication often follows from the previous one. So the stricture, is a narrowing of the esophagus as a result of replacement of the mucosa and the muscle tissue with scar tissue. There is a physiological replacement shells on the other, as a result of frequent inflammation or after the appearance of ulcers, which heal on their own. The incidence of strictures after complications of GERD, in the range of 10-11% of cases. 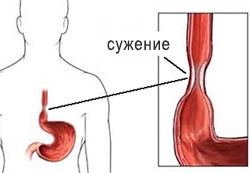 Clinical manifestations such unpleasant complications depend on the degree of narrowing of the esophagus. The most common symptoms, following.

Diagnosis is exposed only after the EGD and x-ray examination of the esophagus.

Bleeding can occur in the presence of ulcers of the esophagus and cicatricial contractions. In the first case, the defects in the tissue so deep that the wound, and laid bare the vessels of authority, the bleeding occurs. In the second case, scar tissue is not as flexible and pliable as epithelial. When you swallow food, it is often subjected to tearing, this also manifested blood in the lumen of the esophagus. 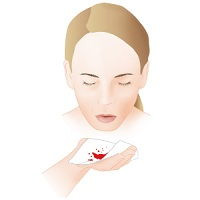 The symptoms are the following:

This complication is an indication for immediate hospitalization. Small defects can be treated with drugs.

One of the complications of GERD is post-hemorrhagic anemia. The reduction of red blood cells in the overall analysis after the regular bleeding.

Of these the complications of GERD, is the most unpredictable and therefore is considered the most dangerous. Approximately 2-3 cm above the place of transition of the esophagus into the stomach is the substitution of stratified epithelium on cylindrical. Barrett’s esophagus is considered a precancerous process, so it is necessary to closely, passing annual the full study.

Clinically, such a process may in any way special not appear. For this disease is characterized by some signs of GERD:

In the initial stages the treatment is conducted on the General principles of treatment of gastroesophageal reflux disease. With the rapid progressive replacement of cells on abnormal, it is recommended to resort to surgical correction.

The extreme manifestation of any disease is a complication. More often they arise, if not to look after themselves and hope for a magical recovery. Annual checkups will help to prevent such undesirable consequences.