The classification of GERD severity of the disease

In therapy, a lot depends on the stages of the disease. This information affects the duration of treatment and the choice of certain drugs. In the case of the GERD in the first place matter how deeply affected esophageal mucosa. In medicine most used classification of gastroesophageal reflux disease which can be detected by this method of study as EGD (fibrogastroduodenoscopy).

What are the symptoms will bother humans at every stage of the disease? Now have to respond not only to this question. There are several classifications of GERD, consider the most common of them.

Classification of GERD was done according to ICD-10

The simplest classification is spelled out in one of the classic medical books called ICD-10 (international classification of diseases, tenth revision). Here is a clinical variant of division of GERD following.

The endoscopic classification was proposed in the late 80-ies of Savary and Miller, and is widely used nowadays.

It has long been known that the mechanism of development GERD is a dysfunction of nippising sphincter (the muscle located on the border between the esophagus and the stomach, limiting the reverse movement of food). When this muscle is weakened, there is a reflux of gastric contents, including hydrochloric acid, into the esophagus. And over time, almost all of his sheath undergo changes. So they formed the basis for this classification. 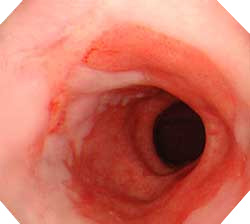 lesions of the esophagus

In detail it can be summarized as follows.

Some authors of the last two stages combined into one.

In my practice, gastroenterologists often use the endoscopic classification to define the stages in the development of GERD. Her more often resorted therapists, considering it more simple to understand and comprehensive. But this is not the only division of GERD.

The Los Angeles classification of GERD

At the end of the 20th century at the European week of gastroenterology suggested to use the degree of prevalence of lesions. So there was the Los Angeles classification of GERD. Here’s what it involves. 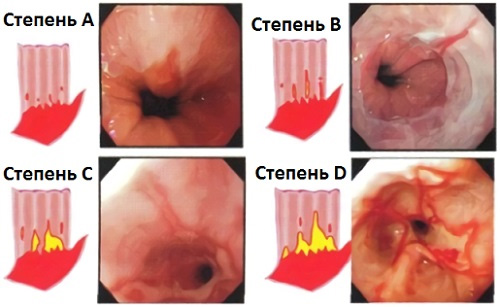 According to the Los Angeles classification complications such as ulcers and constrictions may be present on any of the above stages.

Units at the stage of development of the disease was created to simplify the work of doctors. Through the classifications, it becomes easier to understand the manifestation process and to find better methods of treatment. To establish at what stage of the disease is a every people suffering from GERD, can be a doctor. Therefore, at the first sign of illness, speed recovery, contact the experts.