Peptic ulcer of the esophagus

Pain in the chest — one of the most common symptoms of coronary heart disease. Annually from this disease in the world die more than 25% of people. But few people know that painful feeling in the chest are for diseases of the esophagus. The symptoms are very similar, and the treatment time lasts much less and often does not require an emergency response.

Such processes are a peptic ulcer of the esophagus. This is a disease that is easily treatable when you remove the main causes of its appearance! And correctly picked up therapy will help to avoid unpleasant complications.

What is a peptic ulcer and causes of its occurrence

A peptic ulcer is a deep lesion of the mucous membrane of the esophagus as a result of acute or chronic exposure to chemical factors. These include:

Disease of the digestive system accompanied by increased secretion of hydrochloric acid. These include primarily the GERD. This is the most common cause of chronic peptic ulcers. Gastroesophageal reflux disease is accompanied by not only the abundance of hydrochloric acid, when it still disrupted lower esophageal sphincter (the muscle located on the border of the esophagus and stomach, which normally closes when the flow in the gastrointestinal tract of food). Due to the weakening of this muscles round the hydrochloric acid falls in the upper digestive tract — in the esophagus. Constant exposure to hydrochloric acid on the mucous membranes causes burns. First appear erosion — surface defects. Then, if the acid continues to penetrate the esophagus, the formation of deeper tissue changes.

Ulcerative process affects the lower third of the body, in rare cases, ulcers appear at a higher level, what happens in case of poisoning and the use of strong chemicals. It can be single or multiple mucosal defects.

Symptoms of ulcers of the esophagus and diagnosis

All manifestations ulcers of the esophagus depend on the causes of the disease. If the process is reflux disease — the emergence of the main problems is preceded by heartburn, which increases after meals and in violation of the diet. Thus, the esophagus signals the uncomfortable conditions to the detriment of his work. Normal pH of the esophagus is alkaline, the hydrochloric acid of the stomach destroys the natural protective barrier of the body. So when a long exposure is formed ulcers.

What are the symptoms of ulcer of the esophagus? 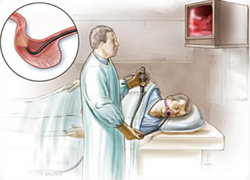 There are silent forms of ulcer of the esophagus, symptoms are lacking. Only occasionally person concerned heartburn when bending of the torso and in the supine position (in points of contact of gastric contents into the esophagus). The disease often lies behind the manifestations of other disease processes. When it come first symptoms of other illnesses.

READ  GERD and alcohol — can we drink during treatment

Ulcer of the esophagus is difficult to diagnose because of similar clinical symptoms with other painful processes. As already mentioned, a pain reminiscent of the defeat of the cardiovascular system, so people often come to the cardiologist. And only having found no disorders of the heart, the physician directs the study of the digestive system. The most informative methods of diagnostics:

Treatment of ulcers of the esophagus

If the earlier treatment of ulcers of the esophagus was performed only in hospitals, at the present time all depends on the size of the lesion. Profound and multiple defects as well as complicated by ulcerative processes are treated in hospital. In other cases, therapy is prescribed on an outpatient basis.

READ  Prokinetics in GERD: a description of the action, indications, application

Sometimes patients with constant chest pain in need of more in-depth study than just electrocardiogram and common tests. The symptoms can be a manifestation of ulcers of the esophagus, and high-quality treatment depends on how quickly the conducted diagnostics. Paying attention to such things as the time of occurrence of the burning pains can be difficult time to make the correct diagnosis, but also to save people from the painful symptoms.