Adenoma of the adrenal gland: symptoms and treatment of tumor

Until recently, adrenal tumors was considered quite rare, and they accounted for less than 1% of all tumors. The situation changed with the introduction in clinical practice of such research methods as ultrasound, CT and magnetic resonance imaging help to visualize the pathology of this organ. It turned out that tumors, in particular, adenoma of the adrenal gland, are common, and according to some they can be found every tenth inhabitant of our planet.

Adenoma – a benign glandular tumor, which can secrete hormones, causing the varied and sometimes severe in the body. Part adenomas does not differ that ability, and therefore are asymptomatic and may be discovered accidentally. Among patients with such pathology more women, whose age ranges between 30 and 60 years.

Benign tumors that are diagnosed in the adrenal glands, can not be called adenomas, pending a thorough examination of the patient. In case of accidental detection of asymptomatic neoplasms occurring, it is recommended to call them incidentalomas, pointing to the surprise of such findings. After the patient is examined, and the malignant nature of the tumor is possible, it will be possible with high probability to judge the presence of the adenoma. 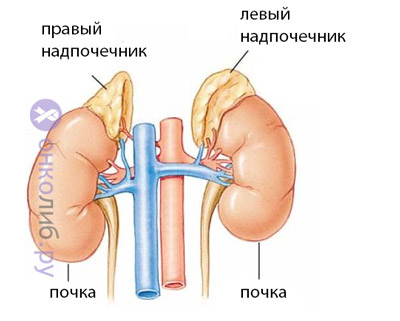 The adrenal glands – small paired endocrine glands, located at upper poles of the kidneys and produce hormones that regulate mineral and electrolyte metabolism, blood pressure, formation of secondary sexual characteristics and fertility function of men and women. The spectrum of action of adrenal hormones is so wide that these small bodies are considered vital.

The cortical layer of the adrenal cortex are three zones that produce different types of hormones. Mineralocorticoids glomerular area responsible for normal water-salt metabolism, maintenance levels of sodium and potassium in the blood; glucocorticoids (cortisol) beam area for proper carbohydrate and fat metabolism, are released into the blood under stress conditions, helping the body time to cope with sudden problems, and is also involved in immune and allergic reactions. Net area of synthesizing sex steroids, provides for the formation of secondary sexual characteristics in adolescents and the maintenance of normal levels of sex hormones throughout life. 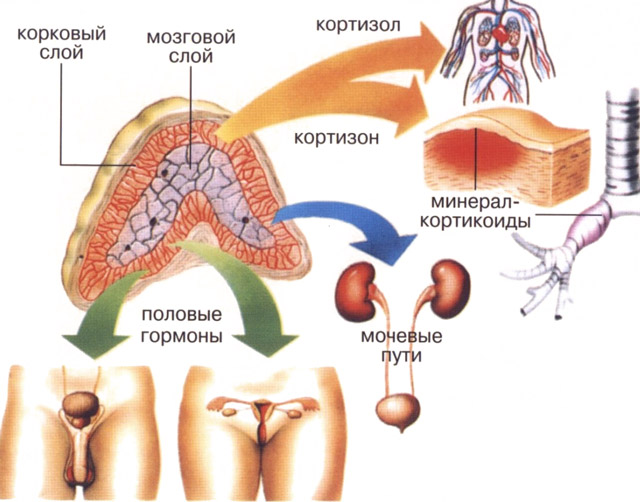 Hormones of the medulla of the adrenal glands – epinephrine, norepinephrine – involved in various metabolic processes, regulate vascular tone, blood sugar levels, and when stress in the blood gets a large number of them to compensate for in a short time a hazardous condition. Tumors of the medulla of the adrenal glands are recorded very rarely and adenomas, and is formed only in the cortical substance.

To determine the malignant potential of the detected tumors, the doctor it is important to set the speed of its growth. So, adenoma increases by a few millimeters during the year, while cancer is rapidly gaining ground, sometimes reaching 10-12 cm in a relatively short period of time. It is considered that every fourth tumor diameter exceeds 4 cm, are malignant in morphological diagnosis.

Causes and types of adenoma of the adrenal gland

The exact causes of benign glandular tumors of the adrenal glands is unknown. It is expected catalytic role of the pituitary synthesis of adrenocorticotropic hormone that increases the release of hormones of the cortical layer, in certain circumstances, require an elevated number of injuries, surgery, stress. 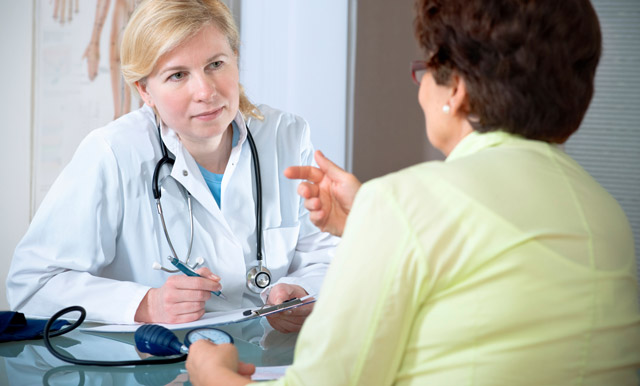 Risk factors can be considered:

As a rule, is unilateral adenoma, although in some cases it can be detected in the left and in the right adrenal gland at the same time. Externally, the tumor has the appearance of a rounded education in a distinct thick capsule, color adenoma tissue yellow or brown, and its structure is homogeneous, indicating the high quality of the process. Adenoma of the left adrenal gland occurs more frequently than the right.

Type of adenoma determined by its hormonal activity and produced during this hormone:

The histological type is determined by the type of cells clear cell, dark-cell types and a mixed variant.

The most frequently diagnosed corticosteroma, secreting glucocorticoids and manifested by a syndrome Itsenko-Kushinga. More rare is considered aldosteronoma and very rare adenomas that produce hormones.

The vast majority of adenomas do not produce any hormones, and because their sizes rarely exceed 3-4 cm, then local signs of compression of the large vessels or nerves does not occur. Such formations are detected accidentally during CT or MRI about the pathology of the abdominal organs.

The number of cases the diagnosis of these tumors has increased significantly, but the idea of their removal, each patient is more than unreasonable and irrational. In addition, the benefits of removal of asymptomatic occurring very slowly growing tumor is questionable, since the surgery is quite traumatic and it can cause more problems than the carriage of the adenoma.

Inactive functional relationship of the tumor can occur as a consequence of a pathology of other organs – diabetes, hypertension, obesity, requiring enhanced adrenal gland function.

Korticosteroma – the most common type of adenoma cortical layer of the adrenal gland, which secretes into the blood excessive amounts of cortisol. The tumor often affects young women. The symptoms are reduced to the so-called cushingoid syndrome:

In addition to these signs, patients may be noted depressed mood, and fatigue, up to severe depression, lethargy, confusion. Diabetes accompanies this pathology in 10-20% of cases, and jumps in blood pressure bother almost all patients. Hypertension can carry a malignant character, the figures of pressure in the moment of crisis is quite high, so the risk of stroke in this moment is especially great. Over time in the pathological process involved and the kidneys.

In women unpleasant symptoms in the form of obesity and striae hirsutism often complemented by the appearance of hair where it normally grows in males (ears, nose, upper lip, chest). Frequent violations of the menstrual cycle and infertility, reflecting a severe hormonal imbalance.

Aldosteronoma is considered more rare type of adenoma of the adrenal cortex. It secretes aldosterone, contributing to the delay in the body of sodium and water. This condition leads to increased blood volume, increased cardiac output and hypertension, which can be considered as a major symptom of the tumor. The decrease in the concentration of potassium in aldosterone causes cramping, muscle weakness, arrhythmia.

Adenomas, are able to synthesize sex hormones, are rare, but the symptoms of their quite distinctive and noticeable, if the tumor secretes hormones of the opposite sex than its owner. So, Androsterone that produce male sex hormones, in men, is diagnosed rather late due to the lack of symptoms, while in women the appearance of excess of male hormones leads to the coarsening of the voice, growth of beard and mustache and hair loss on the head, rebuilding the musculature of male type, lack of menstruation, reduction in mammary glands. Such symptoms almost immediately attract attention and suggests a pathology of the adrenal gland.

Hormone producing adenomas of the adrenal glands are so characteristic symptoms, often the diagnosis can be made after inspection and conversations with the patient.

Probing large tumor through the abdominal wall does not speak in favor of its benign nature. The formation of large size in the retroperitoneal area can be a symptom of an adenoma of the kidney, but the latter has slightly different symptoms and easily determined with the help of ultrasound or CT. 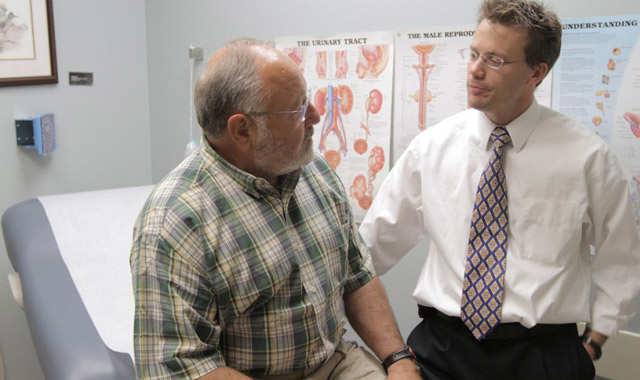 To confirm the guesses doctors use:

READ  Polyps in the stomach: treatment and symptoms, and removal 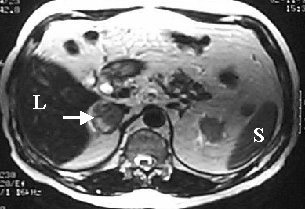 Due to the deep location of the adrenal gland in the retroperitoneal space ultrasound does not always produce the necessary amount of information, so computer and magnetic resonance tomography are the main diagnostic procedures in adenomas of small size. CT scan is often supplemented by the list, and the best results can be obtained in the study on multislice computed tomography (MSCT), which allows to obtain a large number of slices of the tumor.

A biopsy of an adenoma of the adrenal is very difficult because of its location, invasiveness of this procedure, a little justified, and a low diagnostic value for suspected benign tumors. Mainly this method is used when the expected damage on cancer metastasis at other sites.

The choice of tactics of treatment of an adenoma of the adrenal gland is determined by its form. So, functionally inactive tumors are diagnosed by chance, require surveillance, periodic (once a year) CT scan and blood work on hormones. At steady state, treatment is not required.

If the tumor secretes hormones, or its diameter exceeds 4 cm, then there are direct indications for surgical removal of the adenoma. The operation should be performed only in specialized centers with the necessary equipment.

The most traumatic is the surgery open access via a large incision up to 30 cm in length. A more modern method – laparoscopic removal via puncture of the abdominal wall, but the damage of the peritoneum and penetration into peritoneal cavity make the traumatic and the surgery. The most rational and the most modern way of tumor removal through the lumbar access without affecting the peritoneum. In this case, the patient after a couple of days can be discharged home, and the cosmetic effect is so good that the traces of the operation to others invisible altogether.

It is important to note that in case of any suspicion of an adrenal tumor, the patient should be referred to a specialized medical center where doctors are endocrinologists and surgeons will choose the best method of treatment for a particular patient.

Video: tumors of the adrenal gland — the treatment and defianately

Video: on the causes, prevention and treatment of diseases of the adrenal glands and pituitary gland