Chondrosarcoma is a malignant tumor of cartilaginous elements of the skeleton. It is considered one of the most frequent tumors of the musculoskeletal system. According to various sources, almost a quarter of all cases of neoplasias of the skeleton falls to the chondrosarcoma.

Among patients is dominated by people of Mature age from 40 to 60 years, but recorded cases of the disease in children, and the elderly. Significantly more tumor-prone men among patients approximately two times more than women.

The tumor can occur in any bone – flat and tubular, but usually affects the pelvis, bones of the shoulder girdle, limbs, spine. Perhaps the defeat of blades, ribs, cranial bones.

The tumor can grow in the bones unaltered, without apparent reason – of primary chondrosarcoma, and on the background of already existing benign pathological growths – achandra, gondrom, exostosis, dysplasia of cartilage. Secondary chondrosarcoma often occur in people past 40 years old.

distribution of the prevalence of chondrosarcomas by sex and age

Causes and types of chondrosarcomas

Causes of primary chondrosarcoma is not clear to this day. The disease develops in previously intact and healthy bones and joints and is up to 90% of all cases of chondrosarcoma. Secondary neoplasia (their is one in ten tumor) already have a substrate for its appearance:

chondrosarcoma of the femur in the picture

Malignant cartilage tumors can grow inside a bone or on its surface (peripheral chondrosarcoma), histological types include clear cell, undifferentiated and other forms. Important clinical importance is the determination of the degree of malignancy, which affects prognosis and treatment.

At the first degree of malignancy, the tumor is composed of relatively well differentiated chondrocytes, which do not show mitotic activity and are surrounded by a cartilaginous basis. The tendency to metastasize is low, chondrosarcoma grows slowly.

The second level (G2) is accompanied by an increase in the proportion of cells in the tumor mass, and surrounding them with myxoid (mucoid) material. At this stage, the chondrocytes are more widely shared, as evidenced by pathological mitoses. Possible fields of necrosis (necrosis) of the tumor tissue.

Third grade characterizes tumor in which many cells of different shapes and sizes (polymorphism), they actively share their (pathological mitosis), surrounded by the myxoid content. Such chondrosarcoma nekrotizirutee embedded in the surrounding tissue, vessels it begins to metastasize. 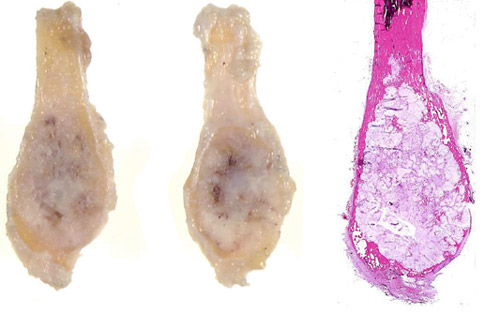 Manifestations of tumors of the skeleton usually reduced to subjective feelings, infringement of function of the affected region and the presence of visible or palpable education. Among the symptoms of chondroma are of great importance: 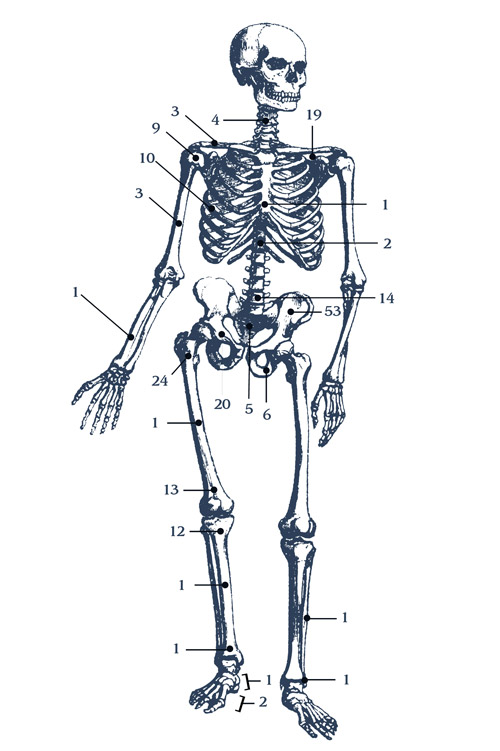 the most typical localization of chondrosarcomas, %

Pain syndrome is the main manifestation of the majority of tumors of the musculoskeletal system. Species with highly differentiated chondrosarcoma pain for a long time can be quite tolerable, then the patient takes her painkillers and not even think about the possibility of cancer, attributing the symptoms to sciatica, arthritis and other age-related changes.

With increasing size of the chondrosarcoma, the pain increases and does not pass completely even with high doses of painkillers, with significant germination of the bone becomes constant and unbearable.

Growing tumor deforms the limb or joint, detectable in the form of a dense fixed node, limited mobility of the limb. The skin over the tumor can become hot, with a large number of varicose veins. If the tumor is growing on the leg, the patient begins to limp, lose the shoulder girdle makes it difficult to follow the hand movements.

Described symptoms in highly malignant tumors grow much faster, and after a couple of months from the moment of appearance of neoplasia, the patient experiences severe pain, and tissue, it is possible to palpate or even see the seal and deformation.

Chondrosarcoma of the femur and pelvic bones gives a strong pain, as it involves the sciatic and other large nerves, possible swelling of the legs due to violations of the outflow of venous blood, and compression of and the germination of the pelvic organs is fraught with dysuric disorders from the intestines.

When chondrosarcoma of the spine, the patient complaining of severe back pain, inability to move, difficulty standing and sitting, and even lying down he feels the pain associated with a lesion of the nerve roots. Possible sensitivity disorders in the area of germination by the tumor of the nerve plexus.

chondrosarcoma of the hand

Chondrosarcoma of the foot, hands rarely. Its appearance can indicate pain in the small joints of the fingers, swelling, tight knot near the articular surfaces. To detect neoplasia in this localization easier, than, for example, in the large joints or spine, so the disease often is diagnosed at an early stage and amenable to gentle treatment.

With a high degree of malignancy and in the later stages of the disease to the local symptoms added to signs of intoxication, the patient loses weight, suffers from lack of appetite, nausea, fever. Metastasis aggravates the overall negative symptomatology manifested by the defeat of the internal organs (liver, lungs, brain).

A characteristic feature of the distribution of the chondrosarcoma is the formation of so-called «Bouncing» of metastasis, when tumor cells migrate to tissue surrounding the primary neoplastic lesion and chondrosarcoma appears around the jet area with a large number of newly formed micrometastases. This fact is associated the need for «wide» excision of the entire area of the neoplastic transformation.

As chondrosarcoma does not have a strictly specific symptoms and in many ways similar to other tumors of the skeleton, for its accurate diagnosis requires further examination, including:

Treatment of chondrosarcoma depends on the degree of differentiation of the tumor, its size, location. As with most cancers, doctors use all possible means – surgery, radiation, chemotherapy. 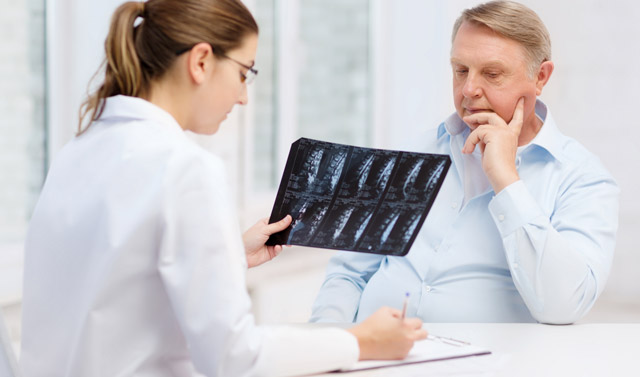 In recent years, approaches to cancer therapy have changed. A surgical method as an independent form of treatment is usually used in the case of highly differentiated entities, while highly aggressive malignant tumors require combination with chemotherapy or radiation that is administered in several courses before and after excision of the tumor.

Surgical removal remains the primary and most effective, especially in high-grade chondrosarcoma. The operation involves the excision of the tumor, all of the affected structures, the surrounding tissue in which the possible neoplastic growth. The types of operations for chondrosarcoma include:

It is important to make the removal of this volume, to minimize the chance of leaving even a single tumor cell, which may cause recurrence or metastasis. The downside of radical treatment becomes the need of amputation or assertional when large chondrosarcomas, and the patient is in danger of losing the joint or the whole limb. Indications for amputations and assertEquals are:

In other cases, the surgeon is forced to remove not only the primary focus of tumor growth, but also the entire shoulder girdle, the pelvic bones half – ipodstore-abdominal disarticulation, interscapular-thoracic amputation. Such intervention is extremely traumatic, make the patient an invalid, and therefore require additional plastic surgery and prosthetics. In addition nizkoeffektivnyj chondrosarcomas, indications for radical treatment may be relatively favorable variants of the tumor, in which organ-preserving intervention is not possible due to the large volume of the lesion. 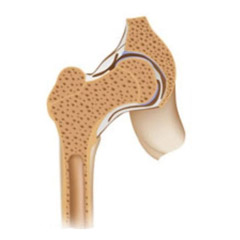 Organ-preserving methods of treatment are used for small tumors of the extremities, requiring the disposal of significant volume of tissue. These operations end with a plastic bone, possibly autologous own tissue, which allows to preserve to the maximum extent of the functional activity of the hands or feet. However, such sparing methods have their contraindications:

One of the modern methods of treatment, which is used in this type of tumors is radiosurgery. In fact, it is not surgery in the usual sense, because the tumors can be removed without incisions tissues. Radiosurgery is sent the action is strictly in the growth of tumors of the beam of ionizing radiation, which, like the surgeon’s knife, «cut off» the tumor from the blood flow and creates conditions not suitable for life and reproduction of the cell. Chondrosarcoma dies under the effect of radiation, but not instantly, it takes time, so the patient needs to be ready for what will have to wait until the tumor is destroyed, and in some cases requires repeated treatment sessions.

READ  Adenoma of the adrenal gland: symptoms and treatment of tumor 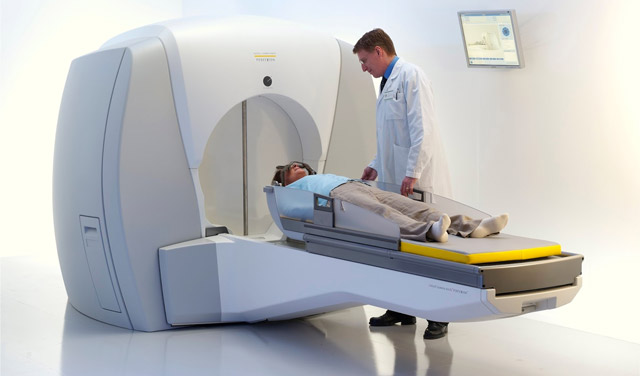 External beam radiation is rarely used in combination with other methods, but may not be independent due to the low sensitivity to the majority of chondrosarcomas. If the tumor is situated in such a way that can’t be removed surgically, or the patient’s condition does not allow it, that radiation therapy acts as palliative care to reduce pain, symptoms of intoxication, and ultimately, the alleviation of suffering of the patient. As the first stage of treatment radiation is warranted in the early stages of neoplasia that are sensitive to radiation. 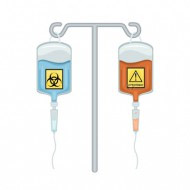 Chemotherapy does not give a complete cure from chondrosarcoma, therefore, is also used in composition of combined treatment. The chemotherapy drugs most sensitive vysokomehanizirovannoe forms of the disease and mesenchyma (small cell) chondrosarcoma.

Before surgery (neoadjuvant) chemotherapy is assigned to kill micrometastases and reduce the size of the primary tumor, which facilitates the task of the surgeon. An important benefit of the preoperative hemiauchenia I think the ability to determine sensitivity to tumor tissue and, if necessary, after removal of the tumor, chemotherapy may be adjusted. In the postoperative period are assigned up to 10 courses of adjuvant chemotherapy to eliminate the remaining tissue chondrosarcoma and metastasis.

Among chemotherapeutic agents in chondrosarcoma the most effective doxorubicin, methotrexate, cisplatin, vincristine, and others who are selected individually based on the morphological characteristics of the tumor.

The prognosis for chondrosarcoma depends on the degree of tumor differentiation, response to therapy, time of initiation of therapy. In General, it is better than in malignant osteogenic tumors, and five-year survival after radical operations reaches 25%.

After the treatment the patient requires constant CT-, MRI-monitoring and regular visits to the oncologist. When the aggressive tumor first two years after treatment the doctor will need to visit every three months in the third year – once a quarter, the next two years – every six months, then annually.

Patient survival is determined by the stage of disease and degree of differentiation. At the first stage, up to 90% of patients have a chance to live five years or more, the second – slightly more than half, and when running the chondrosarcoma survival of only a third of patients.