Lymphangioma is a benign tumor composed of lymphatic vessels. Disease up to 25% of all vascular tumors of childhood, viewsas at the age of 1-4 years.

The tumor is quite common, and although generally does not pose a threat to the life of the patient, however, can significantly degrade her. Frequent relapses and the absence of effect of traditional surgery make the problem of removal lymphangioma extremely important, and scientists from different countries continue to search for safe and effective treatment of the tumor.

Lymphangioma grows slowly, but can reach huge sizes, putting pressure on neighboring organs and tissues and leading to disruption of their function. Favorite localization of the tumor are the face, neck, axilla, but it may detect in the region of the mediastinum, bowel mesentery, retroperitoneal space.

Originating in the prenatal period, tumors gradually increases and becomes noticeable in the early years of a child’s life. In adults too it is possible to form lymphangioma, but the children – the bulk with this disease. Lymphangioma resembles the hemangioma, which can also develop as a malformation of blood vessels and affects mostly young children, however, the hemangioma usually better responding to therapy.

Congenital lymphangioma can be detected during pregnancy when passing a routine ultrasound. In the fetus it is usually located in the neck and mediastinum. The prognosis in such cases detects the presence of other malformations and associated pathology. If lymphangioma single other anomalies it is not revealed, then the woman is shown dynamic monitoring. In the case of multiple defects the doctor will be forced to raise the issue of abortion.

Causes and types of lymphangiomas 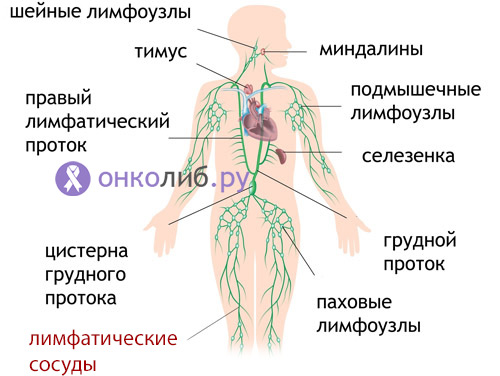 Causes of lymphangioma not been established, and scientists are constant disputes about the origin of this neoplasm. As in the case of hemangiomas that occur frequently even in utero, lymphangioma can be a peculiar malformation of the lymphatic vessels. This vascular disease leads to disruption of lymphatic drainage, the accumulation of fluid in the lymphatic vessels, whereby the latter are expanded and turn into a cavity.

Lymphangioma in children is usually formed by the type of malformation of blood vessels in utero. By the time of birth, the tumor already exists and grows in size, so notice it even in the first months of baby’s life. Usually it occurs on the face, neck and in the mediastinum.

Another point of view considers lymphangioma as a true tumor. This opinion is based on phasic course of the disease, when the first stage is the proliferation (multiplication) of cells of the tumor, and the presence of neoplasia growth factors and receptors to him which is not typical for defects.

Probably the way of the formation of true tumors are lymphangioma adults. In this case, on the background of inflammatory process, infectious diseases or other tumors breaking the flow of lymph, causing it to stagnate, the cells of the lymphatic vessels begin to proliferate, and form a conglomerate tumor of the lymphatic vessels or cavities filled with lymph.

Depending on the characteristics of the structure of lymphangioma there are several varieties of it:

Surface capillary lymphangioma looks like a local thickening of the skin or the subcutaneous layer, the boundaries of the tumors are unclear. The cavernous variety is usually reminiscent of the soft node consistency, which collapses with pressure and restores its size as the filling of the cavity by lymph.

Cystic lymphangioma is a cavity, which can reach several tens of centimeters in size. The skin over the education is not changed, however, when large tumors it becomes thinner, and through it Shine the small blood vessels.

Especially dangerous is cystic lymphangioma neck or mediastinum when large amounts of the neoplasm compresses the large vessels, the trachea, the bronchi, leading to disruption of their work.

Superficial tumor often takes only cosmetic discomfort of tumor masses, and skin changes in the form of bubbles. 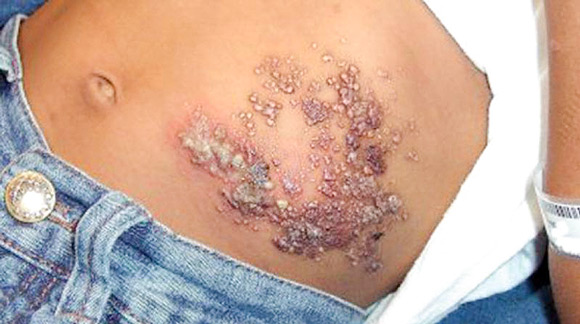 Large cystic neoplasia can cause a serious defect, lying on the face or neck. The tumor is painless, and palpation may detect multiple cavities filled with liquid. 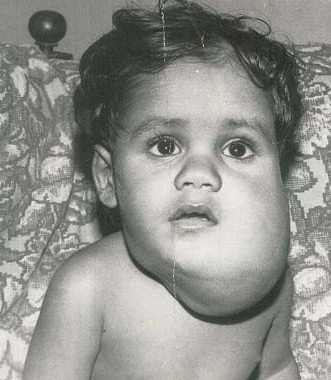 Lymphangioma persons become noticeable in babies in the form of a local increase in tissue volume. Sometimes the tumor may allocate a transparent liquid.

A special kind is lymphangioma language, leading to the so-called macroglossia. Language increases in size, fits poorly in the mouth, and the patient has difficulty chewing, swallowing, intelligible reproduction of speech.

Dangerous complication of lymphangioma is inflammation with infection and swelling. While the tumor increases, compacted, it becomes painful. The skin in the growth of lymphangioma blushes. Changes and General condition of the patient: there are fever, weakness, signs of intoxication, especially in young children.

Puncture and evacuation of pus does not always give a positive result, as the drain could not all vascular cavity. The process may recur and require surgical treatment.

Diagnosis of lymphangiomas is based on inspection and palpation of the tumor, carrying out x-ray and ultrasound studies may – lymphography. The final diagnosis is established according histological examination of fragments of the removed tumor.

Treatment lymphangioma involves the complete removal of the tumor. Irradiation and chemotherapy for these tumors is inefficient, therefore, until recently, the main way to get rid of the tumors was surgery. 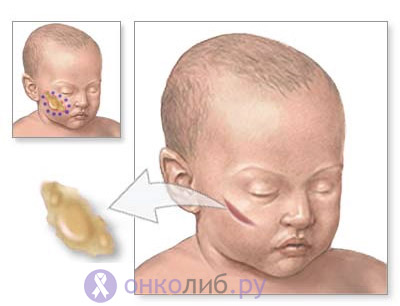 simple deletion is not the best method of treatment of lymphangioma

Standard surgery to remove lymphangioma often complicated lymphorhea (after lymph) and swelling. Lymphorrhea can last for several weeks, and in some cases is the reason for re-intervention. Especially dangerous are complications when the tumor in the mediastinum, neck, face. Found that after surgery, stable recovery is possible to achieve no more than 75% of patients, others require repeated treatment and the elimination of complications.

Promising treatment using picibanil (OK-432). The introduction of this drug leads to a decrease of the tumor with minimum side effects. Treatment is well tolerated and does not require long hospitalization. The disadvantage of this approach is the fact that it is not always possible to achieve the expected result. Some patients need multiple repeat injections picibanil, but because of the relative security method is considered the treatment of choice in many European countries. Unfortunately, the drug is registered and is not available everywhere, so patients are forced to go for treatment in foreign clinics.

Approach to minimally invasive therapy of different types lymphangioma different, as the structure of the tumor determines the possibility of its removal.

At the cavernous lymphangiomas can we gradually treated with microwave hyperthermia and subsequent hardening of the tumor cavity. Control of each stage of treatment carried out with ultrasound that captures a gradual decrease in the size of the tumor and its replacement by connective tissue. For the treatment of cavernous lymphangiomas may require several sessions of UHF-therapy and sclerosing conducted with an interval of 3-4 months. 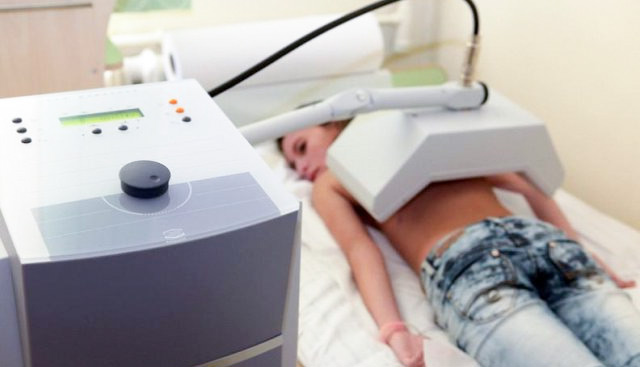 In cavernous lymphangiomas of the mediastinum or the neck, microwave heating can be performed directly during surgery, while inaccessible areas of the tumor are amenable to sclerotherapy.

The effect of microwave therapy due to the heating of tumor tissue, which is accompanied by destruction of the lymphatic vessels and sclerosis. The procedure does not cause discomfort because of the destruction of tumor blood vessels enough temperature not more than 42 degrees. To strengthen the effect of microwave heating is inserted into the tumor sclerosing agent (fibro-vane, ethoxysclerol), «welding» vascular cavity and causing the replacement of the tumor by connective tissue.

The majority of patients using this minimally invasive technique can achieve cure, and one third need additional surgery to remove scar tissue remaining on the site of tumor growth. Surgery is more of a cosmetic purpose and is not accompanied by complications because of the tumor gone, but visible scar on exposed skin can cause discomfort to the child, his parents or adult patient.

Features of treatment of cystic lymphangiomas

Cystic lymphangioma presented a cavity filled with lymph, require a fundamentally different approach. For their treatment it is necessary to produce evacuation of the contents, and only then can you make microwave therapy and sclerotherapy. Usually made active aspiration of lymph from the vascular cavity (or cavities), after which the tumor is filled with the radiopaque substance. On the radiograph, the doctor evaluates the shape, size and especially the location of the cyst, followed by removal of the contrast and hardening.

cystic lymphangioma on the leg

For sclerosing cystic lymphangiomas is preferable to use drugs in the form of foam, which ensures greater area of contact of sclerosant with the vascular cavity. Within a few days after the start of hardening of the cyst content aspiration is continued, and termination of expiration of the cerebrospinal fluid is considered to be an indication for removal of the catheter from the growth zone of lymphangioma.

Used until recently, the puncture lymphangioma without sclerosing gave unsatisfactory results of treatment are mainly due to the fact that the tumor was a constant production of lymph, which spread the walls of the cyst, and even led to the formation of new vascular cavities. Continuing education lymph contributed to the recurrence of the neoplasm and not allowed to get rid of it. Active removal of content, with subsequent hardening does not allow the tumor to restore its size, lymphorrhea is terminated about a week, and vascular cavity scar.

For small lymphangiomas located in the oral cavity, it is possible to use laser, cryotherapy, coagulation electric current or radio wave treatment.

Described minimally invasive techniques for the treatment of lymphangiomas applicable cavernous and cystic neoplasms of different localization. Complications are rare and minimal, and healing is possible to achieve in most patients after a few sessions of hyperthermia and sclerosing.

Despite the minimal invasiveness of the procedures described, treatment of lymphangiomas should be performed only in a hospital and in an outpatient setting are allowed only puncture of the cyst in a matter of urgency when the tumor causes severe dysfunction of internal organs and blood vessels. Children the treatment of lymphangiomas is recommended from the age of six months. Lymphangioma not prone to malignancy, the prognosis after effective treatment is favorable.

Video: report about the operation to remove lymphangioma