Oncology is replete with complex and confusing terms, the value of which are not easy to find or understand a person without special education, but the opinions of doctors and already diagnosed are pushing to search for the meaning of certain definitions. Malignancy is among them. How to treat this condition? Urgently to run to the doctor, fearing for his life, or have the time and opportunity to heal without resorting to surgery? Questions for patients a lot…

Malignancy (malignancy) is the acquisition by the cells of the signs of malignancy. Most often, malignancy can be observed in the changed tissue in the background of any inflammation, ulcers and erosions, benign tumors, scarring, etc., although do not exclude the possibility of its development and in healthy tissues. At the heart of this process is a genetic mutation that triggers a violation of the differentiation and maturation of cells.

It is no secret that the cells are endowed with signs of malignancy, are continuously formed each of us, however, they will be the beginning of a tumor or be removed depends on the condition of the body and even external conditions.

Thanks to the coordinated work of the immune system components is pathologically changed, obviously damaged and abnormal cells are removed from the body in order to avoid their uncontrolled reproduction. Under adverse conditions, immunodeficiency, decrease of anti-tumor protection in old age, the probability of preservation and further development of tumor cells increases, and therefore the risk of Contracting a dangerous disease becomes higher.

Malignancy is the initial stage of the formation of a malignant tumor, so to panic at the discovery of this term in medical records is not necessary, because the timely assistance of a specialist will help avoid further progression of the process.

In fact, malignancy is not a diagnosis, but only a change is detected, as a rule, in already damaged tissues or organs. However, to let things take their course, trusting that it will «blow over» or «resolve itself», not because malignancy is a step in the formation of malignant tumors that the body has passed.

Causes and signs of malignancy 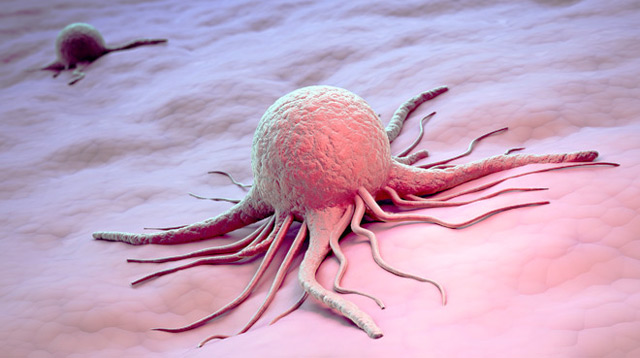 The causes of the malignancy of cells akin to those that cause the onset of tumors in humans. Among them:

Malignancy does not have symptoms, so the patient may try to identify it yourself is unlikely to succeed. Given that in most cases, the malignancy happens where there is already some kind of pathology, only the vigilance of the patient can help to identify the preconditions for cancer. Even if the symptoms of deterioration there, and the patient feels quite good, the surveys in the presence of predisposing factors and chronic diseases will not be superfluous and may be able to help in early diagnosis.

The signs of malignancy cells detected by histological examination of fragments of tissue, and the changes could be seen as dysplasia, in which the term «malignancy» is pretty closely related.

All the processes that occur in the tissue before the appearance of invasive cancer can be regarded as a phenomenon of malignancy, they – dysplasia severe degree, which more accurately describes the nature of the pathological changes.

Talking about malignancy such features as: 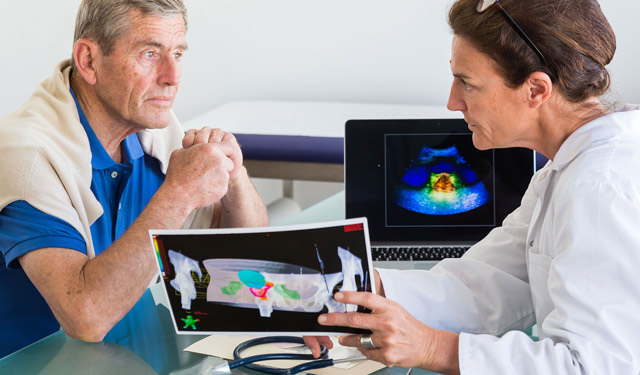 The likelihood of malignancy depends on many factors:

High risk of malignancy have:

These are just some examples of conditions in which the possibility of malignancy is quite high.

In the presence of family forms of cancer (colon cancer, breast cancer or ovarian have blood relatives) special consideration should be given to precancerous changes in the organs, because the risk of malignancy in these individuals at some times may exceed that of other people.

It should be noted that the same condition is not always equally behaves in different organs or tissues, therefore, the location of the pathological focus must necessarily be taken into account. For example, it is absolutely benign epithelial tumors papillomas appearing on the skin, very rarely are the source of cancer, and that, as a rule, in cases of permanent mechanical irritation. At the same time, papilloma of the bladder or of the ureter – a dangerous phenomenon, which is accompanied not only by subjective discomfort, bleeding, violation of the outflow of urine, but a high probability of malignant transformation. 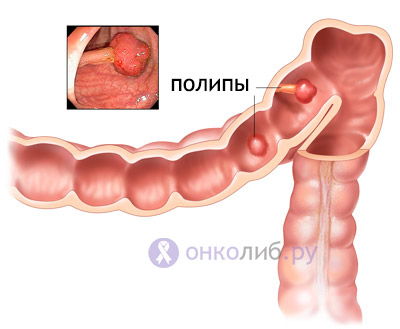 polyps in the intestines

The term «polyp» is familiar to many and, as a rule, its detection is quite understandable concerns of the patient. Polyps, often growing in the gastrointestinal tract or the uterus, gallbladder, nasal cavity or the bronchi, can be a source of malignancy in the future. Special attention should be paid to the state when multiple polyps, recur, are of a family character. Some forms of these lesions, for example, diffuse polyposis family, belong to the obligate precancer, ie malignancy polyp formation and the cancer occurs sooner or later in any case.

Adverse factors contributing to the degeneration of normal cells of a polyp into cancer may be the influence of gastric juice or intestinal contents, hormonal changes and age in the case of tumor pathology of the endometrium, as well as the already existing genetic mutations. The important role played by the size of the polyp. So, if the diameter exceeds 3 cm, the risk of malignancy is extremely high. Against polyps, doctors almost always choose the tactics of removal, except in cases of multiple small intestinal tumors, which are technically completely remove extremely problematic.

Polyps in the uterus are removed always, and of particular danger are these «growths» in women of advanced age when, for whatever reason, resumes the reproduction of cells of the mucous membrane (endometrium) appear and glandular endometrial polyp. The risk of malignancy is especially high when recurrent, multiple, fast-growing polyps, accompanied by bleeding and inflammatory process.

Malingsia ulcers of the stomach and intestines

Stomach ulcer – a fairly common disease, and the risk of malignancy exists in all cases. Although some recent studies may refute the role of the ulcers in cancer development, long-term monitoring of such patients do not allow to agree with this point of view, and according to statistics, zlokacestvennoe fifth of all chronic ulcers of the stomach. 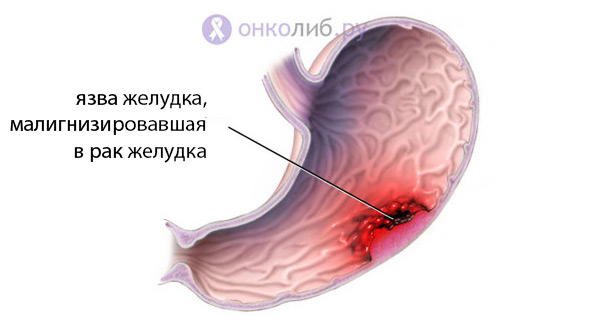 If you have an ulcer excessive acidity of the gastric contents, the frequent recurrence of inflammation with subsequent healing and growth of connective tissue leading to sclerosis and atrophic changes in the stomach wall, which can not contribute to changing the properties of cells located in the area of ulcerative lesions.

The most likely malignancy of gastric ulcer in older persons in the localization of it in the pyloric, anterior, posterior wall or the greater curvature, with H. pylori infection, improper food, excess of food carcinogens and irritating ingredients.

Malosnezhnaja ulcer – this is cancer of the stomach, and therefore the signs of malignancy in this case can be seen by the patient. Noticeable weight loss, increased pain and permanent character, weakness, intoxication, perversion of appetite and other symptoms of stomach cancer should be alerted when identifying them in individuals with a long ulcer history. These symptoms mark the already extensive cancer of the stomach, so the phase of malignancy can «skip» if you do not regularly take tests.

In the duodenum chronic ulcer also diagnosed rather frequently can be paired connectors in the back and the front of the body, however, in contrast to similar lesions of the stomach, malignancy of the ulcer of the duodenum is very rare due to a more «soft» conditions for the lining (no abundance of enzymes and acids in the stomach). 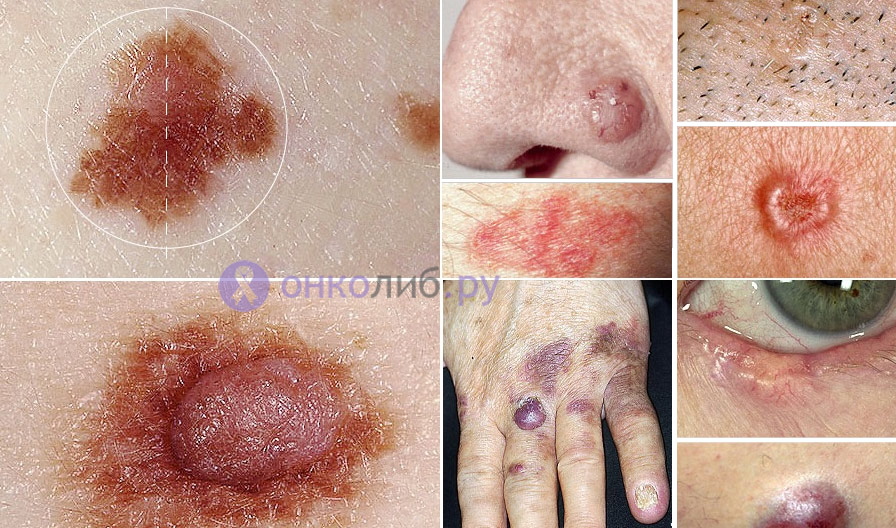 examples of premalignant changes of the skin, prone to malingsia

Nevi (moles) is a benign tumors composed of cells that contain the pigment melanin. These cells are mostly located in the skin and need to neutralize the aggressive effects of solar radiation. In some parts of the skin, in the retina they accumulate in tumor masses, called the nevus. Frequent injuries nevus, friction of clothing, excessive sun exposure ultraviolet radiation in Solaria is a high risk of malignancy nevus, which can develop one of the most dangerous malignant tumors – melanoma. People have many age spots and moles (nevi), or white skin, in which melanin pigment is not enough, you should be very careful and attentive to their skin, so as not to provoke the development of tumors even seemingly harmless tanning on the beach.

how to distinguish a healthy mole (nevus) melanoma

Benign tumors and diffuse processes involving excessive cell proliferation, can be considered as a risk factor for cancer. However, it should be noted that the malignancy of the tumor is not always the case and depends on the type of tumor. For example, lipoma is considered a completely benign tumor when the risk of malignancy is virtually zero, while endometrial hyperplasia or adenomatous polyp in the uterus can quickly transform into cancer given the right conditions.

Examples of malignancy can cause a lot, but the majority of patients with a similar diagnosis are concerned about what to do next?

First, no need to panic, because the cancer as such still began to gain strength, and have the time to deal with it. Second, early treatment gives you the chance to get rid of the disease, so you need to immediately go to the doctor for competent and qualified help.

Malignancy – a dangerous phenomenon, but not a death sentence, and this stage of malignant transformation of cells, can only be cured by a specialist oncologist and only by bringing modern methods to traditional medicine.