The renewal of the cancer as a result of recurrence or migration of cancer cells to other organs is possible even after a long period after radical surgery, not to mention the cases when neoplasia the doctor or the patient was not known, the disease is asymptomatic and treatment is not carried out. Sometimes the first diagnosis of the person in the Oncology clinic, are metastases in the liver, lungs or other target organs.

This diagnosis really sounds like a death sentence, because even uninitiated it is clear: the «evil» cells spread throughout the body, multiplied and formed a new malignant foci, which are difficult to quantify and to remove. Cancer can be eliminated until the cancer cell has not left the place of his birth, and metastasis casts doubt on the successful outcome of treatment.

The ways of spreading of cancer cells

Cancer, in contrast to benign tumors, not limited to any one area. It grows in neighboring tissues and spreads to other organs. The proliferation of cells that have lost intercellular communication, broke away and started his journey through the body is metastasis.

This process can be realized in three ways:

the spread of metastases throughout the body

Some diseases are so aggressive that even at the early stages can penetrate into the lymph nodes or other organs (nearby or remote), forming microscopic foci of tumor growth. Ocaac not always able to go into full-fledged metastatic tumor. Listed with a current blood or lymph, and viable cancer cells can lay low and long persist without growth. This occurs in cases of sufficiently high General or local immunity, which prevents the growth of tumor substances.

Thus, delayed or inadequate treatment, or lack of it in case neoplasia was not recognized at the beginning of its development threatens to further dissemination of the tumor process — the transfer of malignant cells, i.e., metastasis. 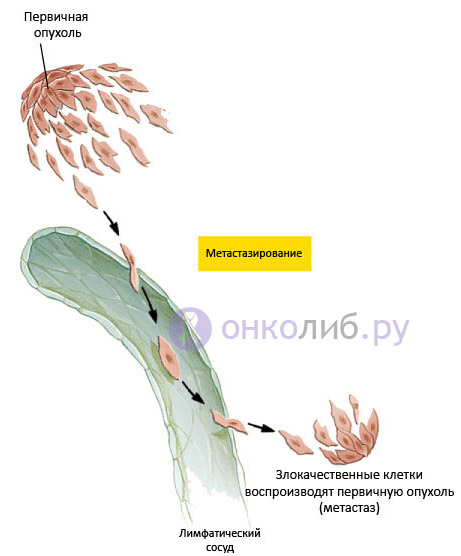 Among all cancers the bulk of the neoplasia accounts for cancers, that is, epithelial tumors (cancer of the uterus, lungs, stomach, etc.). The predominant way of metastasis of cancer is lymphogenous way. Usually the first blow goes to the regional lymph nodes located near the primary tumor focus. So, the first metastasis in gastric cancer detected in the lymph nodes, which are in the course of the minor and major curvature around the antrum, in the bottom.

With further progression process, cancer cells migrate with the flow of lymph and involve other lymph nodes that may be located at a considerable from the primary tumor distance. In such cases, the metastases of gastric cancer can be found in the lymph nodes of the gates of the spleen, in mesenteric, para-aortic and even seemingly very much in unexpected places. In advanced stages of gastric cancer can be detected in the metastasis of Virchow left supraclavicular lymph node, reflecting the retrograde path of advancement of malignant cells against the flow of lymph.

Other examples of distant metastasis of gastric cancer are metastasis Schnitzler and Krukenberg that arise when retrograde drift of malignant cells from the lymph tissue in the perianal (around the rectum) and one or both ovaries (the so-called cancer Krukenberg).

It is worth noting that often oligosymptomatic stomach cancer first diagnosed at detection of such distant metastases, for example, the woman turns to the doctor with gynecological problems, and gets an unexpected and bad diagnosis (stomach cancer).

One of the most frequent variants of epithelial neoplasm is lung cancer, which also tends to metastasize to the lymph nodes. The first new foci appear in peribronchial and bifurcation lymph nodes, in the future, cancer cells are able to reach mediastinal, cervical, and supraclavicular areas.

Very common in our day breast cancer also after a while draws in a malignant process of the lymph nodes, with tumor emboli detected in the parasternal (near the sternum), axillary, subclavian lymph nodes. 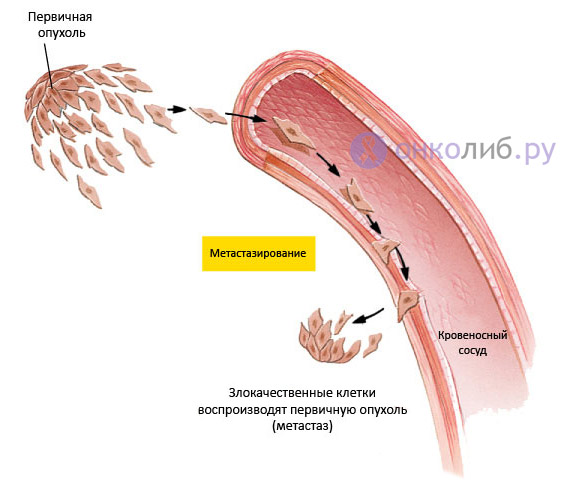 Hematogenous route of metastasis, realised by means of blood vessels, the most characteristic for connective tissue tumors (sarcoma), however, epithelial (cancers) in advanced cases is also not left out and is often used this way. In some types of tumors may cause brain metastases. It is also distant metastasis, with a very poor prognosis because it not only characterizes the advanced stage of the primary tumor, but is accompanied by damage of the vital structures of the Central nervous system (increased intracranial pressure, brain edema and death of the patient in a short period of time).

Liver metastases are formed from cells of the cancer, brought there by the blood or lymph. They occupy the second place (first – cirrhosis) mortality for diseases of the liver.

Most often liver metastases gives cancer that started in the gastrointestinal tract, mammary gland, lungs. At least in this target organ appear metastases in cancer of the skin, thyroid and pancreas. Thus, the liver metastases can be expected from tumors: 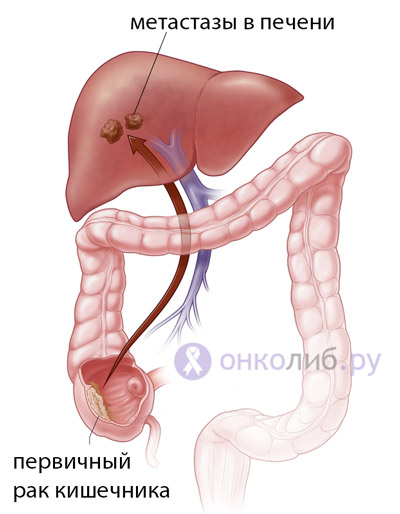 Metastatic tumors in the liver, in most cases, its clinical manifestations reminiscent of primary hepatocellular carcinoma, the characteristics of which (hepatomegaly with pain in upper abdomen, high activity of alkaline phosphatase) similar to the specific symptoms of liver metastases:

The presence of metastatic foci in the liver in the case of asymptomatic primary tumor involves extensive diagnostic search: ultrasound scanning, computed tomography, target biopsy. Unfortunately, when metastasis of any tumors in the liver, the prognosis pessimistic and the efforts of the doctors are frustrated, patients live with cancer for a long time: someone dies in 2 months, and someone in six months.

The second place on frequency among of defeat of target organs in many malignant processes belong easy. The tumor cells form a new tumor in the lungs, where people come mainly through hematogenous, rarely nodal. Sometimes single metastases in the lungs can remain for a long time the only clinical sign of cancer. Even there exists an opinion that these tumors are able to metastasize. In this case, they are likely to penetrate into nearby lymph nodes. 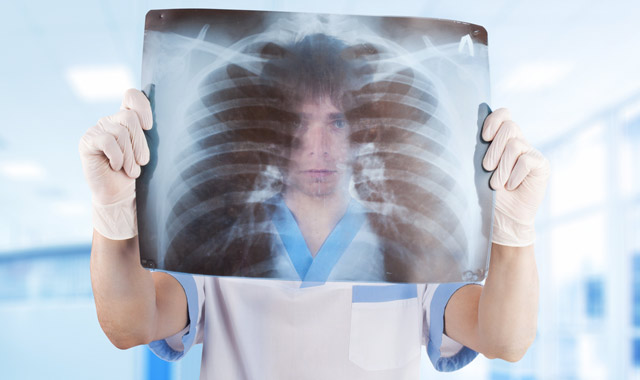 Pulmonary metastases are characteristic for the following types of neoplasia:

The symptoms of metastases in the lungs for a long period of time may not show itself (before engaging in a process of the pleura), they are similar to those of the primary tumor (cancer in the body):

Often metastases in the lungs give clinical manifestation before the primary tumor.

Methods of treatment of metastases in the lungs

Treatment depends on many factors: the nature of metastasis, the type and stage of the source of metastases, the General condition of the patient. Methods of treatment of metastatic process in the lung is not particularly different from those in other cancer pathology: 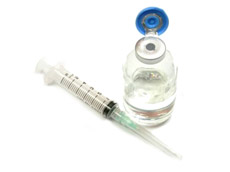 Individual centers if they are available for prompt intervention, can be removed surgically, but this should take into account the status of the primary tumor (type, location) and to carry out radical treatment, based on existing circumstances.

The prognosis of metastases to the lungs, mostly unfavorable, because the defeat of this body reflects the advanced running, form malignant tumors, which are one of the most common causes of death from cancer.

Secondary tumor nodules in the bones, perhaps, occupy third place after the metastatic processes in the liver and lungs. Primarily affects various sections of the spinal cord. While the clinical manifestations are so pronounced that significantly affect the patient’s quality of life. 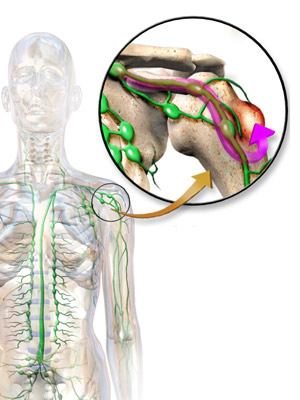 Bone metastasis give neoplasia of different kinds and of different localization for which the spine is a «tasty morsel» for a new «settlement»:

Often new lesions malignant process are formed in the lumbosacral and thoracic spine. Often target for metastasis are the ribs and thighs, while the shoulder, bones of the skull and in the cervical spine they occur relatively rarely. Metastases in the spine and other areas, usually give the typical symptoms:

READ  The treatment of cancer folk remedies: methods if that helps 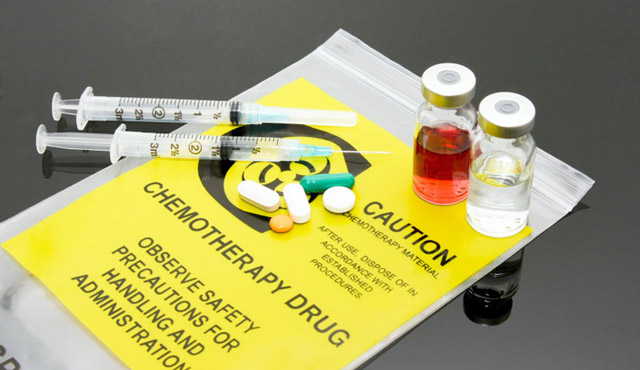 In the treatment of metastases when the primary tumor stage and there is at least some hope for a cure (cancer of 4 degrees cancer the hope is fading away), oncologists adhere to generally accepted treatment algorithms of using:

In General, the prognosis and life expectancy depends on the type of the primary tumor, its localization and the nature of metastasis in the bone.

Issues of treatment and forecasts have already been raised above, but perhaps we have some repeat. 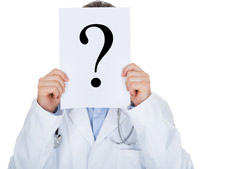 Specific treatment of metastases does not exist. Traditional methods: chemotherapy and radiation, which lead to slower growth or partial regression of the tumor, allowing relieve suffering and prolong life. Surgery is used rarely when there is a possibility of removal of the tumor together with single metastases.

Timely removal of regional lymph nodes and tumors sometimes allows to significantly increase life expectancy (10 years or more), but in other cases, the prognosis is very serious, for example, the diagnosis «a cancer of 4 degrees with metastases» is set if the remote foci of metastasis even with a relatively small size of the primary tumor. In short, the existence of remote metastases by far makes the prediction of malignancy is poor.

Video: metastasis is not always a death sentence! Radioembolization for local process in the liver

Cancer is an irreversible process. Sooner or later the patient dies of cancer. But the question is: sooner or later? Modern diagnostics and knowledge accumulated in the field of Oncology often allow you to find the primary lesion, and to take emergency measures to eliminate it, however, the mortality from malignant tumors is still at a high level. Often the cause of metastasis, late diagnosis and delayed treatment. The main goal of cancer services is not only search of new methods to detect tumors at early stages, but accessible to anyone, no matter what wilderness he lived. Plays a significant role and education of health workers, aimed at clarifying the problems, the importance of understanding and participation of the patient for early treatment and non-medication.

Video: the stages of cancer and metastasis processes