As the study of peculiarities of development of various pathological processes and patterns of tumor growth, scientists offered more and more varied methods of treatment. On the development of effective and, at the same time, safe methods of combating disease are specialists of different profiles – doctors, biologists, physicists, geneticists, and well-coordinated work of entire research teams gives hope for a cure of cancer, which is still often considered incurable. Photodynamic therapy is a modern and very promising technique which is well-established in various fields of medicine and, very importantly, has more advantages than disadvantages.

Photodynamic therapy is based on the use of photosensitizing substances that increase tissue sensitivity to optical radiation, and a beam of light of a specific wavelength that is most absorbed by the photosensitizer used. This treatment is widely used not only in Oncology. Good results shows its use in diseases of the skin, female genital organs, precancerous changes of different localization, chronic inflammatory processes.

Photodynamic therapy of cancer in post-Soviet countries has been used relatively recently, only about 10 years ago, while in Europe and the USA this method has been known since the end of the last century. The inability of mass and wide application of PDT in clinical practice was associated with the high toxicity of photosensitizing drugs and the likelihood of undesirable side reactions, but the persistence of the researchers and numerous clinical trials have borne fruit: in 1993 was the first relatively safe drug Photofrin (USA), which, although it has side effects, is still used to this day. 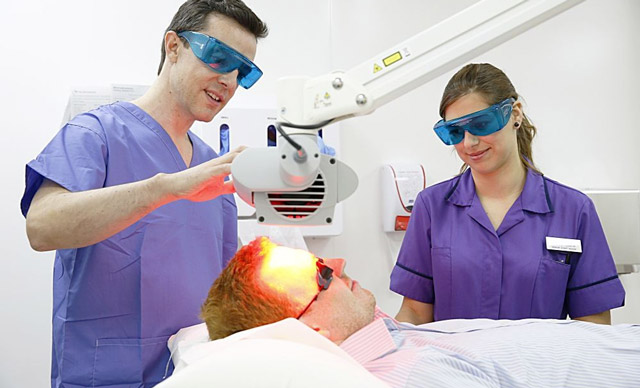 Not without the participation of Russian scientists was the next step in the development of safe photosensitizers. So, the drug of the second generation fotoditazin was synthesized by Russian scientists on the basis of chlorophyll in algae and has a low toxicity and reusability.

Photodynamic therapy in Oncology has found its application due to its high efficiency, possibility of sighting effect on tumor tissue and a combination of chemotherapy and radiation treatment. This influence has fewer contraindications than traditional ways of dealing with the tumor, and therefore can be applied even in debilitated patients and patients with severe concomitant diseases.

What happens during PDT?

The method of photodynamic therapy is the use of a beam of light and a photosensitizer – a substance that increases the tissue sensitivity to optical radiation. The role of the photosensitizer acts as a pharmacological drug which is administered intravenously, but maybe a local application and even orally in the form of powders. The photosensitizer accumulates selectively in the diseased tissue, therefore the risk of adverse reactions from other organs is minimal. When exposed to light energy at the tissue, nikopoulou photosensitizer, it produces a chemical reaction with the formation of free radicals and active oxygen that damage cells in the irradiation zone and lead to their death.

READ  Targeted therapy in cancer treatment, in Oncology, the drugs

It is important to note that this exposure affects only the tumor cells, whereas the connective tissue stroma remains intact, and after treatment, it could be completed by healthy cells. Damage to the microscopic blood vessels that supply the tumor with blood, also contributes to its destruction.

Drugs with photosensitizing effect is often introduced intravenously or applied topically, then within 24-48 hours they are accumulating in the affected area, and then the patient is directed to the laser irradiation.

Subsequent destruction of tumor tissue may take several months, but since this process is relatively slow, include natural mechanisms of purification of the zone of necrosis using cells macrophages, absorbing tissue detritus, and side effects and virtually no complications are observed. As the destruction of the tumor, its place is occupied by healthy cells.

During clinical studies it was found that the photosensitizer chlorin E6 is able to show its activity after oral administration, and under the action of normal daylight. This fact formed the basis for the development of the drug with prolonged action, which can be applied at the stage of rehabilitation of cancer patients and for prevention of recurrence of the tumor. For the first time a substance with a photosensitizing effect for internal use was produced in Russia and was in the form of the drug prolonged in 2005.

The benefits of photodynamic treatment can be considered: 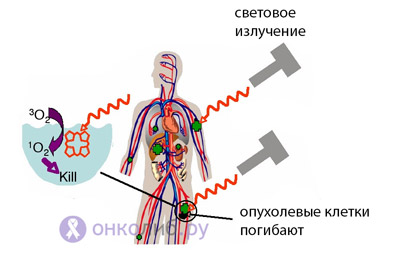 Photodynamic therapy can be conducted in multiple sessions, it is safe for the patient, but often enough, and one procedure. Photosensitizing drug is eliminated from the body on the second day, does not tend to cause allergic reactions and fever, so re-use is considered safe.

In the treatment of tumors of the bodies having a thin wall, the risk of perforation is high, especially in case of large tumor size and germination it of the body wall. Unlike radiation, damaging everything in its path, photodynamic laser does not damage connective fibers, so you can use this type of treatment for tumors of the bronchi, stomach, intestines, bladder. For example, patients with lung cancer, when the tumor closes the lumen of the bronchi and interferes with normal breathing, restoration of the air occurs within 3-4 days after the procedure, the healthy tissue of the bronchial tree remains unaffected by the laser.

Photodynamic therapy may be early forms of cancer, as an independent method of treatment, if radical surgery is not possible for any reasons (a serious condition of the patient, accompanying pathology). The combination of PDT with other types of cancer treatments and increases their efficiency, and irradiation with a laser prior to surgery reduces the incidence of postoperative recurrence of the tumor.

Photodynamic therapy is practically devoid of shortcomings, but still they are – the toxicity of certain drugs, the impossibility of their use in individuals with increased sensitivity to photosensitizing substances. Contraindications to PDT can be diseases of the liver, kidneys, heart decompensation. In addition, pregnant women and nursing mothers are also this method of treatment is contraindicated.

Because the photosensitizers increase the sensitive tissue to optical radiation, after the procedure it is advisable for some time to avoid excess sun exposure.

Laser therapy is becoming increasingly popular due to its effectiveness and relative safety. Apparatus for such effect is available not only to large clinics, and outpatient agencies, beauty salons, gynecological offices in antenatal clinics. 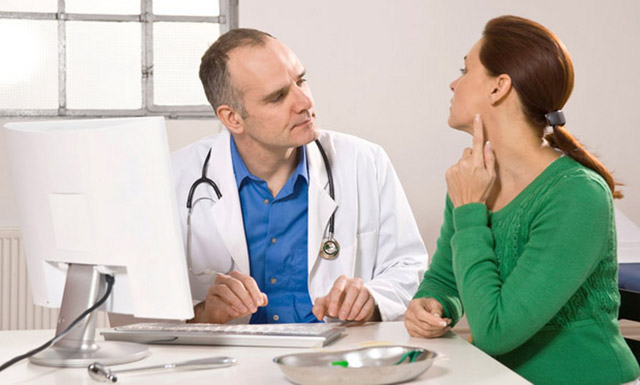 The impact of the laser on any fabric causing her death, whether the tumor or another, it is a benign pathological process, therefore, the application of PDT is not confined to Oncology. With the success of this method is used for the treatment of benign and precancerous processes of the cervix, long nonhealing ulcers, and also in cosmetics.

In the case of pathology of the uterus when the doctor aims to influence on the cervix, but women have fibroids, endometriosis or other process, accompanied by enhanced cell proliferation, it makes sense to use a photosensitizer for topical application in gel form. This excludes the possibility of its falling into other parts of the reproductive system.

In gynecological practice photodynamic treatment method demonstrates high efficiency with endometriosis, pseudo cervix, and also of leukoplakia and dysplasia are considered precancerous changes. The advantage of this treatment is the lack of scarring and deformity of the cervix, which is especially important in young women who plan future pregnancy. 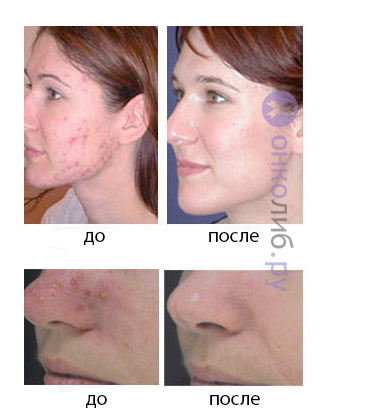 In cosmetology, photodynamic therapy is used to remove scars, struggle with long-existing pustular skin lesions, acne, age spots, acne disease. Improvement of the trophic tissue after the procedure helps rejuvenate the skin, restore the natural water balance, the increase in the number of fibroblasts cells that produce collagen, is very essential aging skin with signs of aging, so photodynamic therapy is very popular among the fair sex.

Some photosensitizers (δ-aminolevulinic acid) is able not only to the formation of active radicals in the tumor, but also to fluorescence, therefore, their use is justified on the diagnostic phase of the cancer process, and during surgery to control the radical removal of the tumor. This approach is practiced to neurosurgery in the treatment of malignant gliomas.

Photodynamic therapy method is not only very effective but also affordable for most patients, so to neglect such procedures are not necessary. Relative safety and good tolerability of patients makes it even more attractive not only as a therapeutic process, but also for prevention of various diseases.