Precancerous (condition) is the change in the tissues, which lead to the appearance of the tumor. Such processes are quite common and require prompt diagnosis, because the disease at the stage of precancerous processes easier to prevent than to cure developed cancer.

It is believed that a precancerous condition may be congenital or acquired. The cause may be genetic anomalies, adverse external factors, carcinogens, chemical, viral, long-term inflammatory processes. Usually any tumor is at the stage of pre-cancer, after all, in healthy tissues, there are no preconditions for the growth of the tumor. On the other hand, there are cases neoplastic growth de novo, that is, in a structurally unmodified tissue but most likely, these patients have simply failed to record the stage of pre-cancer, since the tumor formed and grew rapidly.

Usually pre-cancerous condition is captured in the mucosa, the glandular organs, epithelial tissues, that is where is actually cancer (epithelial tumor) in the connective tissue structures, muscles, bones, brain or heart, they are not very characteristic. This is understandable: intensive renewing skin cells, mucous membranes of the gastrointestinal tract, cervix and uterus have a closer contact with all sorts of carcinogens, and the process of continuous reproduction of cells can fail, and at some stage, there will be a mutation that will cause cancer.

a typical series of transformations of healthy tissue in the tumor

For most epithelial malignancies the most typical precancerous changes, but still part of the tumors occurs despite the well-known stages of carcinogenesis, which significantly complicates timely diagnosis and treatment.

Precancer is primarily structural tissue changes, reflecting the violation of the maturation of cells, and the clinical manifestations often are either absent or are so non-specific that do not cause serious concern. Usually precancerous process is detected in connection with other diseases, such as chronic gastritis or erosion of the cervix.

From the point of view of prognosis and risk of malignancy existing changes, it is customary to distinguish obligate and facultative pre-cancer, as well as the background state. Often the concept of background and precancerous process are identified, but they have several different clinical significance. We will try to understand how they differ and how dangerous.

Obligate precancer is a change, which sooner or later anyway becomes cancer. Usually the reasons lie in birth defects or genetic abnormalities (diffuse polyposis family). In other cases, obligate precancer may occur without hereditary factor, for example, adenomatous polyps in the stomach or severe cervical dysplasia on a background of chronic inflammation or viral infection.

The optional precancer not always transfer into cancer, it can exist for years and never degenerate into cancer, but the duration of this process is directly proportional to the risk of malignant transformation. To the optional precancer include such common processes, such as chronic atrophic gastritis, papillomas of the mucous membranes, the pseudo-cervix, the breast.

Background processes are quite right to identify a pre-cancer. If precancer is existing structural damage, reflecting the violation of the maturation of the cells, the background state is only the adverse conditions which, in turn, can lead to precancer. Typically, the carcinogenesis is development of the background changes that turn into pre-cancer, turning into a malignant tumor. 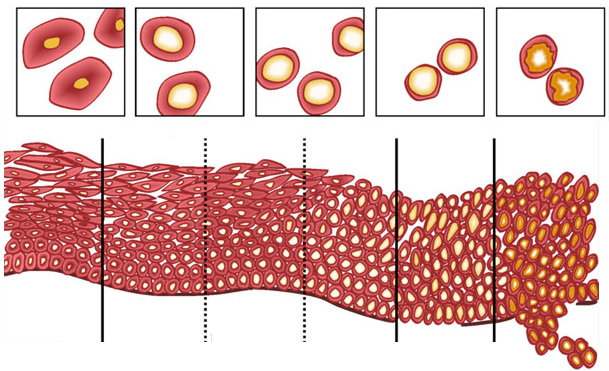 The background processes include:

Chronic inflammation is one of the most common background processes. With age, the number of patients with inflammatory process of varying localization increases. It is difficult to surprise someone with chronic gastritis, bronchitis or cholecystitis, a rare woman not heard of endometrial hyperplasia or mastitis. Each such as the apparent relative harmlessness and the possibility of multi-year oligosymptomatic the course requires oncological alertness and constant monitoring.

Atrophy, and related to many inflammatory processes occurring in the zone of scarring, chronic infectious lesions can also be regarded as a condition for the growth of the cancer.

Metaplasia characterizes the transition of one type of epithelium to another, for example, when in the stomach there are areas of intestinal structure and, on the contrary, in the intestinal – gastric.

Metaplasticity foci of stratified squamous epithelium in the cervical canal of the uterus, bronchi, urinary bladder have a relatively high chance of neoplastic transformation.

Deserve special attention, and benign tumors, especially of the glandular structure. The danger of an adenoma of the mucous membranes of the gastrointestinal tract, the genitourinary system. Adenoma is constructed from epithelial cells, which rapidly proliferate and acquire signs of atypia. In case of permanent injury to the aggressive gastric juice, intestinal contents, urine, the degree of atypia increases and threatens to develop into cancer. Adenoma of the endometrium or mammary glands are influenced by hormones, so their imbalance contributes to tumor growth and increased risk of malignancy (malignancy). These «precancerous tumor» should be the object of attention of doctors, as timely removal can prevent cancer.

A polyp is a common change, especially frequently occurring in the gastrointestinal tract and the genitals in women. It is a hotbed of proliferation of the tissue under the influence of the inflammatory process, chronic infection, hormonal changes. There are several varieties of polyps but not each of them is a true precancer.

Hyperplastic polyps in the stomach occur in response to chronic inflammation or recurrent chronic ulcer, but rather are a response to the damage and reflect the regeneration of the mucous membrane. These polyps are not considered precancerous, because they do not bear the evidence of atypical changes. In contrast, adenomatous polyps can be regarded as precancerous process.

Adenomatous polyp structure resembles glandular tumor, adenoma, prone to rapid growth, cells endowed with features of atypia, and, therefore, at some point this education is capable of becoming cancer. The only correct action when the adenomatous polyp is considered to be its complete excision, together with the supply vascular pedicle.

From the General to the particular

Theoretically, in any part of the body can be found or other precancerous changes in the relevant adverse conditions, but individual organs deserve special attention. The most commonly precancerous processes encountered in gynecologic practice and pathology of the gastrointestinal tract. Focus on them more.

Pre-processes in gynecology widespread and constitute a very serious problem, because they are found most often in young women of reproductive age. Moreover, many patients have not had time to get posterity, and pre-cancer could put this at risk, not to mention the probability of a deadly disease.

To precancerous conditions of the female organs include: 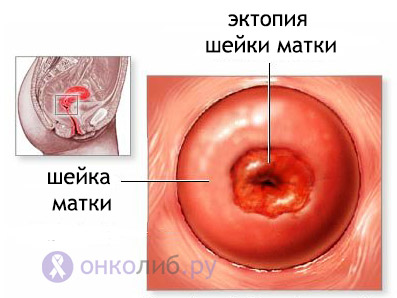 Pseudo is one of the most frequent types of cervical pathology diagnosed in the vast majority of young women. In people it is often simply referred to as erosion, but it is more correct to use the term «pseudo» or «endocervicoses». When the true erosion on the surface of the cervix is formed, the defect of the epithelium, which is rapidly «closes» a new layer of cells and disappears. Pseudo – process hormonal, meaning the development in the outer part of the cervix instead of the normal squamous epithelium is cylindrical, peculiar to the cervical canal.

For pseudo complicated with chronic inflammation (cervicitis) that occurs in response to the mucus of the glandular epithelium. A significant role belongs of chronic infection, as banal and sexually transmitted diseases. Hormonal imbalance, cervicitis and infection does not allow normal regeneration. Pseudo can exist for years, and at some point in some part there of dysplasia and cancer.

Leukoplakia is the appearance of foci of keratinization on the surface of the cervix, which look like white spots. The condition is more peculiar to women Mature and old age.

Erythroplakia – a rare change, usually in elderly patients, accompanied by thinning of the surface layer of the cervix through which the «translucent» numerous vessels. As leiko-and erythroplakia fraught with malignant transformation.

Scarring on the cervix arise as a consequence of frequent intrauterine manipulation (abortion, vysalivanie), multiple «moxibustion» pseudo-erosion, chronic cervicitis. With the right attitude towards their health, the woman herself can make efforts to avoid them, excluding, at least, abortion. As for the «burning» of pseudo, then a competent gynecologist did not advise him to do to young girls and women, and will give preference to conservative treatment or, if necessary, use the electric knife as the most low-impact tool.

Really a precancerous condition of the cervix is considered a dysplasia of greatest risk in relation to malignancy. Dysplasia is accompanied by lesions of the cervical epithelium by HPV (especially vysokokonkurentnyj strains 16, 18), found in sites of regeneration of a pseudo, in case of chronic cervicitis. 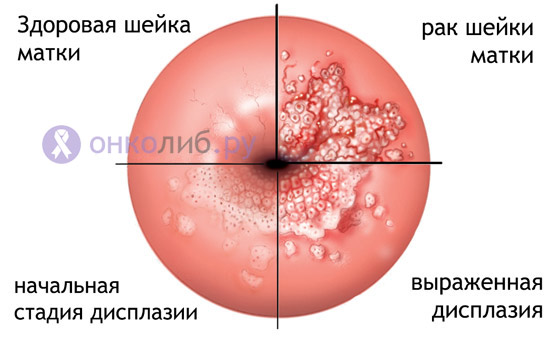 Dysplasia is a violation, first of all, differentiation of cells of the epithelial layer that encloses the neck outside. In such sites detect cell atypia, the nuclei of which are large, hyperchromatic (dark-colored), can be pathological mitoses, violations of the size and structure of cellular elements.

Depending on the amount of damage, emit mild dysplasia when changes affect one third of the thickness of stratified epithelium, the average degree to which the affected half or 2/3 of the coating layer, and severe, covering the entire thickness of the epithelial layer.

Severe cervical dysplasia is considered as non-invasive carcinoma («cancer in place»), when the tumor is already there, but not yet beyond the outer layer. Diagnosis and treatment of dysplasia at this stage can help to avoid germination of cancer cells deep with the development of invasive cancer.

Symptoms precancerous changes of the cervix small and may be absent. Pseudo may be accompanied by abnormal discharge bloody or mucous character, pain and dysplasia on a background of viral infection is often asymptomatic. In this regard, a woman should not neglect annual visits to the doctor in time to detect the problem.

To precancerous changes of the uterus include endometrial polyps and diffuse hyperplasia, which affects women middle-aged and elderly and appear uterine bleeding. With these changes, struggling through curettage of the uterine cavity.

Video: about precancerous diseases in women

Precancerous processes of the gastrointestinal tract

Another favourite localization is precancerous changes of the gastrointestinal tract, is exposed to the contact with carcinogens, injury and inflammation. The most frequently found polyps of the stomach and intestines, atrophic gastritis on a background of H. pylori infection, hereditary diseases of the intestine.

Adenomatous polyps of the stomach and the actual glandular tumor (adenoma) have a high risk of malignancy, especially if exceed in size 2 see These formations always require surgical removal, observation in such cases is inappropriate, but non-radical removal there is a risk of re-growth (recurrence). Diffuse polyposis may cause the removal of a substantial part or all of the stomach entirely.

Diffusive family polyposis, striking close blood relatives, with almost 100% probability goes to bowel cancer, and then the only possible way to avoid the tumor becomes removal of the entire organ. Single polyps of the colon usually diagnosed in the elderly on the background of colitis are also subject to immediate removal.

Video: lecture on precancerous diseases of the gastrointestinal tract

The mouth, though, and meets the first of different aggressive factors, less prone to cancer, because used food for a long time it is not delayed. Typically, the lesion of the mucous membrane of the mouth, cheeks, lips observed in smokers who turn to the expert at occurrence of leukoplakia, chronic non-healing ulcers or erosions. Another cause of precancerous processes of this localization may be wearing dentures, improperly selected or installed, and the presence of carious teeth.

Thus, precancerous processes – this is the stage of development of the disease in which the active actions of doctors help to avoid cancer in the future, so a visit to a specialist at this stage – the key to successful prevention of the tumor.