The carcinomatosis (carcinomatosis) represents one of the variants of metastatic lesions of serous membranes or internal organs. The term is usually applied to the pleura and peritoneum, which are frequently affected with advanced forms of cancer. The carcinomatosis is not an independent disease, it is rather a manifestation of other forms of cancer, can metastasize anywhere. This is both a symptom and a complication of the flow of a malignant tumor, characterize the severity of the disease and a very serious prognosis.

As is known, the malignant tumors metastasize, that is, their cells carried through the blood (hematogenous), lymph (lymphogenous route), by contact method in the body. One of the variants of the metastatic process is the defeat of the serous membranes. The phenomenon of cancer is possible thanks to the peculiarities of malignant cells lose intercellular contacts and is able to move along the surface of the peritoneum or pleura.

metastasis of the tumor

Healthy cells have special molecules that provide them the close relationship between factors of adhesion. However, in the tribulation, when a normal cell turns into a cancer, these molecules are lost, and the tumor mass is able to penetrate blood vessels and spread to a considerable distance from the primary tumor.

Up to 35% of patients with various forms of malignant tumors have signs of peritoneal carcinomatosis, and the third in ovarian cancer, and about 40% — for tumors of the gastrointestinal tract. In some cases, the presence of carcinomatosis, the reason to install it and fails, but this symptom always characterizes poor prognosis and a running shape of the tumor.

Metastases to the pleura is most common in tumors of lung and breast cancer, but possibly the primary lesion in the lining of the chest cavity cancer – mesothelioma, which likewise extends over the surface and forms new foci of growth.

The involvement in the pathological process of the peritoneum is not uncommon and accompanies tumors of the stomach, intestine, ovary, uterus, pancreas, liver.

The development of carcinomatosis?

Cell a malignant tumor that changed their structure and nature of surface proteins tend to separate from the primary tumor site and to purchase mobility, like some of the elements of connective tissue origin. The growth of the tumor changes and the extracellular matrix, which may be quite small, so that barriers to the movement of cancer cells into vessels or other tissues.

Malignant tumors can be located close to the surface of the body is covered with serous membrane (peritoneum or pleura), and the growth to infiltrate the pleura or the peritoneum. When you increase the size of its cancer cells are also able to reach the serous membrane and reach the surface. The proliferation of malignant elements may occur during surgical operations.

Once in the abdominal or thoracic cavity, a tumor cell migrates to places further «habitat», where it is fixed and gives rise to a new tumor site. With the progression of the disease is spreading neoplasia in the horizontal direction on the inner surface lining of the cavities and vertically, that is, the cancer grows into the peritoneum or pleura, is gaining weight, «acquires» vessels, becoming a secondary tumor (metastasis).

READ  Cancer treatment with baking soda according to the Simoncini: opinion of the doctor 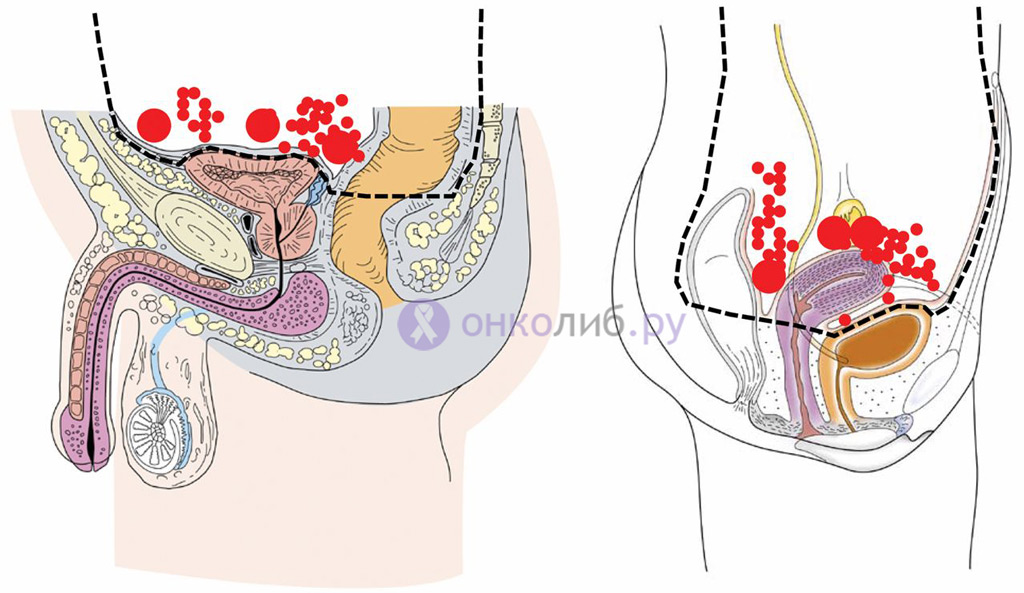 The likelihood of carcinomatosis in different types of malignant tumors depends on the localization, size and differentiation grade neoplasia. Low and undifferentiated tumors are more prone to rapid spread and early metastasis, so the frequency of lesions of the peritoneum or pleura in such cases is much higher and the prognosis is generally much worse.

Speaking about the causes of carcinomatosis, it is impossible to name the exact factors that lead to the development of this dangerous phenomenon. The importance and speed of growth of primary malignant tumors, and its localization near the serous membranes, tendency to metastasize in principle. The carcinomatosis, in all cases, characterizes the progressive disease, often in the later stages of its development. The danger of this phenomenon is that the obstacles to rapid settlement cancer serous cavities is not, and the process quickly acquires the character of a common and difficult to treat.

Since and carcinomatosis of the pleura and peritoneum has its own peculiarities of development and course, it is advisable to consider them separately.

The carcinomatosis of abdominal cavity occurs due to neoplastic pathology of the intestines, stomach, pancreas, liver and biliary system, uterus, but most often this phenomenon is accompanied by ovarian cancer. According to statistics, at the time of diagnosis more than half of the women have involvement of the peritoneum in the pathological process.

Tumors of the intestine and stomach can in the short time to reach the surface of the body, sprouting the whole thickness of its walls, and there, on the surface, cancer cells will not meet barriers to further dissemination. By the way, when undifferentiated cancer of the stomach carcinomatosis observed in more than half of the patients.

Penetrated into the abdominal cavity, cancer cells fall into the greater omentum, the deepening of the pelvis, the folds of the peritoneum between the bowel loops. In these places they are firmly fixed to the surface and begin to divide, forming a metastatic tumor lesion.

The tendency to spread over the surface of serous cover leads to the fact that after a short time a large part of the abdominal cavity can be populated by the tumor, and the peritoneum takes a characteristic appearance.

The peritoneal carcinomatosis, a photo of which you can easily find on the Internet, is the presence of multiple solid nodules or papillae on the surface of serous membranes, which will eventually increase in size and merge with each other. Such growths may resemble a cauliflower, to form small cysts cause adhesions and secondary inflammation. In the presence of fluid in the abdomen when such changes of the peritoneum practically with absolute probability it is possible to judge and malignant character pathology.

On the background of the neoplastic degeneration of the serous membrane is a violation of her lymphatic drainage functions, which leads to the accumulation of large amounts of fluid in the abdomen – ascites.

Ascites is the main and sometimes the only clinical symptom of the outbreak of carcinomatosis, which could be the reason for primary treatment of the patient for help. In an attempt to find the cause of fluid accumulation in the abdomen, specialists can diagnose cancer, the presence of which the patient was unaware.

Among others, nonspecific, signs of peritoneal lesions include:

Since the peritoneum has a fairly large area, it envelopes and covers most of the abdominal cavity, but is devoid of any anatomical boundaries, the classification of the degree of its defeat is a serious problem. The stage of the disease is determined for the tumor, which is accompanied by carcinomatosis as a complication, and in most cases the involvement of the serous membranes characterizes the cancer is grade 3-4. 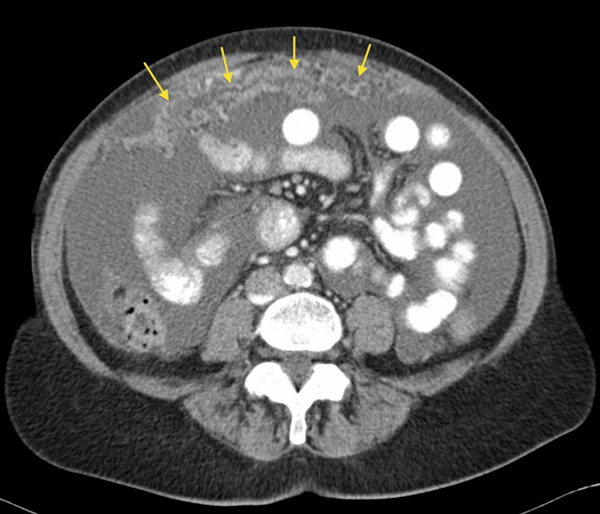 the peritoneal carcinomatosis on diagnostic picture

For a more precise description of the area affected and making prognosis of the tumor is divided into three degrees of peritoneal carcinomatosis:

For detection of peritoneal carcinomatosis and confirmation of the diagnosis of a malignant tumor using a variety of modern diagnostic methods (ultrasound, CT, laparoscopy, zytologische study ascitic fluid etc.), but in 3-5% of patients and fails to set the primary tumor, although the nature of malignant lesions of the serous membranes may be demonstrated morphologically.

Forecast when carcinomatosis is very serious, because this process not only characterizes the running form of the primary tumor, but also leads to rapid progressive deterioration of the patient, cancer cachexia and death. Life when peritoneal carcinomatosis limited to an average of 12 months, and only every tenth patient manages to overcome the five-year mark after treatment for cancer.

The carcinomatosis of the pleura

The carcinomatosis of the pleura is frequently observed in lung cancer, breast cancer, stomach, neoplasms of the pleura (mesothelioma), metastasis of any tumor can also be a cause of carcinomatosis. More often defeat pleura is the result of germination of the primary lung tumor to the surface of the organ covered by serous membrane. Peripheral cancer of the lung, located close to the surface of the body, may in a short time to reach the pleura and quit in the pleural cavity. 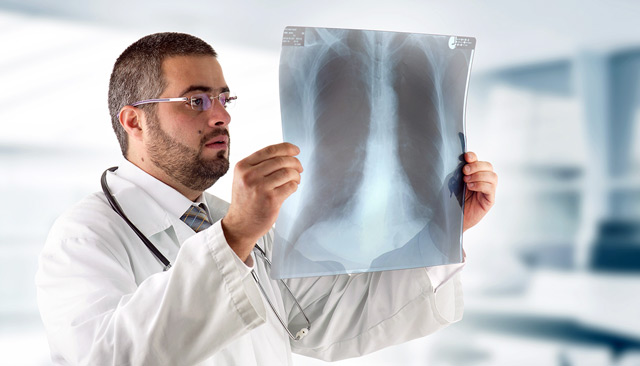 In breast cancer, thyroid cancer, sarcomas of bones and soft tissues carcinomatosis develops after hematogenous or lymphogenous skid tumor cells in the pleura.

The development of the pathological process does not differ from that in lesions of the peritoneum: the tumor cell gets to the surface of the pleura, are able to migrate to different parts of the chest cavity, is fixed in a certain place and begins to divide. Settling in the serous lining, carcinomatosis, covers all large area, resulting in disturbed natural drainage of the lymph and the accumulation of fluid, often with signs of inflammation (tumor pleurisy).

READ  Targeted therapy in cancer treatment, in Oncology, the drugs

Symptoms of carcinomatosis of the pleura:

the carcinomatosis on CT scan and radiograph

To confirm kanzeromatosny lesions of the pleura is carried out x-ray study, computed tomography and pleural puncture, and the resulting liquid Cytology and detect cancer cells. Laparoscopic examination and biopsy are shown in rare cases where Cytology has not given reliable information.

Malignant pleural effusion is always a result of running of the disease, and since he runs very hard, is aggravated by manifestations of the primary tumor, the life expectancy in the presence of such complications is small: without treatment, patients with carcinomatosis of the pleura and pleurisy do not live more than 3-4 months.

The treatment of carcinomatosis, serous membranes – not an easy task, but it is rather aimed at prolonging life and improving its quality, rather than on the complete elimination of the tumor. When surgery removed tumor, and chemotherapy helps to influence the neoplasia with chemotherapy. Since systemic chemotherapy is quite difficult tolerated by patients, requires large doses of drugs, is highly toxic, it is currently used hyperthermic chemotherapy with the introduction of drugs directly into the peritoneal or pleural cavity. Enter pre-heated solution of the drug acts locally and for a long time circulates in the cavity, and the dosage may be increased, toxic effects will be less than with intravenous administration.

In the treatment of peritoneal carcinomatosis can be used in photodynamic therapy of lesions of the pleura amenable to treatment with Roncoleukin (intrapleural immunotherapy). Development of effective way of dealing with carcinomatosis, is to this day, but the prognosis of this serious condition remains serious, given the low efficiency of used treatment.

Video: series of lectures on the treatment of peritoneal carcinomatosis