The Cytology: smear and analysis, decoding, Cytology in gynecology

For some reason everyone thinks that the Cytology is exclusively concerned with female reproductive organs (the cervix, cervical canal). Perhaps it is because the status of the cervix is the subject of casual study of any of the doctor-cytologist, whereas smear on Cytology can be applied on the glass after scraping or fine needle aspiration biopsy (TAB) from other places. In addition, it is possible to make smears-prints of the mucosa of the larynx, nasopharynx, skin (melanoma), soft tissue. In principle, in cases of suspected cancer the material on the study can be obtained from any location, however, different methods. For example, using fine-needle aspiration biopsy. Often do, if there is any doubt in relation to breast or thyroid, where cytological diagnosis plays a major role, because histological verification provided only during surgery (urgent histology) and after removal of the body.

Cytology involves the microscopic analysis (the study of the cellular composition and condition of the organelles of cells), suspicious in relation to cancer of the process and taken from any available space.

In this regard, patients should not surprise smears on Cytology, not only prepared from scrapings of the female genital organs, but also fine-needle aspiration biopsy (TAB):

Detection and diagnosis malignant tumors of soft tissues, skin, lips, mucous membranes of the mouth and nose, rectal cancer, or colon, bone tumors often begins with the study of the smears. And then add TAB changed lymph nodes and/or histological diagnosis (histology). For example, if you suspect a tumor or direct colon Cytology is the first stage of diagnosis, but cannot replace histology. 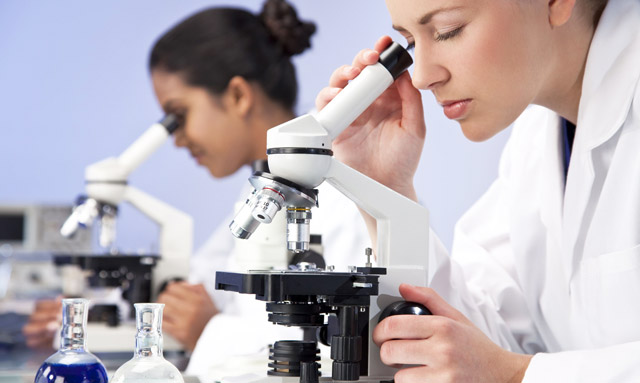 It should be noted that some bodies were not subjected to histological analysis to an operation, because it is impossible to cut a piece of tissue in the breast or thyroid, and send to research. In such cases, the main hope for Cytology and it is important not to make mistakes and not create the risk of removal of organ that could be saved by other methods.

Smear on Cytology in gynecological examination or for diagnosis of cancer disease (squamous cell carcinoma of the vulva, cervix and vagina) takes a gynecologist or midwife, deals on a glass slide and sends it to the Cytology laboratory for staining (Romanovsky-Giemsa, Pappenheim, Papanicolaou) and research. The preparation of the preparation will take no more than an hour (smear first you need to dry, and then paint). Viewing will also take more time if the products quality. In short, for Cytology need glass, prepared paint, immersion oil, good glass, the eye and knowledge of the physician.

The analysis produces the doctor-cytologist, but in other cases smears for screening after screening tests, trust the experienced technician who is familiar with variants of norm (norm – citogramma without features). However, the slightest doubt is the basis for the transfer of the smear to the doctor, who will make the final decision (to be referred to a specialist who will offer histological examination, if possible). To gynecological strokes on Cytology we will be back a few below, but for now I want to introduce the reader to what Cytology do and how it differs from histology.

Cytology and histology — the science or different?

Citogramma shows the structure and condition of the cell and its organelles. Clinical Cytology (and its an important branch – Cytology) is one of the sections of clinical laboratory diagnostics aimed at finding pathological processes, including tumor and changing the state of the cells. For the evaluation of cytological preparation there is a special scheme, which adheres to the doctor:

Cytology is of two types:

And development diagnostics performed by the physician-cytologist, and, of course, in order to see all of this he applies the immersion and the large magnification of the microscope, otherwise the changes occurring in the core of notice impossible. Describing the smear, setting its type (simple, inflammatory, reactive), the doctor also conducts the decoding of the smear. Because Cytology is more descriptive than establishing an accurate diagnosis, a doctor can afford to write the diagnosis under question (in histology this is not accepted, the pathologist gives an unequivocal answer).

With regard to histology, this study examines the tissue, which in the preparation of drugs (biopsy, autopsy) cut into thin layers using a special equipment – microtome.

Smear gynecological examination is performed using cytometry, and then the material is placed on glass (for liquid onkotsitologiyu uses a removable sitewide, which together with the material is immersed in the bottle with the special environment). The Cytology of the cervix, usually one smear (vaginal portion of the cervix) is not limited, as there is a need to study the epithelium of the cervical (cervical) channel. This is because the most problematic area in relation to the oncological process is the area of the junction (the transformation zone) is a place of transition of stratified squamous epithelium of the vaginal portion of the cervix (ectocervix) in a single layer of prismatic (cylindrical) epithelium of the cervical canal (endocervix). Of course, «lyapat» both smears on one glass in the diagnosis is unacceptable (this is possible only if the check-up), because they can mix and smear will be inadequate.

In a smear from the cervix of a young healthy woman can be seen the cells of the surface and intermediate layers (in different proportions) four-layer flat neorogovevayuschy epithelium, growing from basal cells, which normally resides deep and smear misses, as well as the prismatic cells of the epithelium of the cervical canal.

Differentiation and maturation of epithelial layers occurs under the influence of sex hormones (I phase of the cycle – estrogen, phase II – progesterone), so smears of healthy women in different phases of the menstrual cycle is different. They also differ in pregnancy, in pre — and postmenopause, after radiation and chemotherapy exposure. For example, the presence in the smear of an elderly woman more than 10% of surface cells makes suspicious, because their appearance, in addition to inflammation, leukoplakia, vaginal dermatitis, may indicate the development of tumors of the genital organs, mammary gland, adrenal glands. That’s why in the direction of the smear on Cytology is always indicated:

If necessary (if a hormonal type of smear not consistent with the age and clinical data) for vaginal drugs, the doctor performs a hormonal evaluation.

Questions cervical carcinogenesis is often associated with the penetration into the organism of a chronic resistant infection type of human papillomavirus (HPV) high-risk. The human papillomavirus (HPV) can be detected only by indirect signs (koilocyte, multinucleated cells, parakeets) and then, after the virus is activated, came from the nucleus of basal cells of the transition zone in its cytoplasm and moved to the more superficial epithelial layers. Conclusion «the mucosal epithelium with signs of papilloma infection» is worthy of special attention, because HPV, from time to time «sitting quietly» may lead to the development of precancerous and then cancerous process. 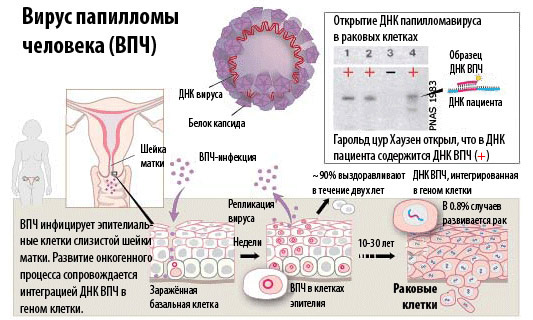 Thus, the identification and study of this Drawage virus is very important in oncocytology because it refers to the factors of malignant transformation of the cells of stratified squamous epithelium in the pre-cancer cervical dysplasia (CIN), non-invasive carcinoma in situ and finally to invasive neoplastic disease.

Unfortunately, in a smear on Cytology in women without dysplasia, but with high-risk HPV, detection of a dangerous virus is less than 10%. However, with dysplasia, this figure increases to 72%.

It should be noted that signs of HPV infection in the smear is most noticeable when dysplasia mild to moderate degree, but almost do not appear in the advanced stages of CIN, therefore, for identification of the virus requires other research methods.

The cytologic diagnosis of dysplasia (CIN I, II, III) or carcinoma in situ already think bad of Cytology (the term is not quite correct, is more correct — «bad citogramma»).

Dysplasia — morphological concept. Its essence is reduced to disturbance of the normal layers in the multilayer flat epithelium and output at different levels of the reservoir cells of the basal and parabasal type (cells of the lower layers that do not appear in the smear of a young healthy women of normal) with typical changes in the nuclei and high mitotic activity. 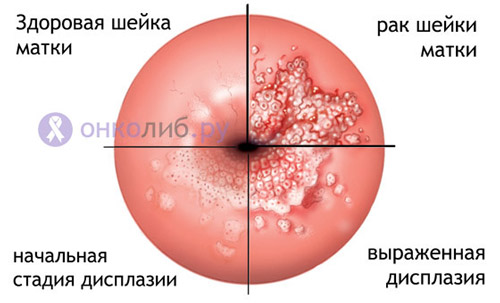 Depending on the depth of the lesion distinguish mild (CIN I), moderate (CIN II), severe (CIN III) degree of dysplasia. From severe dysplasia on Cytology smear is almost impossible to distinguish preinvasive carcinoma (carcinoma in situ). Cancer that has not left the basal layer (cr in situ), it can be hard to distinguish from CIN III and the histologic analysis, but the pathologist always sees the invasion, and if it is a fragment of the neck in which it occurs, hit the drug. In identifying the degree of dysplasia, the doctor-cytologist is based on the following criteria:

The Cytology of the cervix shows inflammation and dysplastic changes to squamous epithelium. Using cytological analysis it is possible to identify other neoplastic processes and malignant tumors of this region (squamous cell carcinoma, glandular hyperplasia with atypia to dysplasia type I, II, III, adenocarcinoma of the cervix varying degrees of differentiation, leiomyosarcoma, etc.), and according to statistics, the coincidence of cytological smear of the transcripts and findings of histology noted in 96% of cases.

Although the task of the cytologist is not viewing a smear on the flora, however, the doctor draws attention to it, as flora often explains the cause of inflammation and reactive changes of the epithelium. The inflammatory process in the cervix can be caused by any microflora, therefore, distinguish nonspecific and specific inflammation. 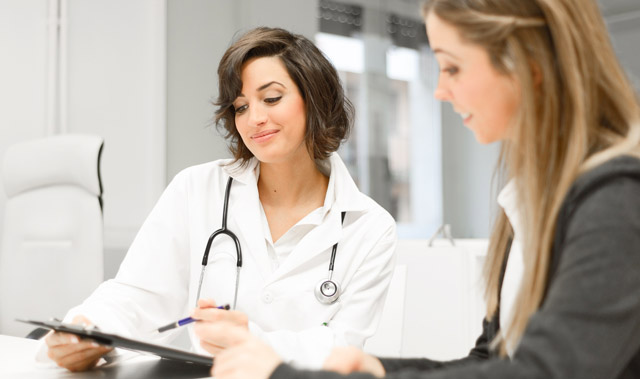 Nonspecific inflammation can be:

Cytological picture of specific inflammation, is influenced by specific pathogens, trapped in the body and which began its development in the organs of the new host. It can be:

Thus, inflammation may be caused by the presence of different pathogens of bacterial and viral nature, which has about 40 species (in the example above are just some of them). 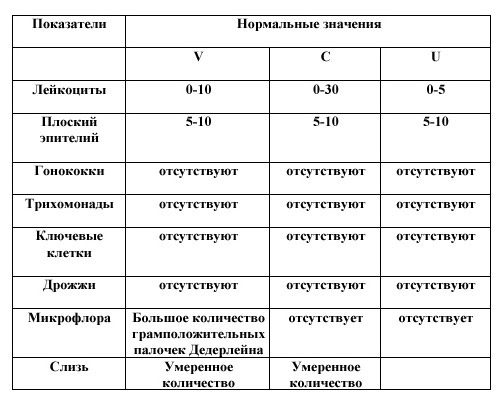 table: provisions of the smear results for women, V — material from the vagina, C — cervical canal (cervix), U — urethra

With regard to opportunistic bacterial flora and white blood cells, here it’s all about – in their amount in each phase of the cycle. For example, if the cytologist sees clearly inflammatory type of smear, and the cycle is about to end or has just begun, the presence of a large number of cells cannot be considered as a sign of inflammation, because a swab taken from a non-sterile area, and such reactivity only shows that my period will start soon (or has just ended). The same pattern is observed in the period of ovulation, when does the mucous plug (white blood cells a lot, but they are small, dark, immersed in slime). However, if truly atrophic smear, which is typical for older women, the presence of a large number of superficial cells and even a small flora already indicates inflammation.

Video: smear on Cytology and how to pass