The tumor necrosis factor (TNF alpha) that is in the blood, the drugs

The tumor necrosis factor (TNF, Tumor necrosis factor, TNF) is an extracellular protein which is virtually absent in healthy human blood. This substance begins to actively develop in the pathology – inflammation, autoimmunity, and tumors.

In modern literature one can find its designation as TNF and TNF-alpha. The last name is deprecated but still used by some authors. In addition to alpha-TNF, there is another form of a – beta that is produced by lymphocytes, but significantly slower than the first for several days.

TNF is produced by blood cells – macrophages, monocytes, lymphocytes, and endothelial lining of vessels. When injected into the body of foreign protein antigen (microbe, its toxin, the products of tumor growth) within the first 2-3 hours of TNF reaches a maximum concentration.

The tumor necrosis factor does not damage healthy cells, but it has a strong antitumor effect. For the first time this effect of this protein has been proven in experiments on mice, which were observed regression of tumors. In this regard, the protein got its name. Later studies have shown that the role of TNF is not limited to the lysis of tumor cells, its action is multifaceted, it takes part not only in the reactions in pathology, but needed a healthy body. However, all the functions of this protein and its true nature still cause a lot of issues.

The main biological effects of TNF – is:

When injected into the body of microbes, viruses, foreign proteins activates the immune system. TNF increases the number of T — and b-lymphocytes, neutrophils in inflammation, «adhesion» of neutrophils, lymphocytes, macrophages to the inner shell of the vessel at the site of inflammation. Increased vascular permeability in the area of development of the inflammatory response is due to the action of TNF. 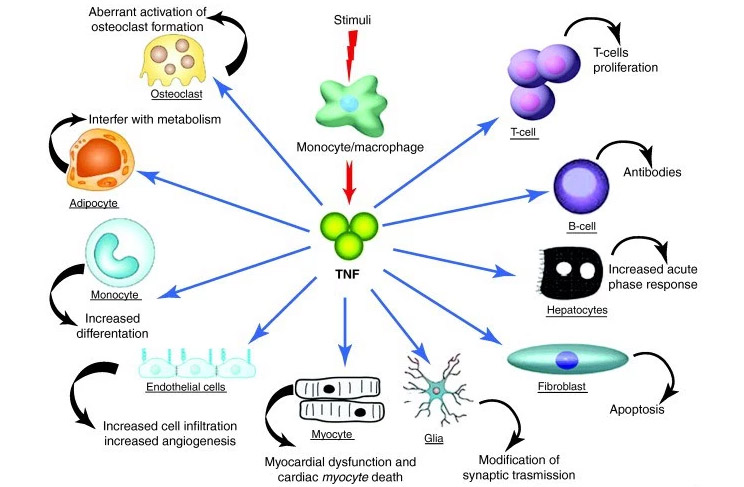 The tumor necrosis factor effect on haematopoiesis. It inhibits the reproduction of red blood cells, lymphocytes and white cells hematopoiesis, but if the blood for any reason, suppressed, TNF is to stimulate it. Many active proteins, cytokines, protective effect against radiation. This effects has an and TNF.

The tumor necrosis factor can be detected not only in blood, urine, and cerebrospinal fluid, indicating that it is the interconnection effect. This protein regulates the activity of the nervous and endocrine systems. Beta variant TNF has a predominantly local effect and systemic manifestations of immunity, inflammation and regulation of metabolism of the body owes the alpha-form of the cytokine.

One of the most important effects of TNF is recognized to be cytotoxic, i.e. cell disruption, which fully manifests itself during the development of tumors. TNF effect on tumor cells, causing their destruction by releasing free radicals, reactive oxygen species and nitric oxide. Because individual cancer cells are formed in any organism during the whole life, that TNF is necessary and healthy for timely and prompt neutralize them.

Transplantation of organs and tissues is accompanied by a space in the body of foreign antigens, even if the body will be the most suitable for the specific individual set of antigens. Transplantation is often accompanied by activation of local inflammatory reactions, which also is the action of TNF. Any foreign protein stimulates an immune response and the transplanted tissue is not an exception.

After transplantation it is possible to detect the increase in the content of cytokine in the blood serum, which indirectly may indicate the beginning of rejection. This fact is the basis of studies on the use of drugs antibodies to TNF, is able to inhibit the rejection of transplanted tissues.

The negative impact of high concentrations of TNF are seen when heavy shock against the background of septic conditions. Especially pronounced production of this cytokine during infection by bacteria, when a sharp depression of immunity combined with cardiac, renal, liver failure, leading to death of patients.

TNF is able to break down fat and deactivates the enzyme involved in the lipid accumulation. Large concentrations of the cytokine lead to exhaustion (cachexia), so it is also called cachectin. These processes contribute to cancer cachexia and wasting in patients with long-term infectious diseases.

In addition to the tumor, TNF also ensures the destruction of cells infected with viruses, parasites, fungi. His action, along with other proinflammatory proteins, causes an increase in body temperature and a local microcirculatory disorder.

In addition to the described properties, TNF also plays a reparative function. After the damage in the inflammation and active immune response increase the healing process. TNF activates the blood coagulation system, which occurs due to the delimitation of the areas of inflammation through the microvasculature. Microthrombuses prevent further spread of infection. Activation of cells of fibroblasts and their synthesis of collagen fibers promotes healing of lesions.

Determination of TNF level and its value 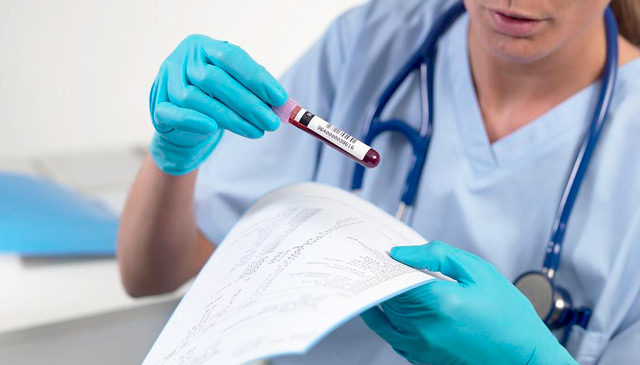 Laboratory analysis of levels of TNF does not apply to frequently used analyses, but this indicator is very important in certain types of pathology. The definition of TNF is indicated for:

Increasing the level of cytokines can serve not only as diagnostic but also a prognostic criterion. So, in sepsis a sharp increase in TNF plays a fatal role, leading to severe shock and death.

To study the patient take venous blood, prior to analysis are not allowed to drink tea or coffee is permissible only regular water. Not less than 8 hours should preclude eating any food.

The increase in TNF in blood is observed in:

In addition to increasing, and possibly reducing levels of TNF, because normally it should be present, though in minute amounts to maintain health and immunity. The reduction in the concentration of TNF is characteristic for:

The diversity of biological responses mediated TNF, has prompted research in the field of clinical application of tumor necrosis factor and its inhibitors. The most promising are the antibody, reducing the amount of TNF in severe diseases and warning of deadly complications, as well as recombinant, synthetic cytokine that is assigned to cancer patients.

Actively used drugs are analogues of human tumor necrosis factor in cancer. For example, such treatment along with standard chemotherapy shows high effectiveness against breast cancer and some other tumors.

The TNF-alpha inhibitors have anti-inflammatory action. With the development of inflammation, there is no need to prescribe medications of this group, as for the recovery, the organism must pass all stages of the inflammatory process, to form the immune system and provide healing.

Early suppression of natural defense mechanisms is fraught with complications, and therefore inhibitors of TNF are shown only when excessive, inadequate response, when the body is unable to control the infectious process.

Medications TNF blockers – Remicade, Enbrel is prescribed for rheumatoid arthritis, Crohn’s disease in adults and children, ulcerative colitis, spondylitis, psoriasis. Typically, these funds are not applied the ineffectiveness of standard therapy, hormones, cytostatics, antineoplastic agents, when it is intolerance of or contraindications to the drugs of other groups.

Antibodies to TNF (infliximab, rituximab) to suppress excessive production of TNF and is indicated for sepsis, especially with the risk of shock, when developed shock, they reduce mortality. Antibodies to cytokines can be appointed in case of prolonged infectious diseases with cachexia.

Thymosin-alpha (tinactin) relates to immunomodulatory drugs. It is prescribed in diseases with impaired immunity, infectious diseases, sepsis, for the normalization of hematopoiesis after irradiation, HIV infection, severe postoperative infectious complications.

Cytokine therapy – individual direction in the treatment of cancer, which develops from the end of the last century. Cytokines drugs show high efficacy, but self-their use is not justified. The best result is only possible with an integrated approach and combines the use of cytokines, chemotherapeutic agents and radiation.

Medications based on TNF destroy the tumor and prevent the spread of metastases, and prevent relapses after the removal of tumors. While the use of cytostatics, cytokines reduce their toxic effect and the likelihood of side reactions. In addition, due to the favorable effect on the immune system, cytokines have warned of possible infectious complications due to chemotherapy.

Among the TNF drugs with antitumor activity, applied refnot and ingaron registered in Russia. It tools with proven effectiveness against cancer cells, but their toxicity is much lower cytokine produced in the human body.

Refnot has a direct destructive effect on cancer cells, inhibits their division, causes hemorrhagic necrosis of the tumor. The viability of tumors is closely related to its blood supply, and refnot reduces the formation of new vessels in the tumor and activates the coagulation system.

Refnote important property is its ability to enhance the cytotoxic effect of the drugs based on interferon and other anticancer agents. So, it increases the efficacy of cytarabine, doxorubicin and others, to achieve high anti-tumor activity of the joint application of cytokines and chemotherapeutic agents.

Refnot can be appointed not only in breast cancer, as indicated in official recommendations on the use, but also for other tumors – lung cancer, melanoma, tumors of the female reproductive system

Cytokine therapy is assigned exclusively to a specialist about the self in this case cannot be and speeches, drugs are available only by prescription. For each patient, an individual treatment and its combination with other antitumor agents.

Video: lecture on the use of tumor necrosis factor

Video: TNF in the treatment of melanoma, lecture

READ  Cancer treatment with baking soda according to the Simoncini: opinion of the doctor
Share with friends:
Add a comment
Нажмите, чтобы отменить ответ.