Uterine fibroids – a benign tumor, more common in young women, the average age of patients is 30-40 years. Noticed that the fibroids are predisposed persons more blacks than Europeans.

Fibroids are constructed of Mature connective tissue, giving it a dense texture. Often the fibroid is identified with myoma or fibromyoma, however, from the standpoint of the morphological structure of the tumor is different. Fibroids and fibroids consist of smooth muscle constituting the middle layer of the uterus (myometrium), and fibroma – fibrous tissue. Despite the different structure and origin, these tumors have a lot in common, and therefore tactics in them are very similar. 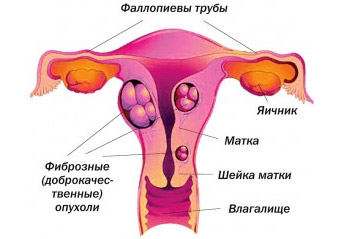 Fibroids is no different propensity to malignancy, slowly increasing in size and for a long time may be asymptomatic. Late diagnosis leads to the identification of large tumors, reaching in some cases 10-20 cm. of Course, such large nodes cannot exist without symptoms, but often the patient herself withdraws profuse menstruation or uterine bleeding in age-related changes in hormonal levels or endometrial hyperplasia, typically associated tumors.

With timely detection of the tumor is not dangerous and can be healed with conservative methods and surgery for small fibroids less traumatic and does not give complications, so it’s important to suspect the tumor process and take the necessary steps to eliminate it.

Causes and types of uterine fibroids

Causes fibroides uterine tumors is not exactly formulated, but the connection of its origin with hormonal fluctuations and heredity. So, fibroids are not affecting girls before puberty and women in menopause, and if it is revealed at last, then surely existed before the onset of menopause and asymptomatic. During pregnancy the growth of the tumor may increase, and after birth, the fibroids return to their original dimensions. This fact also tells about the undeniable role of hormones of the female body in the development of the disease.

Among predisposing factors may be noted:

Fibroma usually grows as a single dense node – node form of the tumor, although it is possible that a diffuse increase in the thickness of the wall of the uterus. Size ranges from a few millimeters to 2-3 cm, but may be more – up to 20 cm in diameter.

varieties of fibroids of the uterus

Depending on the location of the tumor in relation to the wall of the uterus, there are several varieties of it:

Found multiple fibroids, when the nodes are few and they are located in different parts of the body. This tumour is characterized by more severe symptoms and often requires radical methods of treatment until removal of the uterus.

According to statistics, only one in four fibroma the tumor is of clinical signs, in other cases the disease is asymptomatic, and the tumor may be discovered accidentally. Signs of neoplasm is determined by its size, location, and direction of growth. 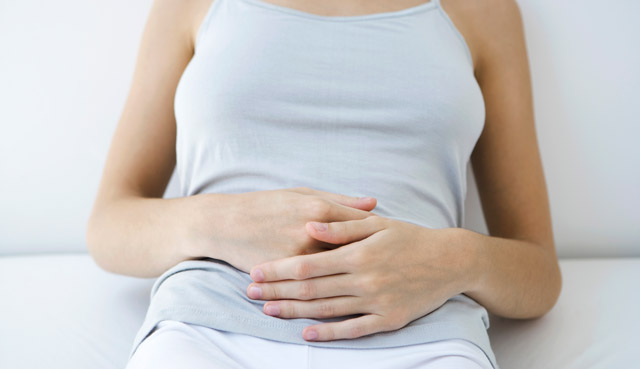 The main symptoms of uterine fibroids are pain and bleeding. Pain when the fibroid is usually associated with compression of nerve endings as the uterus and adjacent structures in the submucosal growth, when the tumor grows outwards in the direction of the walls of the pelvis. The pain is intense, cramping pull or ache in the lower abdomen. A sharp pain may be a sign of torsion leg tumor and necrosis. Usually women with fibroids complain of painful menstruation.

If the tumor compresses the bladder, there are unpleasant sensations in the suprapubic region and frequent urination. Prone to constipation and back pain characteristic of a tumor growing in the direction of the rectum and the sacrococcygeal region.

Uterine bleeding is the most common symptom of submucosal and intramural fibroids when the presence of a tumor stimulates excessive growth of the endometrium until the hyperplasia. If the bleeding is cyclical, it is called menorrhagia if chaotic – metrorrhagia. Bleeding can be so intense that they cause the anemia.

Fibroids can be diagnosed with menopause. At this age, the tumor is usually asymptomatic and tend to regress spontaneously, because there is a natural decrease in the concentration of sex hormones.

In General, most fibroids tumors occur quite benign, causing no significant violations. Threat becomes large tumor compressing adjacent structures of the pelvis, blood vessels and nerves. In addition, heavy blood loss can cause severe anemia, requiring substitution therapy, therefore, require timely treatment. The risk of malignancy in fibroids is minimal. It is believed that malignant connective-tissue tumor (cm) are initially established, without passing through a stage of purity.

Many young women suffering from tumors of the uterus, are concerned about whether they will be able to have a healthy baby? In General, small fibroids not prevent neither pregnancy nor its prosperous completion. With the exception of large fibromatous nodes and tumors located in the region of origin of the fallopian tubes when the entrance is closed by a tumor that interferes with the fertilization and movement of the egg to the endometrium.

Large fibroids pose a risk to the normal development of the fetus, as it can disrupt its normal position in the uterus, induce miscarriages and premature births. Cervical localization of the tumor in the most dangerous due to the risk of birth complications and massive bleeding. All pregnant women diagnosed with fibroids must be under the supervision of experts, and in dangerous forms of cancer is better to get rid of her before the pregnancy or childbirth, if possible.

For the detection of uterine fibroids should be the first thing to go to the doctor, which on palpation detects the increase in size of an organ or the presence of certain tumor sites. Additionally conduct ultrasound, hysterosalpingography, MRI. It should be noted that it is not always possible to distinguish between a fibroma and a myoma, particularly if the myoma is pronounced connective tissue component. In order to differentiate these tumors, a biopsy or histological examination of a removed tumor.

Uterine fibroids treated conservatively and by removal of a tumor node. The need for surgery is determined by the location, size of the fibroid, symptoms tumor.

Conservative treatment is indicated in case of small fibroids that do not cause uterine bleeding and pain, as well as the presence of obstacles to surgery (severe pathology of other organs, unwillingness of the patient). Elderly patients with uterine fibroids may be offered the observation, as in menopause, the natural decrease in the synthesis of sex hormones, occurs regression of the lesion. 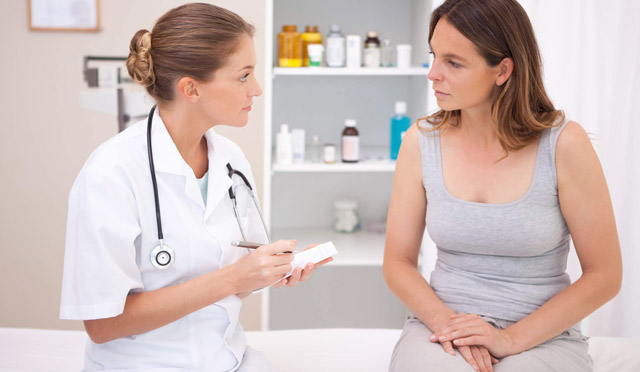 To try to heal without surgery small fibroids the tumor using hormone drugs, as well as means to reduce the negative symptoms tumors (pain, anemia, bleeding). Hormone therapy has some side effects and may be contraindicated part of the patients, therefore, the feasibility of its implementation, the choice of drug and the scheme of its reception by the doctor the gynecologist or the gynecologist-endocrinologist.

Among the most common side effects of hormone therapy include hot flashes, feeling of heat, dryness of the mucous membranes of the genital tract, emotional lability, osteoporosis. Hormone therapy should be under the supervision of a specialist and no more than a specified period of time, since inappropriately prolonged use of such drugs increases the risk of serious side effects, in particular thrombosis.

Hormone therapy is justified for small tumors in women of reproductive age or premenopausal. Because fibroids are sensitive to hormones estrogens, to treat it using products that reduce their impact on the tumor:

Surgical treatment is patients with large fibroids is rapidly growing, located under the serous membrane on a thin stalk or submucosa, with marked uterine bleeding and anemizatsii, strong pain syndrome.

The choice of surgical approach depends on the properties of the tumor and its localization. It is considered the least traumatic hysteroscopic access through the cavity of the uterus. It is good for submucosal tumors, but subserous or intramural nodes to remove with hysteroscopy is unlikely to succeed, so laparoscopy is used. Such minimally invasive interventions are shown patients younger wishing to preserve not only the uterus, but also fertility.

Large fibromatous nodes, multiple tumors, the cases suspicious of malignancy require more radical surgery. So, maybe complete removal of the uterus (hysterectomy) along with the tumor sites. It should be noted that the fibroids need in this traumatic intervention is not often.

Among minimally invasive procedures, you can also mention uterine artery embolization and ablation of a tumor node. The principles of these manipulations do not differ from those in uterine fibroids. For embolization of the uterine arteries enter the substance that causes the sealing of tumor vessels and regression of the lesion. Ablation fibroids is ultrasound, which causes local increase in temperature and «evaporation» of the tumor. The procedure is performed under the control of MRI. 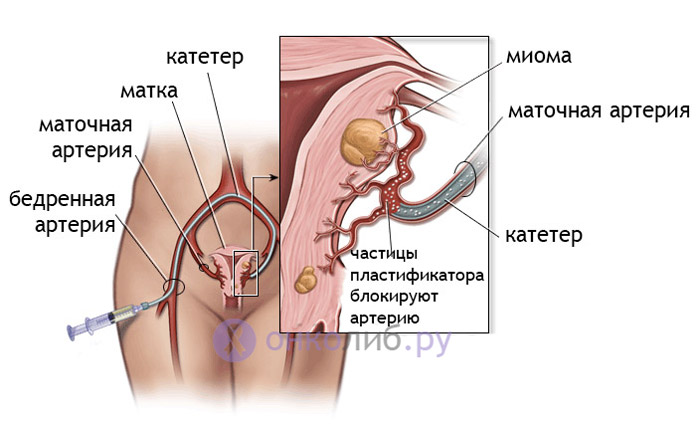 Many patients, fearing the many diagnostic and therapeutic procedures, try to treat the fibroids folk remedies. Immediately want to warn: the tumor is not reduced and will not stop its growth, no decoctions or infusions of herbs will not lead to its disappearance, so it is best to avoid meeting with a specialist.

However, the use of folk remedies is still possible to reduce some of the symptoms of the tumor. For example, the use of a decoction of nettles or oak bark reduces the intensity of uterine bleeding, chamomile helps to reduce inflammatory changes in the genital tract, often related tumors and hormonal imbalance.

The fibroid is among the tumors with low risk of malignancy, therefore, when slow growth and lack of symptoms enough observations. Timely treatment of tumor to avoid the negative consequences in the form of severe anemia, the torsion leg and necrosis of the tumor site. Specific measures to prevent the occurrence of fibroids, but there is a women wishing to avoid this disease, it is recommended to eliminate abortion in a timely manner to treat inflammatory processes of the genital tract and at least once a year to visit the gynecologist, even if there is no apparent reason.