Ankylosing spondylitis in women and men. Features of the development

Bechterew’s disease or ankylosing spondylitis in men and women

Ankylosing spondylitis is a chronic progressive disease, named after the Russian scientist who described the clinical manifestations and suggested to place it in a nosological form.

When there are inflammatory changes in the joints, mainly of intervertebral and sacroiliac.

The result — significantly limited mobility in them, and the whole spine over time takes the form of «bamboo stick».

The disease affects mainly males aged 15 — 30 years. The marked increase in the disease among women.

The reason to this day not been established. It is believed that the disease can be due to several reasons, one of which is genetic predisposition. Precipitating factor was considered as infection of the genitourinary system. 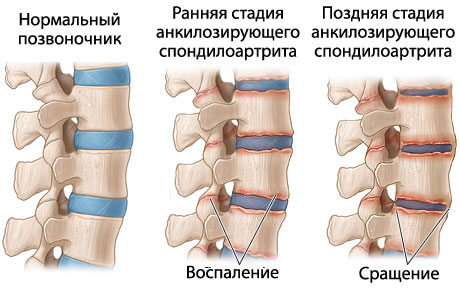 However, in recent years the preference is given to microorganisms of the intestinal group, namely, the Klebsiella. Part of scientists the greater the importance of streptococcal infection. But direct evidence of an infectious origin of ankylosing spondylitis is not.

Prevalent autoimmune theory of the origin and development of the disease. Its essence lies in the appearance of specific substances (in genetically predisposed people) as a result of precipitating factors (trauma, chronic infections) causing the acceleration of the differentiation of connective tissue cells and their transformation into cartilage and bone tissue. The formation of antigens in the affected areas contributes to ongoing immune «attack» their body.

Symptoms and characteristics of disease in men and women

Onset of the disease has no specific symptoms and develops gradually.

It begins to manifest itself by pain in the sacrum and spine, peripheral small and large joints, lumbar-sacral region radiating to the buttocks and back of the thigh, disease of the eye in iritis and iridocyclitis. Less often the disease begins with a sensation of stiffness in joints of extremities and spine in the morning, pain in the neck and back.

These symptoms at the beginning, as a rule, are not expressed in nature and does not attract the attention of the patient and the doctor.

There have been some differences in the manifestations of the beginning and course of the disease in men and women.

At first they are much sharper and with a large number of complications. After the deterioration in women not have any pain and feel for many years quite satisfactorily. Remission periods are 3 — 10 years.

Unlike men, the onset of the disease rarely manifests itself by pain in the region of the hip joints, sacroiliitis and spinal mobility to women retained in full for many years. Thus, for ankylosing spondylitis in women is much better, the symptoms below and the forecast is positive.

READ  Treatment of the main types of tenosynovitis ankle 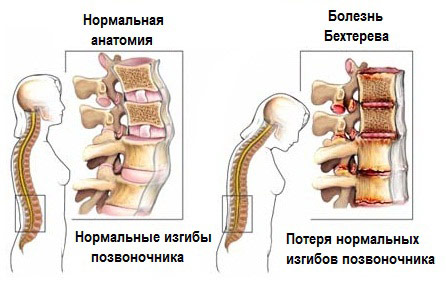 Forms of the disease also differ: women have a much more — rhizomelic. The development of the disease in men, unlike women, more often progresses rapidly, affecting the entire spine.

Depending on the localization and course of the disease there are the following 4 forms:

In addition to the above, there may be complications in the form of lesions of the aortic valves and of the heart with the development of related symptoms. The limitation of the chest contributes to the frequent respiratory diseases, pneumonia and development of tuberculosis and fibrosis of the upper lung.

Complications from the nervous system are manifested in the form of sciatica, shoulder syndrome with severe pain, and osteoporosis leads to fractures even cervical vertebrae with subsequent respiratory failure, disability and death.

READ  Sore joints fingers during pregnancy: what to do 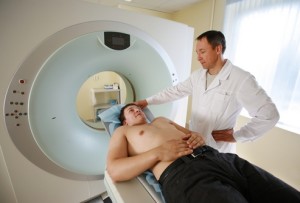 The diagnosis is based on clinical presentation and characteristic radiological studies, which are determined by: expansion of the joint space of the sacroiliac joint, their stiffness, blurring of the articular slits, characteristic of erosion with areas of sclerosis in the region of the corners of the vertebral body, destruction of the disc, changes in the field of hip and small joints and the other.

Laboratory studies of blood there are more or less specific.

Revealing of disease at early stages helps the use of magnetic resonance imaging.

It is the use of anti-inflammatory and painkillers pirazolonovogo series and derivatives of indole, steroidal and hormonal drugs, antibiotics and antibacterial drugs (in the case of inflammatory complications in other organs).

As adjunctive therapy in the treatment of ankylosing spondylitis useful to use traditional medicines. One of them is herbal, made from the roots of elecampane, Valerian, rhizome, herbs St. John’s wort and plantain, burdock, Helichrysum, ground oats and corn. A mixture of plants infused and taken in a certain dosage.

Also used rice diet to remove toxins from the body.

The use of traditional medicine should be agreed with the doctor and can be used in combination with the main treatment.

A significant effect of swimming, massage, mud treatments and therapeutic baths, and exercise therapy to prevent ankylosing pronounced changes in the joints.

To learn more about ankylosing spondylitis, and about how to treat the disease can of the video story.

Video: physiotherapy in ankylosing spondylitis. A set of exercises