The reasons for the development of degenerative disc disease of the cervical spine, the symptoms and stage of the disease

Some symptoms of osteoarthritis may occur at age 18. This is due to a sedentary lifestyle.

The disease can affect any area of the spine, there are 52 varieties of osteoarthritis.

There are 4 stages of cervical degenerative disc disease with its own characteristics and symptoms.

At the first stage affects the cartilage tissue. A person suffering from osteochondrosis of 1 degree feels some discomfort, muscle tension, but no more. Symptoms at this stage are minor and do not cause the patient desires to go to the doctor.

The second stage of osteoarthritis is characterized by the beginning of the destruction of the fibrous ring, reducing the clearance between the vertebrae, with the possible pinching of the vertebrae and the appearance of discomfort. Cervical osteochondrosis in the second degree is most common.

The third stage of the disease is characterized by further destruction of intervertebral disc, deformation of the vertebral bodies, with bone formation processes, may cause hernias(the protrusion of the fibrous ring).

In the fourth stage of osteoarthritis hurts to move, the vertebrae collapse and strongly deformed.

Cervical osteochondrosis is complicated by the small size of the vertebrae. The junction of the occipital bone of the skull with cervical vertebrae riddled with nerve endings, blood and lymphatic vessels.

READ  Violation of the statics of the cervical spine: lordosis, kyphosis, dislocations and osteophytes 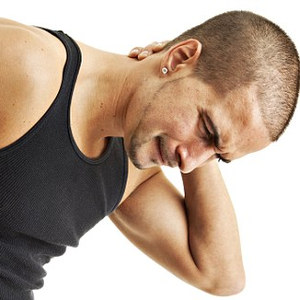 Common manifestations of cervical degenerative disc disease are headaches that occur in the head and spreading to the parietal and temporal region. During the exacerbations, the pain is so strong that it is hard to turn or tilt the head.

Compression of the vertebral artery in cervical degenerative disc disease is manifested by dizziness, flies flashing before my eyes. With a sharp turn of the head to lose consciousness. Give pain in the arms and shoulders.

The defeat of the vertebral artery is manifested as the loss of coordination, hearing and vision.

When the pinched nerve in the cervical vertebrae the pain goes from the neck to the shoulder and through the arm to the fingers. The patient feels tingling, the appearance of tingling and numbness in fingers, forearms and wrists. The pain is worse in the morning, gives in his chest.

Damage to the vertebral artery is manifested throbbing pain in the superciliary arches, the back of the head, temples. Possible loss of consciousness, nausea, pain in the eyes, pain in the heart.

Poor circulation can lead to poor memory and lower intelligence. Pressing pain in the region of the heart resemble the symptoms of true angina.

The causes of the disease is decreasing with age, physical activity, excess weight, hypothermia, disorders of posture congenital or acquired, trauma.

The disease can strike and people engaged in heavy physical work and office workers.