One of the most common diseases is disc herniation, which occurs in patients 30 to 50 years, injured or suffering from chronic diseases of the musculoskeletal system (osteoporosis, scoliosis, osteochondrosis and other).

The occurrence of hernia is due to a decrease in the number of minerals and water, entering the intervertebral disc. If you do not intervene in the process, begin the drying phase, and during extreme physical exertion – its destruction.

If we talk in medical language, disc herniation is a bulging disc that puts pressure on nerve endings and the spinal cord, causing pain in the lumbar and lower extremities.

Conservative treatment of this disease is to relieve pain symptoms, at the time, as the cause of not affected in any way.

There is no alternative?

It is the lack of an effective result and the return of neuralgic disorders have become the impetus for the cold plasma nucleoplasty.

Analog nucleoplasty is laser vaporization, which is also often carried out surgeons. The method consists in gradual heating of the disk by using laser, in which all the liquid contents of the kernel boils and evaporates.

Thus, the disk is compressed and compacted, thereby reducing the compression on the nerve root.

However, for a painless intervention, it is necessary that the liquid in the core was much, otherwise there is a risk of burning the tissue and harm the patient even more.

Therefore, this method has the age limit, making it less attractive compared with nucleoplasty.

Cold plasma nucleoplasty (or cold plasma ablaze) is a modern method, including the evaporation of the nucleus of the intervertebral disc using a special electrode, which contacts having a different electrical potential, generating a cold plasma energy, which leads to the physiological reduction in the size of tissue structures.

Thus, there is decompression of the disc, and hernia ceases to exert pressure on the nerves and spinal cord.

This technique eliminates the use of surgery in which the damaged disc is completely removed and the vertebrae are fixed with a hard mount.

Nucleoplasty is a minimally invasive way that does not require a wide incision, which makes it applicable to other indications.

In addition, this procedure is suitable for patients suffering from severe concomitant diseases (cancer, diabetes, heart disease and others).

The progress of the operation

At the preparatory stage, the patient passes all the necessary tests and refrains from taking food and fluids for 10 hours before surgery.

Also in the preoperative period is x-rayed, revealing anomalies of development and position of the vertebrae relative to each other and the possible presence of dysplasia.

Manipulation is carried out under combined anesthesia, the patient is fixed in position «on the side» and injected into the intervertebral cavity of the puncture needle, the conductive electrode cold plasma, the temperature of which does not exceed 45-55 degrees.

During the operation, carried out several such injections to purposee — drive evaporate evenly. Throughout the intervention, the operated is in the mind, but the anesthesia will eliminate all discomfort during the injections and the input of the plasma.

READ  Bandage for the ankle joint: types and indications for wearing

The procedure takes 15 to 30 minutes.

Its effectiveness is evaluated after 2 months, when it comes to normal intra disk pressure and end the scarring of the annulus, however, the majority of patients, who were subjected to cold plasma nucleoplasty of intervertebral disks, in their reviews have noted that the improvement occurred after only a few hours.

After the surgery the patient is transferred to hospital, where he observed within 2-4 hours, after this time, he is allowed to get out of bed and walk. In a satisfactory condition extract comes 5 hours after the procedure.

What are the benefits?

Nucleoplasty has certain advantages compared to alternative methods of treatment:

The main advantage of the procedure is minimal possibility of complications. They are registered at 0.1% of all operated patients.

A large part of the complications can be avoided by following recommendations for rehabilitation, including:

READ  Osteomyelitis of the spine: classification, symptoms and diagnosis

This method has contraindications, which is not much, but should take them into account for the success of nucleoplasty: 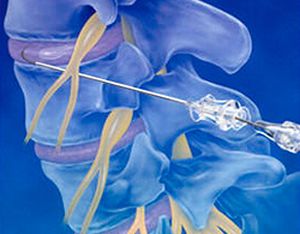 At the moment, cold plasma nucleoplasty takes leading positions among the methods of struggling with herniated discs.

She is not only an enviable efficacy and minimal risk of complications, but also absolute safety for human, as it eliminates thermal damage to the tissues of the disc.

For this service the price range in various clinics is very wide.

It all depends on the severity of the condition and the number of inflamed areas on which you want to work.