Deformity of the chest is funnel-shaped, keeled, and other types

Why have children, there is deformity of the chest

Under the deformity of the chest should be understood that the chest changed its form due to congenital or acquired causes, and it causes a negative reaction on the activity of the internal organs in the chest cavity that are related to the cardiovascular and respiratory systems.

This interferes with the protective function of the thorax and the role of the framework.

Symptoms in the form of cosmetic defects often cause psychological trauma — the child begins to avoid friends and becomes withdrawn.

In the long run this can lead to unbalanced development and impaired social adaptation of the patient.

According to the statistical study of congenital deformity affects only 2% of all births. Deformity of the chest in children is:

Deformation of the thorax acquired in the processes of life are varied and depend on the reasons that cause them. Most often occur due to emphysema (swelling) of the lungs:

Reasons for deformed thorax can be such as bad genetics and alcohol, illness, stress transferred to the future mother at 6-10 weeks of pregnancy, as this period is the formation of the chest.

At risk with acquired deformity of children in the period of active growth is from 5 to 8 and 11 to 15 years.

Congenital deformation most clearly be seen at the age of 3 years. Retraction of the sternum is balanced or unbalanced.

In addition to external inspection, to determine the degree of offset and identify changes in the internal organs used a chest x-ray, echocardiography, electrocardiogram and computed tomography.

Building a treatment plan is entirely dependent on the disease type and its severity.

Occasionally in the most simple cases, effective conservative therapy.

If the child has a funnel-shaped deformity of the chest, in the first stage of treatment of the disease use the so-called «vacuum bell», wherein above the funnel is formed a zone of negative pressure, which leads to the suction of the funnel in the opposite direction.

But it has a positive effect only if the patient is sufficiently malleable bones of the sternum. In other cases, the use of surgical intervention — stereocontrolled on the methodology of the NASS.

It is performed at the age of 6-7 years. The patient for 3-4 years is inserted through two incisions on the chest a pair of metal plates that straighten the sternum and force it to grow correctly. After they are removed, and the thorax continues to keep correct form.

When keel-shaped deformation in the early stages of using special corsets.

In a later age the surgery is performed due to the presence of cosmetic defects or malfunctions of internal organs. 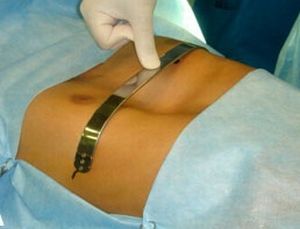 This allows you to increase your muscle correction form of the thorax and respiratory function of the lungs.

But the defect remains visible and can serve as a constant stress factor in patients who would feel physically inferior.

Cleft of the chest will be the most dangerous pathologies of the deformation.

If the operation is performed up to 1 year, the sternum is partially excised and carried out the stitching on the middle line, that enables the bones of a child latched to coalesce.

In a later age, holds a more complex operation in which in addition to resection of the sternum with the rib of autotransplantatov produce the expansion of space of the chest. Administered over the sternum titanium plate.

Basically it is various postoperative problems:

In order for your child to have a small risk of problems with the chest, you need to closely monitor his health.

To prevent chronic diseases associated with the respiratory system. To avoid the risk of mechanical injuries and burns of the thorax.

As soon as the child went to school, it is necessary to involve all possible physical labour to instill in him a love of sports.

Exercise is directed on strengthening of the spine and must include pull-UPS, exercise the lower and upper abdominals.

These activities will keep the muscles in tone and help to avoid bending of the thorax.

The video shows a patient whose funnel-shaped deformity of the chest, and a complete cure of the disease with surgical intervention.