A disorder of skeletal development of the ollier’s disease: is there a chance?

Dyschondroplasia, or ollier’s disease, is a congenital pathology of a systemic nature, which embryonal cartilage in metadatasearch and metaphyseal parts of long bones are not able to transform into bone tissue.

As a result of this process has slowed the growth and reduced the size of the bones.

This fact suggests that the cartilaginous epiphyseal growth plate is defective. Usually the disease is unilateral.

In the majority of cases of ollier’s disease affects metaphysi long bones. This is tibia, femur, humerus, forearm, tibia small.

And the first two are the most severe and serious changes. Often you can find dyschondroplasia the pelvic bones.

When the disease extends to the metacarpal, metatarsal bones, phalanges of feet and hands, abnormal changes are observed throughout the process.

More severe forms of the disease can be drawn into the process of small bones such as the talus, calcaneus, scapula, clavicle, vertebrae and ribs.

The only places that are not typical localization of the disease, are the vaults of the skull.

Today the disease is not fully understood, therefore its causes are not installed. There are hypotheses about the transmission of pathology of autosomal-dominant type of heredity.

Disorders begin to be laid at the level of embryonic development.

When the disease there is accumulation of cartilage in the form of foci protruding above the surface, resembling an exostosis.

They are placed deep in the bone, particularly the diaphysis or metafizik. During the examination, you can see that they are similar to hyaline cartilage.

Very rarely the disease is accompanied by a violation of pigmentation or the formation of corpora cavernosa. this combination say about the syndrome of Maffucci.

Foci of cartilaginous tissues grow as you get older the body, the result is a deformity of the affected bones. In some cases there is degeneration into malignant or benign tumor, chondrosarcoma or chondroma respectively.

Dependent on the extent of the pathological process, ollier’s disease is divided into the following forms: 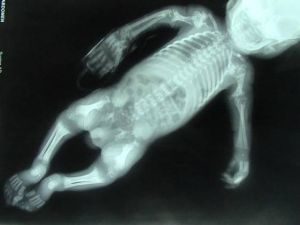 In addition to this classification, the nature of the disease of the skeletal system are divided into:

The symptoms of disorder

The clinical picture may appear between the ages of 0 to 6, and sometimes up to 10 years. Such a long period of time due to the dependence of the localization process.

First of all the ollier’s disease begins to manifest itself in lesions of the feet. When it comes time for the child to start walking, noticed the shortening and deformation of limbs, the curvature of its axis.

With the defeat of the growing zone the length of the patient bone can be less than 20-30 cm in comparison with healthy.

If the pathological process spreads to the arms, there is a thickening and deformation of the respective bones. It can be the phalanges, humerus, radius. The first symptoms in this case begin to disturb 4-5 years.

In some cases, can present tumor-formation-spherical form. Amid all these changes the pain is not observed. 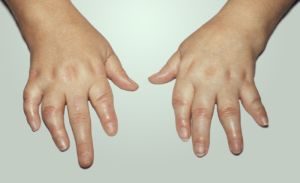 In addition to these symptoms, can develop a valgus deformity of the affected joint (knee, hip, ankle). This motion are fully preserved.

Can also develop a gait disturbance in the form of lameness. If symptoms are severe, patients may disturb the recurrent pain. It should be noted that the clinical picture is clearly expressed only in adults, children celebrate the manifestation of the disease at a low level.

READ  Low back pain: army if the problems are minor

The final diagnosis is established after visual inspection and x-ray research method.

The latter shows a clear picture, characteristic for this pathology. The size of the affected long bones is significantly less in comparison with the same healthy.

Metaphysi look swollen and thickened, visually reminiscent of a Mace. The diaphysis have a curvature, the degree depends on the progression of the disease.

The locations of chondromatosis nodes there is a lack of bone tissue, its areas are the lightest areas. They are inhomogeneous. Thickening of the epiphysis is caused by thinning and lifting of the cortical layer over the lesions. Parietalna no reaction.

If dyschondroplasia strikes the blades, that cartilage lesions located closer to the periphery of the Central part of the bone has a normal bone structure. With the involvement in the pathological process of the ribs, is observed localizing in the front ends, their swelling is not typical.

To get rid of this disease can including therapeutic methods:

Each of them requires a professional approach podiatrist, as the sprout zone of the epiphysis is very difficult to influence.

It is necessary to combine these methods to obtain the desired result.

Most patients with a similar diagnosis need surgical intervention.

His goal: removal of foci of cartilaginous growths resection or curettage, as well as the elimination of the phenomena of deformation and for bone grafting.

Shown this treatment with a significant shortening of the affected limb and the presence of strong deformation. 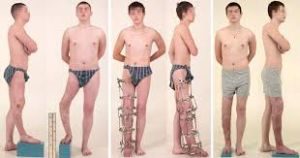 You also need to provide surgical intervention in severe forms of the disease localized in the hands and feet, otherwise, to avoid large deformations in these places will fail.

Rebirth chondromatosis nodes in malignant tumor is an absolute indication for surgical intervention.

If dyschondroplasia the prognosis is favorable. If the time to carry out the necessary treatments, you are able to prevent even residual effects. In severe forms may be a slight limp.

READ  Dislocation of the knee joint: how to treat the disease

Complications occur very rarely. This could be the dawning chondromatosis nodes to the tumor is benign or malignant nature.

With prolonged lack of treatment amid a shortened limb may develop curvature of the spine.

Signs of this process are gradually increasing pain and swelling in the affected bone.

When x-ray can be detected areas of destruction. They are for a short period of time increase in size and destroy the cortical layer.

As the cause of the disease is not precisely determined, specific tips that help to prevent the formation of cartilage lesions is difficult to give. 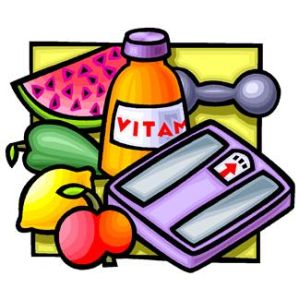 But in connection with the hypothesis of a disruption in the process of embryogenesis in a pregnancy comply with all recommendations of the doctor, maintain a healthy lifestyle, to avoid the influence of harmful environmental factors that can cause problems with a bookmark organs and systems of the fetus.

Thus, it can be argued that a disease such as dyschondroplasia is a serious congenital disorders to get rid of that is difficult.

Therefore it is better to try to prevent the development of this disease, and if diagnosed, should immediately begin treatment.