Fracture of the patella with displacement and without: treatment and rehabilitation

Treatment and consequences after a fracture of the patella

The patella is a flat, curved bone. It is the largest sesamoid bone in the skeleton. It is located in the tendon of the quadriceps femoris, which runs from the front of the knee joint.

The patella consists of the top and base. The base is on top, it is broad, with rounded edges. To it is attached the tendon of the quadriceps femoris.

The tip of the patella is elongated and pointed at the end, it is attached to the ligament.

Rear patella has a smooth articular surface, almost all of it is covered with cartilage and adjacent to the femur.

It is divided into vertical scallop into 2 parts. One of them is called medial and the other lateral. The front surface of the patella is covered with periosteum, it is convex and rough, there are many openings for vessels.

Until about the age of two patella is a cartilage, and closer to 5 years starts to happen its ossification.

The patella is well detectable through the skin and is easily displaced in different directions with a bent knee.

The patella protects the femur and tibia from lateral displacement. It moves up and down the grooves of these bones during flexion-extension of the legs and does not allow them to move due to its projection on the rear surface.

In addition, it increases muscle strength, thereby improving the efficiency of their work.

The patella serves as a shield, since it protects the joint from injury. He takes the hit, this explains his frequent sprains and fractures. According to the international classification of diseases fracture of patella S82 has a room.0. 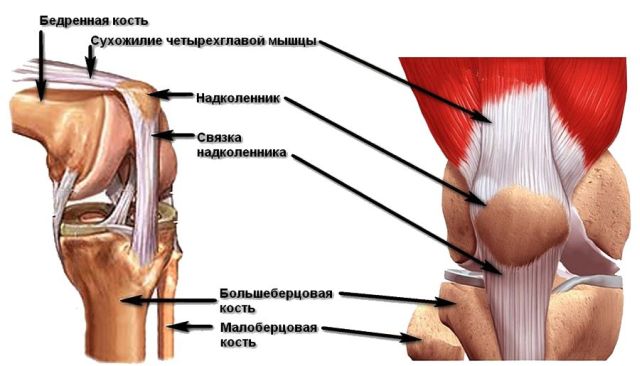 What happens when you fracture

At fracture of the patella the joint is immediately increases in size due to internal bleeding – is bleeding into the joint cavity.

The upper chip is always shifted up as a result of muscle contraction. Formed a huge bruise, which after a while drops down to the feet.

The kneecap may break in a fall on the bent knee, during an accident or excessive blow to the patella.

To break it simply. It mostly happens at the age from 20 to 50 years, and for men in 2 times more often than women.

The variety and nature of the injuries

What types of fractures are.

First, fractures of the patella, as with any fracture in General, can be closed or open.

In a closed fracture the skin remains intact, and when open they rush through them and you can even see the bone itself.

An open fracture requires longer treatment, it can cause a number of complications because they can be damaged not only the muscles but also ligaments tendons.

There is a shift or not?

In addition, fracture of the patella may be offset and without it, and also – multisplintered.

The easiest option – when there is no offset. Bones adjacent to each other, and with rare exceptions during the entire period of treatment are in place.

Usually this occurs when the patella is broken vertically, because the muscle runs along the line of the longitudinal fracture.

In the case of fracture of the patella with displacement of bone fragments require urgent surgical intervention, in order to connect the fragments. This is done using wires or bolts that can be removed only after 2 years after surgery.

The degree of bias depends on the degree of damage to the lateral stretching of the tendon of the extensor apparatus. If he was not injured, the offset may not be. When his big break chip moves upwardly under the action of muscular strength.

With displacement are most often fractures of the transverse, or horizontal, because the tendon of the muscle that is attached to the upper part of the patella, pulls him up, the pieces divide, and between them a gap. 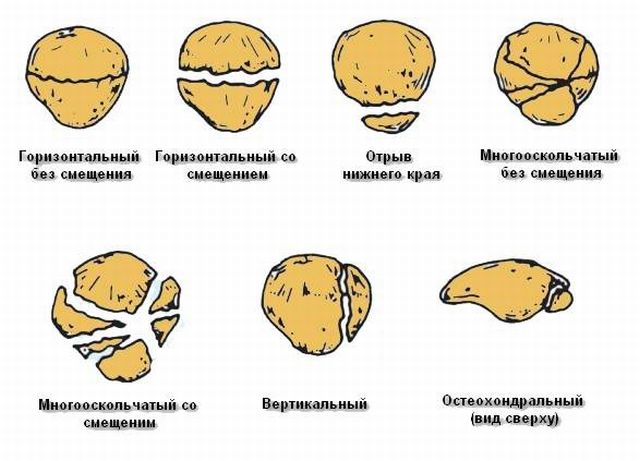 Transverse fracture the most common.

When a bone breaks into several parts, the treatment is very complicated. This type of fracture requires a fairly complex operation.

Small pieces of the edges are removed. The rest of the parts are held together by wires and bolts.

In the most severe cases the patella has to be removed completely, but only do this when not even a 1 chance to restore it. This type of fracture can occur if the blow was the big force and at high speed.

The symptoms and signs of trauma to the kneecap

Fracture to recognize quite simple:

Be wary if a bruise is rapidly growing, the swelling is enhanced and sensitivity is disturbed. These are signs of a fracture with displacement.

Through the skin it is possible to probe the edges of fragments of the patella.

How to give first aid in fracture of the patella?

Do not forget that any attempt at intervention may lead to tragic consequences, so the first thing you need to do is bring the victim to the hospital or call an ambulance.

During transportation the leg should be straightened. Can be applied wrapped in a towel ice.

How to treat the injured patella? 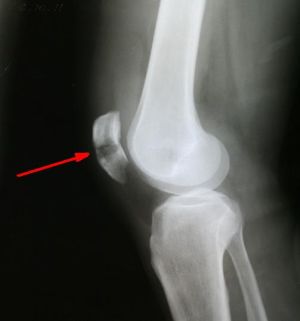 Treatment after fracture of the patella depends on the nature of the injury. In some cases it is possible to do conservative treatment, and sometimes require emergency surgery.

First, you need to make a diagnosis. This makes the x-ray will determine the extent of the fracture and the likelihood of pathologies. As an additional examination can do an MRI or articular puncture.

Also need to figure out a torn ligament or quadriceps tendon.

Only an accurate diagnosis, your doctor will prescribe the appropriate treatment.

If the fracture is closed and there is no bias, or it is, but not more than 0.5 cm, and the ligaments are not damaged, treatment should be conservative, i.e., the imposition of a plaster bandage for a few weeks (usually 3 – 4).

The leg should experience the lowest possible load, for this use the crutches. Fully operability must be restored after 2.5 months.

If the offset is greater than 0.5 cm and the damaged ligaments required open reduction and crosslinking of the fragments. The surgery is performed under General anesthesia.

Done a vertical or curved incision, to allow access to the patella. The joint cavity is freed from blood clots, small particles of cartilage and bone, if any. Then the fragments are mapped, recorded a special forceps and connected with wire or bolts.

READ  Treatment of bursitis of the foot folk and traditional media

Fracture of the patella with displacement without surgery are impossible to eliminate, and if you leave, then the patella may not grow, it will lead to the loss of extensor function.

After the operation is also superimposed plaster bandage for a period which is determined by the operating physician. 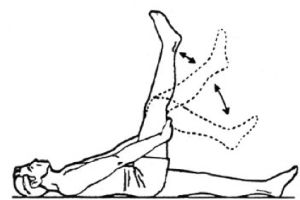 Rehabilitation after fracture of the patella is very important, not less important than the treatment itself, especially for injuries with displacement.

The first few days after surgery to keep the leg as high as possible to the joint is not swollen.

Periodically, you need to do an x-ray to control the patella heals properly. Sometimes you have to roll out of the joint in the blood through injections.

After the fracture is prescribed physiotherapy, exercise therapy, massage. You also need to do special exercises to restore muscle strength and establishment of natural movements in the joint.

Of the most effective exercises are the following:

The cast must wiggle your toes to avoid blood clots.

Fracture of the patella can have unpleasant consequences and complications.

It can be muscle weakness. This is normal at first, but in some people it passes and after a full recovery.

Sometimes when the fracture is damaged and the cartilage, which threatens the development of arthritis.

In addition, after the fracture can constantly feel the pain in the knee joint, which becomes chronic.

Fracture of the patella are not uncommon. It will in most cases require surgery and a long recovery.

Therefore it is best to avoid situations that can lead to injury, which is often fraught with unpleasant consequences in the form of complications.