Prevention and treatment of hip dysplasia in newborns

Deviation in the development of the hip joints today called dysplasia. In former times this disease was determined as a dislocation of the hip. With this diagnosis may be a violation of various structures of the joint, including the femoral head, acetabulum and connective tissue. The way the thigh is positioned relative to the glenoid fossa determines the severity of pathology.

The remarkable fact that newborn babies the hip joint is not yet fully developed structure. This is not in itself of danger and falls under the definition of the norm, as over time the measure of how well distributed the load is, the formation of bone and connective tissue. But there are some indirect signs that help distinguish pathology from normal development of the hip joint.

The probable reasons of development of pathology

To determine which factor was the cause of the formation of hip dysplasia in each case is almost impossible. But there are a number of probable causes, each of which could serve as a starting point to the beginning of the development of deviations:

Risk, form and stage of dysplasia

READ  Plantar fasciitis and its treatment of folk remedies: iodine and other ways

Taking into account the fact that newborns hip joint is still not fully formed and that is the norm, there is a possibility of misdiagnosis of disease, as immature joint is in the boundary condition, but also no violations in its development. It is therefore important to get the results of full survey before to diagnose because clinical signs are not always obvious.

Risk group includes cases where the joint is not fully formed, and much depends on how effective will be the preventive measures.

Also noted that this pathology is found in girls more often than boys.

To classify hip dysplasia in neonates in stages:

There are also several basic forms of this pathology, as it can occur otherwise, in addition to dysplasia of the acetabulum. There is a rotary pathology of the hip and dysplasia of the proximal femur. To diagnose one of the forms of deviation, it is necessary to survey, which will include measurement of the cervico-diaphyseal angle of the joint and bone geometry.

Main symptoms of the disease

Both parents and doctors have the opportunity to observe various clinical symptoms of this deviation, however, according to statistics, there are cases 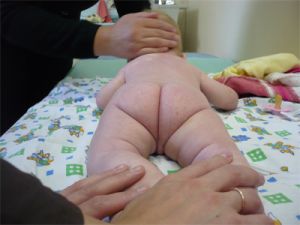 when perfectly healthy children, there were signs that characterize dysplasia.

That is why visual examination is insufficient for diagnosis, and the symptoms are only an indirect manifestation of the deviation. There are a number of characteristics:

Diagnostic methods for the timely detection of the disease

The first step aimed at identifying the possible deviations in the development of the skeletal system of the child should be the examination of the orthopedic surgeon. Still in the hospital the doctors through the clinical signs to determine the presence or absence of this disease.

But parents are advised to visit a specialist, when the child turns 1 month, and then to repeat the examination in 3 months.

In the presence of disputable evidence of a doctor will direct further testing: ultrasound or x-ray. It is important to know that ultrasound is ineffective in the diagnosis of dysplasia, as this is quite difficult to avoid large errors in the measurement of the geometry of the bones. X-rays give much more accurate results, however, due to the physiological peculiarities of the organism of the child, it is recommended to carry out no earlier than 4 months baby.

Parents should know that early diagnosis of this pathology allows to quickly and as painlessly as possible to cure the child. The later is determined by hip dysplasia in newborns, the harder methods of treatment and longer recovery period. 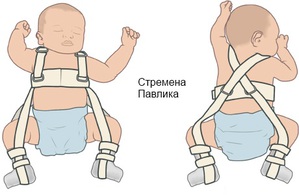 The absence of any action to promote the correct formation of the hip joint or straightening of the emerging deviations, will lead to the deterioration of the structures of the joint. Also compounding the situation is the increase in body weight as the baby grows, as this increases the load on the joints and causes irreversible deformation, which is corrected only surgically.

If the detected dysplasia in a newborn is almost always enough to use conservative treatment, it is possible to do without surgery. The main place in the correction of abnormalities of the hip joints is given orthopedic tools, including:

In addition to the use of orthopedic appliances is recommended to massage, physiotherapy or electrophoresis. Often with the use of bus bars or stirrups are assigned to all of these additional methods of treatment.

The prognosis for cure and prevention

The vast majority of newborns with a diagnosis of «dysplasia» after a short, but timely treatment recover.

One important aspect here is the level of neglect of the child. Sometimes in severe cases to correct the situation is possible only through surgery.

As a preventive means, it is recommended regardless of the schedule orthopedic massage, to wear baby on the hip, if he is holding back, to use the method of wide availability.

Video: Preventative exercises and massage methods in the early stages of dysplasia