Herniation of the cervical spine: a variety of symptoms and methods of treatment

Intervertebral disc herniation in the cervical spine is a fairly common condition that is often first diagnosed in middle-aged people.

The thickness of the disc between the vertebrae in this Department, as a rule, not large. Accordingly, the space between adjacent vertebrae, as the place for the passage of nerves, not also large, which allows even subtle and minor the size of the hernia cause compression of the nerve fibers, causing pain and other neurological disorders.

The variety of manifestations of herniated cervical?

Depending on localization of hernia symptoms can vary. Considering how nerve ending are affected hernia, place and nature of the manifestation of pain and other neurological symptoms can be divided into several groups.

When pressure on the fifth nerve root (located between the 4 and 5 vertebrae, following the roots lying, respectively, on a single vertebra) can cause muscle weakness, pain in the shoulder and, mainly, of the deltoid muscle. A change in the sensitivity this often does not happen.

The impact of the sixth nerve root often leads to weakness of muscles responsible for flexion at the elbow (mainly biceps) and extension of the wrist. In the area of the thumb is not uncommon soreness, tingling and numbness.

For lesions of the seventh nerve root characterized by the same symptoms in the triceps (muscle, whiling away is the back of the shoulder and is responsible for straightening the arm at the elbow) and the extensors of the fingers, as well as pain and paresthesia (numbness, tingling) in the lower part of the rear shoulder and middle finger.

With involvement of the eighth nerve root there is a weakness in the hands and the presence of pain and paresthesias in the little finger.

READ  Fracture of the condyles and other parts of the tibia: treatment and recovery time

You can add that the symptoms are the most common, but taking into account the individual anatomical characteristics of a person, they can show different degrees of change in each case.

Options for the diagnosis of the disease

The diagnosis of this pathology is based on the receipt of clinical data (complaints and inspection), as well as the conduct of special instrumental methods. The best method of diagnosing herniated discs is considered magnetic resonance imaging, which allows to obtain accurate images of any minute changes and is completely non-invasive (without invading the tissues of the body) method.

Computed tomography in combination with myelography is also very revealing. However, due to the fact that for carrying out this manipulation it is necessary to introduce a dye stuff into the cavity of the spinal canal, its purpose usually is auxiliary.

The use of imaging in isolation (without myelography) not allow in this case to obtain the necessary information.

As for the diagnostic method can be applied electromyography, the essence of which lies in the study of response to electrical stimulation of individual muscles. It often helps to discard the suspicion of other diseases that have similar symptoms with herniated discs.

Herniation of the cervical spine in the vast majority of patients responds well to conservative (non-surgical) therapy, which at its core aims to eliminate pain and related neurological disorders.

Pain result from pressure of a herniated disc on the nerve fibre in combination with inflammation of the surrounding tissues, therefore, justified the use of nonsteroidal anti-inflammatory drugs.

In addition to drug therapy, there are a number of nonsurgical treatments that can help relieve the symptoms of the disease. These include:

In cases of failure of conservative treatment proposed operation, the success of which according to different sources is 95 – 98%.

You can run the following types of transactions:

READ  Cervicobrachialgia vertebral and nevertebralnah: what is it, symptoms and treatment

The probability of complications in the surgical treatment 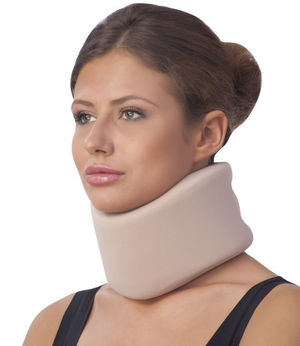 Possible complications of surgery for hernia disk can include damage to the trachea, esophagus, blood vessel (1 case per 1000 operations).

About 1% of cases, the delay during the operation the recurrent laryngeal nerve can cause hoarseness, which usually goes away within two to three months. Sometimes the fusion (merger) may become insolvent, which leads to instability of the vertebrae and of the need for re-operation. Less than 1% of cases observed infectious complications.

Operation with front access are less traumatic, so can be run on the principle of «surgery of one day» (outpatient or conduct in the hospital for more than a day).

After the surgery in most cases is shown wearing an orthopedic cervical collar, as well as the temporal limitation of physical activity.

Exercise in the treatment of herniated cervical. Video