Osteosarcoma (osteogenic sarcoma): the symptoms and treatment of bone tumors

One of the types of cancer is bone cancer. This is a rather rare disease, which mostly affects adolescents and the elderly.

Bone cancer is diagnosed infrequently and is 1% of all malignant tumors. Unfortunately even though the disease is rare, but it is characterized by the rapid development of metastasis and symptomatic and poses a risk to human health.

In recent years, thanks to discoveries in the field of radiosurgery and the latest treatment methods, the prognosis for cancer of the bone is favorable. Today there are several types of bone cancer.

The most common form is osteosarcoma.

What is the feature of this tumor?

Osteosarcoma — a malignant disease affecting the bone, but like many other tumors can spread to nearby tissue.

In this case, muscles, tendons, peripheral nerves. In addition, the disease can metastasize to neighboring organs. Most frequently they are lighter, less bone, brain and others.

The characteristic feature of osteosarcoma is that the tumor cells start to produce osteoid (immature bone).

In this regard, though it appears inert substance, but it lacks calcium. The causes of the disease are not fully understood, but still, call the main risk factors: rapid growth, various injuries and diseases of bones, x-ray irradiation.

Osteosarcoma typically occurs during childhood and adolescence, in the period of intensive growth of bones.

Sometimes the disease affects the elderly. About 10% of patients with the disease, people older than 60 years. Observed disease and 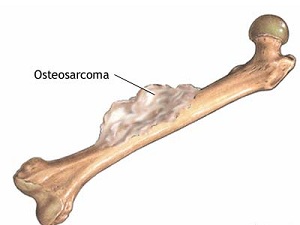 some genetic abnormalities. Bone tumors are much more common in men than in the fairer sex.

Per 1 million population in the world, each year are diagnosed 2-3 cases of osteosarcoma. In the United States to register annually about 900 patients with these diseases in Russia, this number is slightly higher.

Despite the insidious disease, with timely treatment and proper treatment, chances of recovery are very high.

For the most part the disease affects long bones, so very often occurs in the knees. It bone cancer in children and adolescents, in most cases, localized close to the knee joint.

Frequency of localization of the disease one of the first places occupies the upper division. However, the lower limbs are affected 5 times more often top.

Moreover, osteogenic sarcoma may develop in the following areas:

The bones of the skull suffer rarely, mostly this disease can be diagnosed in older people.

There are three degrees of the disease: low and high malignancy and stage of the tumor metastezirovanii.

Low degree may extend beyond the periosteum, metastasis, and almost no any symptoms.

Osteogenic sarcoma of high malignancy grade the most common, it is characterized by symptoms, metastases are absent.

The most common subtypes such as osteoblastic, chondroblastoma, and fibroblastic. Stage disease that has metastasized, characterized by the destruction of the bones and other organs. 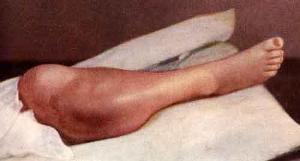 For the most part the disease metastasizes to the lungs can also affect other bones and organs. This is the most severe disease recorded every fifth patient with osteosarcoma.

For the most part, the degree of malignancy determines the prognosis of the disease. For example, after complete removal of tumors of low degree, the result is quite favorable.

A high degree of disease requires surgery and chemotherapy treatments. The Outlook for the metastatic stages of disease-not exactly comforting.

At the initial stage of the disease the symptoms are practically occur only when the disease starts to progress arise the patient’s complaints of pain over the affected joint, that become more visible when exercising at night can also cause lameness. The pain is dull, gradually increasing.

Very often patients take these symptoms for signs of neuralgia and myositis, which leads to a worsening of the disease and disappointing results.

With the development of the disease process there is a tumor, which increases with time, there was a swelling of the joint, the pain becomes even stronger.

In rare cases, it may be a fracture of the femur or other bones. At a later stage there are signs of a General nature: fatigue, sleep disturbance, fever, etc.

As the disease is very active and is characterized by aggressive growth, there are metastases in nearby organs.

The primary diagnosis of the disease based on the results of laboratory and instrumental examinations. The final conclusion is carried out using x-ray, which is the center of destruction of bone.

Upon detection of the tumor to be biopsied. More closely examine the tumor and surrounding tissue allows computer imaging so you can get more information about bone marrow cavity of the bone and to detect metastases.

In addition, for the detection of metastases bone scan is often used. In some cases, accurate diagnosis of the disease is also used positron emission tomography. 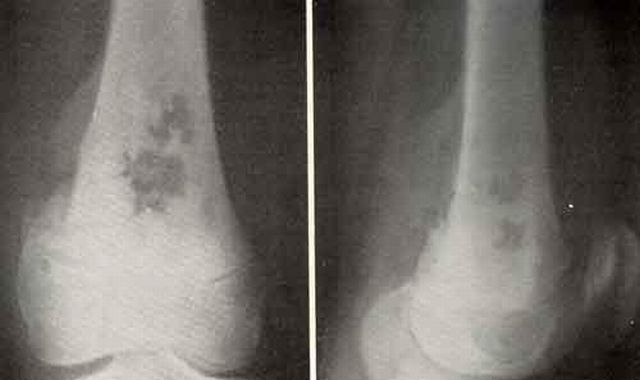 In the recent past, the treatment of the disease was limited to amputation of limbs. Today, with the advent of latest techniques of treatment there are more gentle ways.

The purpose of this therapy is the complete removal of the tumor and inhibition of cancer cells. In cases when the bone is removed along with adjacent tissues, it is replaced by an artificial prosthesis or bone implant.

For children and adolescents recommend the use of implants, they provide an opportunity for the growth of the child to increase their length.

In addition, the widely used surgical removal of large metastases, particularly in lungs. 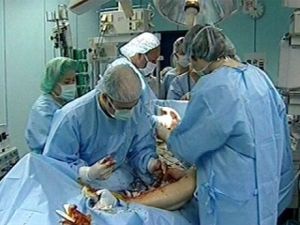 As osteosarcoma progresses rapidly, in addition to removing the tumor is necessary chemotherapy, which is also used as a preoperative period and after surgery. It helps to destroy cancer cells and to increase the chances of recovery of the patient.

Chemotherapy is personalized for each patient and assigned an oncologist.

Sufficient funds among chemotherapeutic agents are considered: high-dose methotrexate, etoposide, ifosfamide. If you cannot remove the tumor, radiation therapy is also used, although this is not always effective.

READ  Muscle relaxants of Central action: a list of the best drugs

In addition to these treatment methods, widely practiced by the biotherapy, which stimulates the immune system and helps the body fight cancer cells.

The forecast is improving every year

In connection with the advent of new and improved methods of therapy of osteosarcoma, in recent years, treatment outcomes have improved significantly.

According to statistics, about 60-70% of patients, in which no detected metastases, are on the mend and have a good chance of recovery. Most efficiently serves the treatment of localized forms, since they have good sensitivity to chemotherapy.

Special preventive measures in terms of the disease does not exist. But all the same, experts recommend to undergo regular routine examinations and in case of detection of pathology in time to begin treatment.

Anyway, you need to strengthen your immune system, to avoid excessive physical exertion and injuries of the bones, take zinc and phosphorus, which is so necessary for bone health.

Although the tumor of bone is quite a serious disease, we should not lose heart. If the diagnosis time is selected, competent treatment of a doctor and compliance with all required measures from the patient, significantly increase the chances of recovery.